Floods and Fires Destroy the East 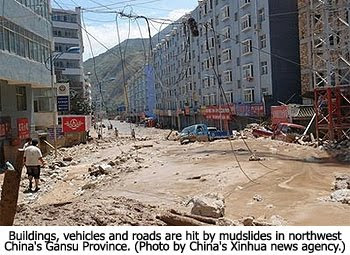 “Asia flooding plunges millions into misery,” so reports the Associated Press in their Sunday, August 8 article by Christopher Bodeen. Reports out of the Eastern Hemisphere are dire:

In the latest deluge in a summer that has seen China’s worst seasonal flooding in a decade, heavy rains over the weekend have caused the Bailong River to burst its banks, creating flooding and subsequent mudslides that have devastated towns in northwestern China. Flotsam has blocked the river creating a tidal wave of mud, rocks and water which crashed down on the Gansu Province, ripping houses from their foundations and tearing six-story apartment buildings in half. Houses are slogged in mud, cars are encased in debris, and streets are buckled beyond use. To make it even worse, emergency response has been hampered by the mountainous location.

The loss in human life has been tragic as an estimated 1,300 Chinese are still missing. Nearly 45,000 people have been evacuated. This latest flood in China has confirmed 127 more dead to an already 1,100 people this year killed by the floods. The damage across 28 provinces and regions will cost an estimated tens of billions of dollars to repair.

Nearly four million Pakistanis faced food shortages and starvation from the destruction of their 1.4 million acres of crops in the breadbasket of Pakistan due to their country’s worst-ever flooding in their recorded history. The swollen Indus River’s overflow submerged the Mor Khan Jatoi village with chest-high water and destroyed many of its 1,500 mud homes. Resulting landslides buried two villages in the northern Gilgit-Baltistan.

In Pakistan, more than 1,500 people have been reported killed and millions more left begging for rescue aid as they face down starvation.

High waters have destroyed thousands of homes and damaged crops, submerging 36,700 acres of farmland. An estimated 5,500 homes were destroyed after the recent heavy rains.

While the nations to the south report terrible flooding, Russia to the north faces a trial by fire. “Moscow deaths double amid smog to 700 people a day,” reports the Associated Press in their Monday, August 9 article by Vladimir Isachenkov. Western Russia has been burning as a sweltering heat wave — the most intense heat wave in 130 years of record keeping and 1,000 years of historical documentation — has ignited 550 separate wildfires.

Nearly 10,000 firefighters are battling the blazes with little success in putting them out. Heat and fire have annihilated 20 percent of Russia’s wheat crop.

The Russian capital of Moscow is engulfed by poisonous smog from 40 local wildfires. For six straight days an acrid smog has blanketed Moscow, leaving residents choking on high concentrations of carbon monoxide and other poisonous substances. 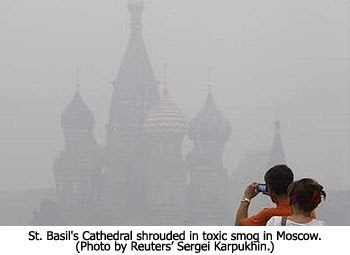 Moscow’s health chief Andrei Seltsovky claims the city morgues are nearly overflowing with 1,300 bodies, close to their capacity. The people must make a difficult choice to either breath the noxious fumes or close their windows and swelter to death. The wildfires have directly caused the demise of at least 52 people and destroyed nearly 2,000 homes.

God also uses them as remedial judgments to call nations to repentance. God isn’t blind to the massacre of Christians in China where members of the underground church are routinely rounded up and sent to detention camps, to Pakistan where Christians are falsely charged of blasphemy to Allah and brutally executed daily, to India which burns Christian orphanages to the ground, to North Korea which enslaves their population to poverty at the whims of a madman, and to Russia who arms Iran in its ambitions to destroy Israel. 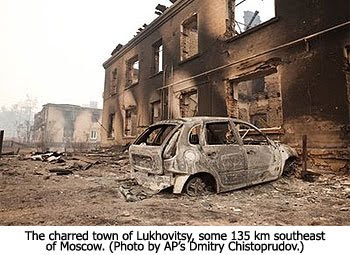 Because of our rejection of God and His moral standards, we tragically are the ones truly responsible for these natural disasters. As long as the nations continue to reject God and persecute believers in Christ, He will use natural disasters to yell — “I love you! Repent and come back to me!”

Our God is so merciful. He is patiently sending us one natural disaster wake-up call after another because He never pours out His wrath without warning. And the greatest “coming wrath” already visible on the far horizon is the 7-year Tribulation (1 Thes. 1:10), which will include so much natural devastation that the oceans and lakes will run red, the atmosphere will be polluted most likely by radiation, and a third of the grasses and trees will be decimated.

And so, we each individually need to repent for our own rebellion and selfishness. Across the globe we need to repent for removing God from our societies, for our murders from the womb to the elderly, for our obsession with sexual promiscuity, for our preoccupation with self, and for our lack of support for Israel’s right to exist. We need to accept Jesus as our Savior, the only way we will be rescued from the “coming wrath.”

Note: If you would like to join Lamb & Lion Ministries in contributing to the relief efforts in Pakistan, we are raising funds for food and aid which will be distributed by Pastor Nazir Gill of Christian Life Ministries. Please donate to the Pakistan Relief Fund today! Also, continue in prayer that the relief efforts will greatly spread the hope of Jesus Christ to those areas in Pakistan where the Gospel has yet to be shared.