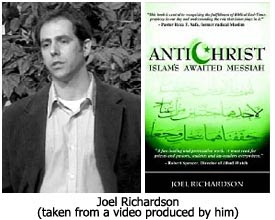 While I was working on this, Joel Richardson came out with a new explanation of Daniel 9:26, undoubtedly in response to the withering criticism that his previous explanation had received.49

He begins his new interpretation by pointing out that the destruction of Jerusalem by Titus in 70 AD did not fall within the first 483 years of Daniel’s 490 year prophecy. Rather, it occurred 40 years after the close of that period. Thus, he surmises that the prophecy concerning the Temple’s destruction most likely points to the last seven years of Daniel’s prophecy — the period of the Tribulation when he believes the Temple will be destroyed by the Mahdi.

He admits that the Scriptures do not specifically state that the Temple will be destroyed during the Tribulation, but he says the destruction is implied in Revelation 11:1-2 where it states that the Gentiles “will trample on the holy city for 42 months.” He also points to Luke 21:20 where it is stated that Jerusalem will experience “desolation,” but that verse clearly applies to the destruction of the Temple in 70 AD.50

So Richardson has gone from completely ignoring Daniel 9:26 to arguing that it was not the Romans who destroyed the Temple in 70 AD to now stating that the prophecy probably relates to a future destruction that is yet to occur during the Tribulation.

I think what we have here is a perfect illustration of a desperate attempt to manipulate both Bible prophecy and Islamic prophecy to conform to a pre-conceived end time scenario.

Even a cursory look at Daniel 9:26 reveals that the destruction of the Temple that it prophesies, occurs after the Messiah has been “cut off,” that is, after the end of the first 483 years and before the beginning of the final Tribulation period of seven years.

Another recent article by Richardson gloats over internal problems being experienced by the European Union. It was titled “EU Collapse: Doom for popular Bible prophesies?”51 Richardson observed: “Many staunch adherents to the Euro-centered end-time theory are slowly awakening to the possibility that soon there may not even be a European Union at all.” He goes so far as to compare the prediction of an end-time revival of the Roman Empire to the Watchtower’s proclamation that Jesus would return in 1975! I found this comparison to be downright ludicrous considering the fact that Jesus did not return in 1975 but the Roman Empire has been revived, as predicted, in the form of the European Union.

Further, I found this attack to be amusing, because I consider the internal problems of the European Union to be a fulfillment of Bible prophecy. After all, what was the symbol of the revived Roman Empire in Nebuchadnezzar’s dream? It was the feet mixed of iron and clay. Such a mixture is inherently unstable, and I have always interpreted it to mean that the revived Roman Empire of the end times would be a loose confederation of states before being galvanized into a powerful empire by the Antichrist.

Rather than a great Muslim triumph under the leadership of a Muslim Antichrist, I believe the most likely end-time scenario for the Muslim world will be one of overwhelming defeat, first in the regional wars of Psalm 83 and Ezekiel 38 and then in the world wars of Revelation 6, 8 and 9. Muslim power in the Middle East will be dealt a terrible blow in the wars of Psalm 83 and Ezekiel 38, both of which I think will most likely occur before the beginning of the Tribulation.

But the biggest portion of the Muslim world lives outside the Middle East. The largest Muslim nations today are Indonesia, Pakistan, India, and Bangladesh. It is these nations that I believe will offer the strongest resistance to the European Antichrist, and I believe they will be destroyed in the world war the Antichrist will launch, a war that begins as a conventional one in Revelation 6 but which appears to eventually morph into a nuclear one in Revelation 8 and 9, resulting in the destruction of one half’s the earth’s population.

Second, I think the current rush to identify the Antichrist as a Muslim is a classic example of newspaper exegesis — of reading the news headlines into the Bible rather than letting the Bible speak for itself. It would be good to keep in mind a comment made by the great Bible teacher Ray Stedman: “What determines the future is what God has done in the past and what He has promised to do in the future. So don’t look horizontally at current events.”52