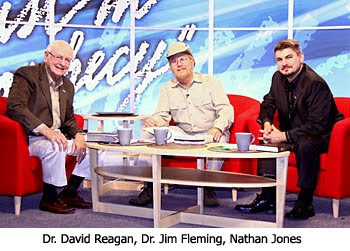 Why do archaeologists seem to hold the Bible in contempt as a reliable, historical document?

Dr. Fleming: There was a period in the mid 1900’s when many people wanted to show that the Bible could be proved to be authentic by archaeology. The agenda was to try to discover some things specifically proving the Bible. Archaeologists are trained at secular universities. You want to convince your scientific colleagues that you are objective and not forcing an agenda. This objectivity made them swing to the other side of trying, to almost being afraid to make a biblical connection.

Dr. Reagan: What gets me about that is if an archaeologist finds a piece of papyrus in Egypt with some writing on it, they immediately assume that that it is true and authentic. And yet, not the Bible — one of the best preserved documents of antiquities. In fact, the other morning my wife and I were having a devotional. We starting reading 1 Chronicles. The first six chapters are the most detailed chronologies. This is not a fairy tale. These are detailed chronologies.

Dr. Fleming: Sure. What you should say if you are being truly objective is that the Bible should at least be considered as an equal source among other ancient sources. Now, for someone of faith, we would have a special trust in its authority. But, academically, the Bible should at least be taken as a source like any other source and not be punished because it was preserved. It was lost and then found, so okay, it is valuable source. For example, the Dead Sea Scrolls have showed us how accurately the Bible has been preserved over the centuries and therefore has not been demeaned in any way.

Nathan Jones: How do you then as a biblical archaeologist view the historicity of the Bible?

Dr. Fleming: As you know, some places in the Bible are meant to be symbolic and they will tell you so, such as “let me tell you a parable about a vineyard on a fertile hill,” or Jesus saying “a man went from Jerusalem to Jericho.” Symbolism would not ask, “What was the man’s name?,” or “What time of year did he travel?” But, in that case Jesus used a specific road as an illustration for a parable. Or, take Isaiah 5, where there was a vineyard in Judah. You wouldn’t ask, “How are vines in Judah grown?” Even if you feel some portion of the Bible might be a parable expressing a truth for all times and all places, it doesn’t mean the historical and geographical references are not important.

I once had three professors I was asked to take around Hebrew University and Jerusalem because they were happen to have been from Germany and were looking to have their university bring students to study at Hebrew University. There was such resistance by them to think it important to visit any place in the Bible, because in their mind many portions of the Bible were not historical. But, I convinced them that if they were going to truly be objective, they had to at least first consider, “Could this be a historical memory?” Our conclusions after that preliminary consideration to be open to the possibility might become different, but at least one has to be open to that possibility.

Dr. Reagan: Well, yes, and quite frankly I get amused when I read these secular archaeologist, because it seems that quite often their purpose is to prove that the Bible is wrong. It seems every time they turn over a spade of dirt they find something that justifies the historicity of the Bible.

Nathan Jones: They always take the late or the earlier dates than what are traditionally held, too, it seems.

Dr. Fleming: Well, part of that is that they have to write a theory that no one else has written so that their name is known and everyone will use their dates. Ego enters in there some.

It is important to at least be open to the possibility that this biblical reference might be a very accurate remembrance about a time and place, and so we should go and study that time and place and be open to that possibility. For example, there are 27 cities in the Gospels fully named. Insight comes into the story when you know where events happened. There are 353 towns in Israel mentioned in the Old Testament. Only a crazy archaeologist would count them, right? But, I have a hunch that meaning comes if you know about the place, otherwise the text would just say, “They went to another town.”

Dr. Reagan: How many towns are listed in the New Testament?

Dr. Reagan: How many are mentioned by Josephus?

Dr. Reagan: Okay, the reason I am asking this is because you’ve got all these lists and not one single list mentions Nazareth.

Dr. Reagan: So, Nazareth had to be a little podunk town?

Dr. Fleming: Yes, and that is expressed where the excavation was found. Nazareth in Jesus’ time was 200 to 300 people and unwalled.

Nathan Jones: Nazareth now seems like the marriage capital of the world, as every other store there is a bridal shop!

Dr. Fleming: Canaan on the other hand had 5,000 people, so said sophisticated city slicker Nathaniel from Canaan. Remember where it says, “Can anything good come out of Nazareth?” Nazareth is a “you’ve got to be kidding me” place. Pilate would have been writing that sign to put over Jesus asking, “Jesus of Nazareth, how do you spell that, N-a-z…” The most important thing to remember about Nazareth is that Nazareth was not important. Because of that fact, we can understand what a mystery of our faith it is that a man from such a small village without sophisticated things in their town, say without a university, now has 3,000 graduate schools around the world today still discussing his sayings. It is one of the mysteries of our faith.

Dr. Reagan: It is one of the evidences to me that Jesus must truly have been God in the flesh.