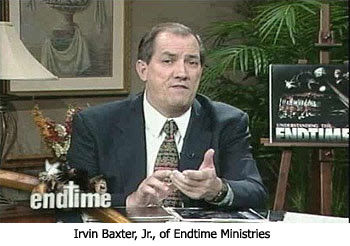 How do the prophetic teachings of Irvin Baxter, Jr., line up with the Bible?

I have lately started receiving many inquiries concerning the prophecy ministry of Irvin Baxter, Jr., of Endtime Ministries. His ministry Web address is www.endtime.com.

Awhile back when I had originally begun to surf his website, several red flags started popping up. First, I could not find a statement of faith. I looked for a good ten minutes and was about to give up my search, when I stumbled across a statement of faith in a very peculiar location. It was on the page where you enter your name and address to subscribe to his prophecy magazine. It is now located under “About Us.”

The statement provoked continuing concern. It was vague and general in nature, consisting of only three sentences. When I run across such statements, they always prompt me to wonder if the person is hiding something. It has been expanded a little bit since.

That question may have been answered by the next red flag I encountered. It was on the ministry’s links page, the page where links are supplied to other websites. Only eight links to “religious sites” were supplied, and three of those were links to sites affiliated with the United Pentecostal Church, a group that denies the foundational Christian doctrine of the Trinity.

The third red flag I encountered was also on the links page. I noticed that there was not a single link to another prophecy ministry. (We have over 25 links to other prophetic ministries on our web site and many links to Messianic ministries, many of which are prophetic in nature.) This glaring omission caused me to assume that Mr. Baxter must have some off-the-wall prophetic interpretation that no one else agrees with. That assumption was to prove true.

The meat of the website is to be found on the “Frequently Asked Questions” page, now titled “Urgent Questions.” It doesn’t take long to discover that Mr. Baxter is a person with a very personal and unique interpretation of Bible prophecy, something we are warned against in the Scriptures (2 Peter 1:20).

It would take more space than I have available to summarize and counter all of Mr. Baxter’s unusual interpretations of prophecy, so I will mention only a few.

The normal, plain sense interpretation of Revelation 6 is that it marks the beginning of the Tribulation with the Antichrist going forth on a white horse to conquer the world. A world war ensues, and one-fourth of the world’s population dies from war (the red horse), famine (the black horse), pestilence and wild beasts.

Mr. Baxter argues that the fulfillment of the Seal Judgments has nothing to do with the Tribulation. He asserts that the fulfillment of these judgments began in 325 AD when the Emperor Constantine presided over a Church Council that produced the Nicene Creed (a creed, interestingly enough, that laid the foundation for the doctrine of the Trinity). In short, he identifies the white horse of Revelation 6 as Roman Catholicism, the black horse as Capitalism, and the red horse as Communism. This all makes for very interesting reading, but it simply is not sustained by the text, for it violates the plain sense meaning.

Another example of Baxter’s off-the-wall style of interpretation is found in his assertion that the world empires revealed to Daniel in Daniel 2 include the Holy Roman Empire. He sees the succession as Babylon, Medo-Persia, Greece, the Roman Empire, and the Holy Roman Empire. That is not the succession portrayed in Daniel 2. The Roman Empire is followed by an empire of iron mixed with clay — representing the unstable, final world empire of the Antichrist. The proof that this is the last empire of history is found in the fact that this is the empire that is suddenly destroyed by a stone that represents the kingdom of Jesus Christ when He returns.

Mr. Baxter does further damage to the book of Daniel when he contends that the symbols used in chapter 7 refer to Great Britain, Russian, and Germany. Again, this runs contrary to the plain sense meaning of the passage. In Daniel 7, God gives Daniel a vision of the same succession of empires as he was given in chapter 2. The difference is that in chapter 2 they are seen from the viewpoint of Man — as glorious political kingdoms — whereas in chapter 7 they are presented from the viewpoint of God — as ravenous wild beasts.

One of the strangest statements on Mr. Baxter’s website concerns the Rapture. In response to a question about the timing of the Rapture, he says, “Unfortunately, rapture timing debates between brothers in Christ often become divisive, and for this reason, Entime has chosen to avoid the issue for now.” I was astonished by this non-answer. Here is a person with an opinion on everything in the prophetic scriptures, yet he chooses to “avoid” one of the most important issues! It didn’t make any sense to me.

I was even more astonished when I continued reading, for in the very next paragraph, Mr. Baxter states that he believes that the Rapture and the Second Coming are “the same event.” Well, if they are the same event, then the Rapture must take place at the end of the Tribulation — so much for “avoiding” the issue.

To sustain this position, Mr. Baxter proceeds to try to explain away some passages that imply a pre-Tribulation Rapture. In doing so, he presents the most peculiar and bizarre interpretation of 2 Thessalonians 2 that I have ever run across. The passage states that the Antichrist cannot be revealed until that which restrains him is removed. I believe this is talking about the Church since the Church is the entity that the Holy Spirit works through to restrain evil in the world. Mr. Baxter contends that the restrainer is “time.” Yes, time! It’s just not the right time for the Antichrist to be revealed, he says, and when the time is right, the revelation will occur. Well, I would agree with that, but the statement fails to deal with the question of what is going to be removed? How do you remove time?

Mr. Baxter’ approach to prophetic interpretation makes it clear why the plain sense meaning rule is so important. That rule states: “If the plain sense makes sense, don’t look for any other sense, or you will end up with nonsense.” As with Mr. Baxter, you will end up with a very personal interpretation that no other prophecy teacher is willing to endorse.

I urge caution with regard to Mr. Baxter and his unique interpretations. Remember 2 Peter 1:20 — “No prophecy of Scripture is a matter of one’s own interpretation.” Frank Stagg in his book, How to Understand the Bible, says, “God does not grant private disclosures that are withheld from other people.”

First Corinthians 14:29 says that when a prophet speaks, his words are to be evaluated by others, for “the spirits of prophets are subject to prophets” (1 Corinthians 14:32). This essay has been written in the spirit of that admonition. I am thankful that Mr. Baxter is emphasizing the Lord’s soon return, but at the same time I urge great caution regarding his very personal interpretations of Bible prophecy.