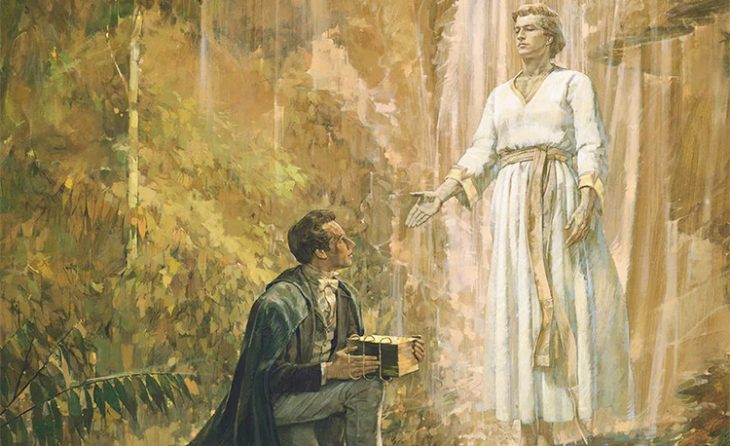 What is the goal of a Christian cult? Cults expert James Bjornstad identified the goal as: “The goal of religious counterfeits is deception, presenting a likeness to the original while at the same time maintaining differences.”1 He added that these religious counterfeiters claim to be genuine Christians while at the same time repurposing yet redefining biblical doctrines involving God, Jesus, and salvation. In doing so, they take “great pains to mimic every detail in copying… doing everything possible to reduce the chances of detection and increase the chances of acceptance.”2

One of the most notorious and successful of these religious counterfeiters was Joseph Smith Jr. (1805-1844), founder of the Church of Jesus Christ of Latter-Day Saints (LDS), better known as the Mormons. With nearly eight million followers today, the LDS Church continues to grow at an exponential rate, even some 180 years after Smith’s death.

But, the cult of Mormonism stands precariously like a house of cards, easily collapsed by three simple arguments. These three arguments will be examined in the light of equipping Christians to help rescue the lost Mormon from their cultic beliefs and eventual eternal death in Hell.

Reason 1: The Character of Joseph Smith

The LDS Church made the following admission based on their founder’s own personal testimony of being a divinely appointed prophet of God:

By nearly three million persons in many lands, Joseph Smith is today held in remembrance as a Prophet of God. The virtues and achievements of his followers stand as a monument to his divine calling. The Church of Jesus Christ of Latter-day Saints has its foundation in the revelations he received, the sacred truths he taught, and the authority of the priesthood restored through him.3

Within this foundational LDS statement lies what cults expert Robert A. Morey calls Mormonism’s “Achilles’ heel,” stating that “the authority of the Mormon priesthood and the validity of their doctrines rest totally on Joseph Smith’s claim to be an inspired prophet of God.”4 It could then be argued that Mormonism either stands as a legitimate expression of Christianity or falls into being labeled as a cult based on Smith’s own claim of being a true prophet of God.

That means then that should Joseph Smith have ever pronounced any prophecy that turned out to be false or never having been fulfilled, he would end up violating Moses’ litmus test for determining whether a message had been truly spoken by the Lord or not. As the Scriptures reveal: “If what a prophet proclaims in the name of the LORD does not take place or come true, that is a message the LORD has not spoken. That prophet has spoken presumptuously. Do not be afraid of him” (Deuteronomy 18:21-22 NKJV).

Since the foundation of all LDS beliefs rests on the prophetic claims made by Mormonism’s founder, then Morey advises that Christians adopt the two-pronged apologetics strategy of listing Smith’s failed prophecies as well as highlighting his highly immoral character, and in doing so, will best sway those seduced by Mormonism into renouncing both Joseph Smith as a false prophet and Mormonism as a false expression of Christianity.5

In other words, remove Joseph Smith from the religious equation and what remains is a total reliance on Jesus Christ alone through faith alone. Mormonism’s own Articles of Faith admits to as much stating, “If his [Smith’s] claims to divine appointment be false, forming as they do the foundation of the Church… the superstructure cannot be stable.”6 The superstructure will now be shown to indeed be very unstable.

Cold Case Christianity author J. Warner Wallace provides just a few of the many failed prophecies made by Joseph Smith proving that he did indeed fail Moses’ test for discerning a true prophet of God.7

1. Joseph Smith made open-dated prophecies, such as when he predicted in 1835 that, “The coming of the Lord, which was nigh — even fifty-six years should wind up the scene” (History of the Church, Vol. 2, 182).

2. He made a number of self-fulfilling prophecies, such as when he claimed the Lord instructed him not to translate any more until he had arrived in Ohio. (D&C 37:1).

3. Smith made conditional prophecies, such as when he stated that if the people of Ohio repented they would not be severely judged by the Lord (D&C 40:16-18).

4. Smith even went as far as to make close-dated, unconditional prophecies, such as when in 1832 he prophesied that a LDS temple would be built in Independence, Missouri within his generation. Almost 200 years later and no Temple has ever been built, especially during Smith’s generation, forcing the LDS leadership to admit this prophecy has never come true. (D&C Section 84).

5. Smith also made a number of fanciful prophecies, such as when in 1837 he proclaimed that the Lord had told him that the moon was inhabited by men and women who looked like the people of earth and that they lived up to a 1,000 years old, stood nearly six feet tall, and dressed uniformly like Quakers.

In the second segment, we will continue to look at the first and the second of three irrefutable reasons why Joseph Smith was a fraud.

6. The Church of Jesus Christ of Latter-day Saints, “Articles of Faith,” 7-8.