The Mysterious Angel of Revelation 10

Who is the “mighty angel” of Revelation 10?

Chapter 10 of Revelation brings a halt to the chronological action in the book. This is what I call “the rhythm” of the book of Revelation. The action builds — the terror mounts — it gets worse and worse, and then, all of a sudden, it comes to a screaming halt, and a parenthetical passage is inserted to assure us that everything is going to work out all right. After all, by the time you get to the end of chapter 9 the world situation looks pretty grim. So, chapter 10 is a parenthesis that presents a flash-forward to assure the reader that everything is going to turn out okay in the end. 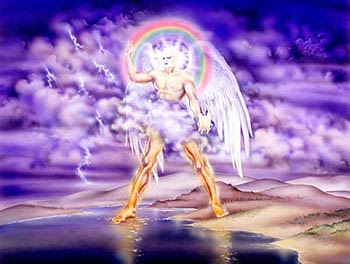 John suddenly sees a very unusual angel — a “strong angel.” The angel is clothed with a cloud, he has a rainbow upon his head, his face is like the sun, and his feet are like pillars of fire (10:1).

I don’t think there’s much doubt who this is. This mighty angel is Jesus. The point is not that Jesus is an angel, because we know from Hebrews chapter 1 and from the rest of the Bible, He is not an angel. He is God in the flesh. He is therefore greater than all the angels, and that’s the reason the angels worship Him (Hebrews 1:6). He’s existed forever, whereas the angels were created. The imagery here is based upon the Old Testament passages that present Jesus in His pre-incarnate state as “the angel of the Lord,” which is a term of endearment. (See Exodus 3:2-6.)

We know this is Jesus because He is clothed with a cloud which is a representation of the Shekinah glory of God. Further, He has a rainbow upon His head, and chapter 4 reveals that’s the symbol of faithfulness that crowns the throne of God. His face is like the sun. That’s right out of the description of Jesus in chapter 1 (verse 16), as is the reference to His feet being like pillars of fire (1:15).

The clue that clinches the angel’s identity is in verse 2 where we are told that He has a little scroll in His right hand which He holds up as He claims possession of the earth. In chapter 5 we learned that Jesus was the only one in all the universe who was qualified to take that scroll from the hand of God the Father.

What we have here is another flash-forward to the end of the Tribulation to assure us that everything is going to turn out all right. Jesus is going to return in triumph to claim the earth for the children of God.

Some object to identifying the angel as Jesus because they argue that the angel makes a vow upon the name of God (verse 6). They ask, “How can this angel be Jesus, who is God in the flesh, if he makes a vow in the name of God? Can God make an oath in His own name?” The answer is yes. In Hebrews 6:13 we are told that when God made a promise to Abraham, “He swore by Himself” because “He could swear by no one greater.” Likewise, in Jeremiah 22:5 God says to the prophet, “I swear by Myself.” (See also: Isaiah 45:23, Daniel 12:7, and Amos 4:2 and 6:8.).