What is meant by the Good Shepherd laying down his life for his sheep?

Dr. Reagan: We are now at what looks to me like a Bedouin tent, but let’s let the expert tell us what it is.

Dr. Fleming: This is goat hair of a brownish-black color. When it’s dry there’s a very large space in the weave allowing light to shine through. As soon as it gets wet, the hair swells and it becomes waterproof. It works perfectly.

When you look up towards the sun in the day through the tent it looks like you’re looking at the Milky Way. The word in the Old Testament for the night sky is the “tent of the heavens.” God has just unfurled the tent in heaven. 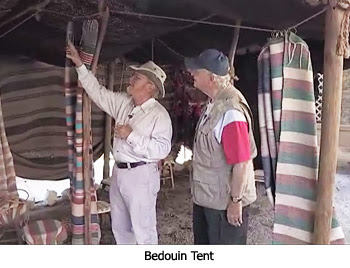 Dr. Reagan: The Bedouins still use tents like this in Israel today. You can see them on the way from Jerusalem to Jericho.

Dr. Fleming: Yes, though I’m afraid they’re a lot more plastic nowadays, but there still are some traditional tents.

There’s always in antiquity and even today among the Bedouin a divided section for a woman and children. Women would have been in one section, so Sarah would have been standing off on one side listening to Abraham talk with his angelic guests in another section where Abraham would have been receiving others.

Dr. Reagan: There is a little interesting item hanging on the tent which is fascinating. What in the world is it?

Dr. Reagan: Believe it or not, it’s a dog collar. The predators were all around, like today it is the grey wolf in the north. Back in antiquity you had lions and bears along with wolves. The dogs actually wore a spiked dog collar because its neck is the place the wolf is going to tear at on the dog. 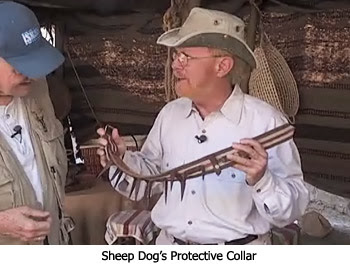 Dr. Reagan: Why didn’t the shepherds put those collars on the sheep?

Dr. Fleming: No, it was just on the guard dogs. The shepherds needed to have the guard dog for their hearing abilities as well. These dogs were huge watch dogs. Modern day shepherds even cut the dog’s ears today so that the wolves won’t have the chance to bite onto something.

The main point is this — most people don’t realize how dangerous it was to be a shepherd in biblical times. When Jesus said the shepherd lays down his life for the sheep, He meant it. I’d imagine people living near grazing areas would hear every week of a shepherd being attacked. For example, David talked about killing a lion and a bear, so such attacks were pretty common then.

In the third part of this series with archaeologist Dr. James Fleming at his Explorations in Antiquity Center, we’ll glean some biblical insights by learning what life in the First Century was like when it came to housing sheep.

Israel in the Wilderness