In this second segment of our exploration of the Exponential Curve, we’ll consider the explosion of knowledge, transportation and communications.

2) Knowledge — Another area that is increasing exponentially is knowledge. The prophet Daniel was specifically told that knowledge would vastly increase in the end times (Daniel 12:4), and it has. In fact, we have become so overwhelmed with the flood of new information that it is difficult to find wisdom anymore, because wisdom comes from reflection on knowledge. 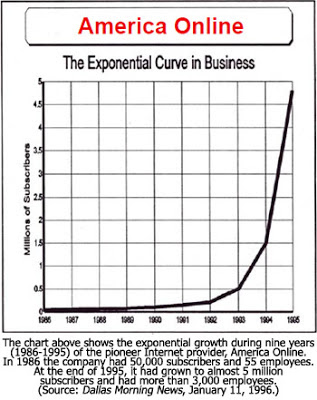 It is estimated that 80% of all scientists who have ever lived are alive today. Every minute they add 2,000 pages to man’s scientific knowledge, and the scientific material they produce every 24 hours would take one person five years to read.7 The scientific journals cannot publish all the academic articles that are being written. Many have to limit the articles to one page abstracts, and even then most articles are rejected for a lack of space.

Consider how rapidly knowledge is increasing:8

Today, knowledge is doubling every 12 months!

That means encyclopedias are out of date before they can be printed, which is the reason they are no longer printed. Britannica stopped printing in 2010 after 244 years.9

I read recently where a research organization had determined that one Sunday issue of the New York Times contains more information than the normal person in the 19th Century was exposed to in a lifetime!10

The most amazing thing to me in the area of information is the World Wide Web that can be accessed through the Internet. Using it, I can access the documents of the Vatican in seconds, and then in a matter of moments, I can go to the Israel Museum in Jerusalem, or I can dart back to the Library of Congress in Washington, D.C. In short, I can access information all over the world without ever leaving my office.

Below is a photograph of 5th Avenue in New York City in 1905. As you can see, the only means of transportation visible is the horse-drawn carriage. 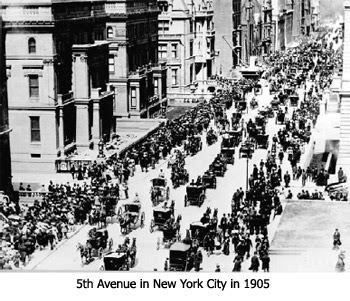 I have a similar photo that was taken in my home town of Waco, Texas in 1912. It shows the city square, and like the photo above, all that can be seen are horse-drawn wagons and carriages.

Today we have automobiles (usually two or more to a family!) and airplanes. We have bullet trains that travel 150 miles per hour and planes that travel faster than the speed of sound. And then, of course, there are rocket ships that take astronauts into orbit around the earth.

In 1866 Mark Twain traveled to the Holy Land. It took him three months to get there. Today, a group can get on a jet plane in New York and be in Tel Aviv in 13 hours (and most will complain about how long the trip took!).

4) Communications — At the beginning of the 20th Century the telegraph had sped up communications considerably, and the telephone had been invented. But the fundamental means which most people used to get information was still the newspaper.

Today our communication resources are overwhelming. We have telephones, radio and television. We have exotic devices like fax machines, pagers and cellular phones. And we can communicate worldwide through satellites.

I never cease to be amazed when I see someone use a credit card at an Arab shop in the Old City of Jerusalem. The shop may be nothing but a primitive hole in the wall, but over in some dark corner there will be a machine where the merchant can swipe the card. A few moments later he receives an authorization. During those few moments, the card number has been transmitted to Tel Aviv, from Tel Aviv to New York by satellite, from New York to the credit card processing center somewhere in the States, and then back to the Arab shop in Jerusalem!

I am equally amazed at the way I can sit down at a computer at my home or office and use the Internet to send a letter in seconds to almost any place in the world. In 1995 when I got on the Internet, there were only 16 million people using it. Three years later, in 1998, there were 150 million. Today there are 2.2 billion users worldwide!11

Once again, we have the exponential curve.

In the third segment of our exploration of the Exponential Curve, we’ll look at more examples and consider the explosive growth of computers, military power and violence.