How did economics work in First Century Israel?

Dr. Fleming: A farmer growing barley and wheat would spend four months of the year in an agriculture installation known as the threshing floor. In March and April it is the barley harvest. Farmers would bring in the handfuls of the sheaves of grain and put it in the threshing floor.

The threshing floor is always a place where bedrock is exposed instead of a soft ground. You’d also have a threshing sled with sharp rocks in it that is turned with the rocks facing down. A trained mule or donkey or the farmer standing and guiding them makes circles. The sharp rocks scrapping the bottom cuts the pieces of the stalks into smaller and smaller pieces.

The farmers would then us winnowing forks. They’d wait until a windy afternoon and throw the cut pieces up into the air. The lighter elements would be blown aside and the grain falls back down. 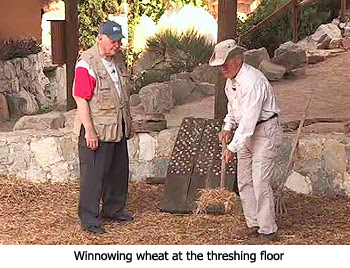 Usually though there’s still some pieces of stalk left in with the grain, so then they’d have to sieve it a little bit more usually using pieces of cloth or whatever to sieve it. Finally, they’d bag up the grain. And, that’d be their harvest.

The threshing floor is important for the farmer in knowing what their economy was going to be like. Did they get four bags threshed or 40 bags?

Interestingly, in reference to Canaanites in the Bible, at a place called Ras Shamra was found an altar built to Ba’al at a threshing floor. Remember Ba’al is the rain god and so the god of the economy. He’s the “GNP god,” and so at the pagan threshing floor is where they’d be thanking Ba’al for the harvest.

David went up and bought a threshing floor not because it was a vacant lot, but probably because Ba’al was being worshipped there and David is changing the religious status of Jerusalem’s threshing floor. Of great significance, the threshing floor David bought was on Mt. Moriah in Jerusalem where eventually Solomon built the Temple. The Temple that Jesus saw was the Second or Herod’s Temple built on the very same spot.

Dr. Fleming: The market street was a vending area.

At our Center you would see where we have a place where you could weigh out buying some nuts. Let’s just say you wanted three ounces. I’d put my three ounce weight on one side of a hanging scale. The merchant would then be adding nuts on the other side of the scale until both sides are level.

There is a phrase “Kitsat hessed, be-vakasha” which means “a little grace please.” If the vendor wants you to come back they put another handful onto your side of the scale. Now listen, that is the same phrase for, “I am a God full of hessed, full of grace.” The Bible speaks about God who is so gracious that He puts a little bit more on our side of the weight.

It’s a wonderful thing to watch the kids be able to act out this biblical truth on the scales.

Vendors never did what some did in the early years of the United States by putting their thumb on the weight side of the scale. In fact, because people are worried about unscrupulous vendors, they also had their own bureau of weights and standards. If there is somebody who might be having two sets of weights like remember Deuteronomy talking about that, there is a way to be certain the weights are tested. 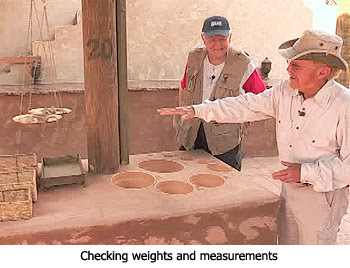 The example at the Center has both dry volume weights and liquid volume containers. There would be different containers for different volumes. If you had a quart of milk and you were suspicious that it wasn’t accurately sized, you could come to the guy in charge of the weights and measures and pour your milk into his little quart measuring container. You’d pour it in there and it would drain out and you’d see if it did fill up a quart. If there was a discrepancy, then the man in charge of the weights and measures would fine the vendor.

The man in charge of checking weights and measurements is mentioned in the Gospels. At Capernaum there has been found an usually translated word “royal steward” or “royal official.” The word is agironomous or basilikos, for the agora or market and the basilica.