Reasons Behind the School Shootings (Part 2 of 2) 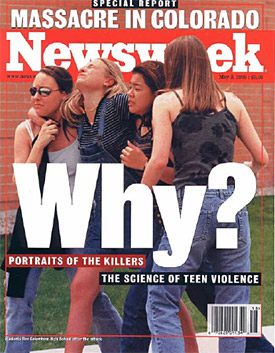 In the first half of my observations concerning the reasons behind the epidemic of school shootings, I addressed the changes the courts have made to the First Amendment of the Constitution, as well as introduction of Evolution in the school systems. We’ll now look at three more reasons.

The Transformation of the Entertainment Industry

The third thing I would point to that has changed since my public school days is the nature of American entertainment.

In 1939, The epic movie, Gone With The Wind, ran into trouble with the censors because it ended with Clark Gable saying, “Frankly, my dear, I don’t give a damn.” One month before the film’s scheduled release, the Motion Picture Association had to amend the code it had adopted in 1930 to allow the use of the word, damn.5

The Motion Picture Code lasted until the cultural revolution of the 1960’s. First it was radically amended to give producers much more freedom, and then it was replaced by the film rating system which basically allows a film to contain anything, as long as it is rated properly.6 This change opened the flood gates of filth, and we began to export the filth all over the world, becoming the moral polluter of planet earth.

Likewise, when television began to spread nationwide in the 1950’s (I saw my first TV set in 1952) there were strict codes of conduct for the producers of television programs. Over the years since that time, those codes have eroded to the point that almost anything is allowed on TV today.

The contrast is stunning. When I was growing up, we watched wholesome programs like “The Life of Riley,” “I Love Lucy,” and “Father Knows Best.” All these programs taught basic Judeo-Christian moral values.

Today the channels are flooded with morally depraved reality shows like “The Bachelorette,” with sex-laden situation comedies like “Two and a Half Men,” with demented dramatic series like “Revenge,” with brutally lurid shows like “Criminal Minds,” and with programs that are constantly pushing the homosexual agenda.

Perhaps the best way to illustrate the stark contrast between the early years of TV and today is to compare two programs about families, the Nelson Family (Ozzie & Harriet) which blessed American TV from 1952 to 1966 and the Osbourne Family (Ozzy & Sharon) which polluted the airways from 2002 to 2005. One featured a family (the Nelsons) who were loving and supportive of each other. The other (the Osbournes) focused on a totally dysfunctional family led by a man-child who lived in a drug haze while the rest of the members of the family were at each other’s throats, constantly fighting and cursing. The Nelson family showcased moral values. The Osbournes never heard of morality.

And then there is the music industry with its hard rock beats designed to appeal to the flesh and rap music that glorifies crime.

A fourth major change in my lifetime has been the revolution in society that the computer has produced.

The first desktop computers hit the market in the late 1970’s. At first they were used primarily for tasks like word processing and accounting. But by the mid-1980’s most of the software being sold consisted of computer games which rapidly began to focus on violence and the occult.

Also, in the mid-1990’s the Internet was made accessible for public use, making pornography easily available to people of all ages in the privacy of their homes.

My wife was a first grade teacher for 30 years. I vividly remember her coming home one day very agitated. When I asked what was wrong, she explained that she and her class had been exposed to pornography during their computer lab time! She said each child had selected an animal to write an essay about. When the children got seated at their computers, she asked them to type the name of their animal into a search engine. One boy had selected the cheetah as his animal. When he typed that word in, the first thing that popped up was a photo of a nude dancer whose stage name was Cheetah. It was just that easy for a 6 year old boy to be introduced to the lurid world of porn.

The Evolution of the Church

The last change factor that I think has been crucial relates to the Church.

When I was a kid, the Church was a central part of my life and the lives of the kids I played with. My family went to church on Sunday morning, Sunday evening, Wednesday evening, and to several Gospel meetings each year. Additionally, I attended Sunday School and Vacation Bible School. I was taught to revere God, His Word, and His moral code.

Sundays and Wednesday evenings were sacred. No school events or sporting events were ever scheduled on these days. And on Sunday, all the commercial enterprises were closed. It was truly a day of rest — time to spend with the family.

Today, Sunday and Wednesday are just like any other day of the week. They are filled with diversions, and one of the consequences is that it is hard to find a church that meets more than once a week on Sunday morning. And many, if not most, churches have adopted the seeker-friendly mentality that sugarcoats the Gospel and seeks primarily to entertain. Youth programs focus on pizza parties rather than Bible study. It is no wonder that 70% of kids from Christian families end up revoking their faith and embracing the world.

How can we expect any child to learn morality one hour a week in Sunday School when they are assaulted the rest of the week with the pagan values of our schools, movies and television programs? It is completely understandable that we have an entire generation growing up among us who believe that life is all about sex, violence and money.

And if every problem in TV programs, movies and computer games is solved with violence, why should we be surprised when our children resort to violence to solve their problems?

The Bible says that in the end times, society will become as violent and immoral as it was in the days of Noah (Matthew 24:37).

Let’s end with the question we began with: “Why is there so much violence in our schools and society?” The answer is that we have put guns in the hands of moral pygmies.

5) Wikipedia, “Frankly, my dear, I don’t give a damn,” http://en.wikipedia.org/wiki/Frankly_my_dear_I_don’t_give_a_damn.

6) Tom Herd, “Indecency and the FCC: A Short History,” http://civilliberty.about.com/od/freespeech/tp/FCC-Indecency-Timeline.htm.