The Gate to Prophecy: A Unique Discovery 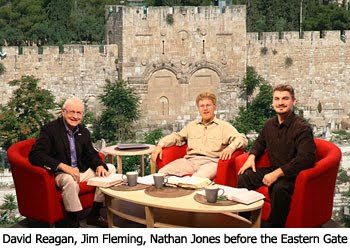 A couple of years ago I had the privilege of interviewing Biblical Archaeologist Jim Fleming on Christ in Prophecy. I asked him about his amazing discovery of the ancient Eastern Gate, and here’s how he described it.

Dr. Fleming: I can’t take any credit for it. I would like to be able to say that after years of study and research I finally found it. Instead, it was a heavy night of rain in the spring.

Dr. Fleming: It is. I was a student at the Masters level in Archaeology. I thought I’d take some pictures of Jerusalem’s city gates. As I was walking through the Muslim cemetery on the east side of the city, I got close enough to look up. I was taking a picture of the arch and hadn’t realize the rain the night before had loosened the stones at the top of a tomb. Limestone absorbs water, and it was subjected to a pretty heavy rain. Just as I went “click,” the tomb collapsed. So, the actual phrase need to be “stumbled upon” discovering the Eastern Gate.

Nathan Jones: You just fell into a tomb?!

Dr. Fleming: Yes, and those that know me well think I had landed on my head! Fortunately enough, though, stones fell in with me that I could stack them up, climb on, jump up, and chin myself and get out, because otherwise there was nowhere I was going.

Dr. Reagan: How far down did you fall?

Dr. Fleming: It was an 8 foot drop. The location was actually was a mass burial grave. There were 46 skeletons. Actually, I didn’t count them right away, that was after I found out there was enough stones to get out. Otherwise, there would have been 47 skeletons!

Nathan Jones: There were bones all around you when you were down there?

Dr. Fleming: Probably they were all there due to there having been some disease. I would guess since there was still some cloth and some cartilage that they were buried there about 100 years previously. There were no records for that particular grave.

Dr. Reagan: Did you realize immediately the opportunity you had?

Dr. Fleming: Well, as my eyes got used to the dark, I could see beyond the skeletons the back wall of the tomb and realized it was the earlier wall. It was part of the same line which continued eight feet below ground. What was amazing was the completely preserved stones set in nice wedge shape at the top of an earlier gate, meaning that the original gate is fully preserved.

Dr. Reagan: Do you have any evidence of this? Did you photograph it for example?

Dr. Fleming: Fortunately, I got a picture or two that came out. Uncharacteristic of Middle East efficiency, when I brought my archaeology teacher back the next day after class, they had already cemented over the tomb. It’s because it is a Muslim cemetery, which is a sensitive place. I was glad the picture came out.

My archaeology teacher, Dr. Kohavi, didn’t seem that impressed. I think he thought I had landed on my head. Back in those days your photos ended up as slides and it took a while to get the picture developed and back. Until he saw the picture he doubted, but then with the picture he realized that yes I had found the original Eastern Gate. 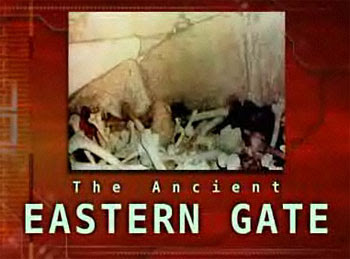 Dr. Reagan: I guess it really isn’t too surprising to find the ancient gate directly below the current one, because in most of the excavations in Israel don’t they find that they built the gates right on top of each other?

Dr. Reagan: Yes. There is a reason for putting a gate where you put a gate?

Dr. Fleming: Yes, there’s usually a road to an important site, say like the Jaffa Gate or Damascus Gate. And so, builders tended to use the relative same part of the wall. What’s remarkable is that the old Eastern Gate is exactly under the newer one, and that the earlier gate is so well preserved.

Dr. Reagan: How do you end up building gates on top of a gate? Are you talking about debris piling up, or something else?

Dr. Fleming: Yes, cities tend to have dumps outside the gates. Outside the city walls garbage builds up, and so cities need to raise the roads. The closest we get to that in the US is a new layer of asphalt being added say in front of a house. In ancient times, roads and gates kept getting higher because the city is getting higher.

Dr. Reagan: This was particularly true of the Temple Mount, because for example when the Romans destroyed it and well even like when the Babylonians did, they pushed debris off the Temple Mount and all that debris built up and built up, didn’t it?

Dr. Fleming: Picture the Temple on the east side of the city, and when the Romans cleared it after 70 AD destruction to build a temple to Jupiter. They couldn’t dump debris north, west, or south because that was still city. But, the east was a steep slope in the Kidron Valley, so the eastern side of the city became the town dump.

Dr. Reagan: Isn’t archaeology fascinating? I love the way it consistently affirms the historical accounts contained in the Bible.

In the fifth and final segment of our study of the Gate to Prophecy, we’ll look at a biblical altar and its relation to the Eastern Gate.