How does the story of Elijah demonstrate that faith and bravery go hand-in-hand?

We are going to study the life of the prophet Elijah who is one of the most interesting persons in the Bible. He was a bold and fearless prophet who never died and whose ministry is yet to be finished in the future. For a fascinating glimpse of this man’s life and message, we’ll begin our study into the faith of the Prophet Elijah by looking at the spectacular city of Haifa in the nation of Israel. The city is not mentioned in the Bible because it did not exist in Bible times, but Mount Carmel which the city rests on is.

Haifa is located on the Mediterranean Sea coast about 65 miles north of Tel Aviv. With a population of almost 300,000, Haifa is the third largest city in the country, after Jerusalem and Tel Aviv. It is located at the north end of the Mount Carmel mountain range that runs for almost 30 miles southeast of Haifa, separating the coastal plain of Sharon from the Valley of Jezreel, or as it is known to Christians — the Valley of Armageddon.

Haifa is Israel’s major industrial center. It is the location of one of the nation’s two oil refineries, and it is the home of many high-tech companies like Intel, IBM, Microsoft and Motorola. It is also one of Israel’s two modern ports, the other being Ashdod to the south of here. The gold domed building located on the side of Mount Carmel is the tomb of the founder of the Baha’i faith, an eclectic religion that was founded in Iran. Its headquarters were moved to Haifa in the 20th century due to persecution in Iran. 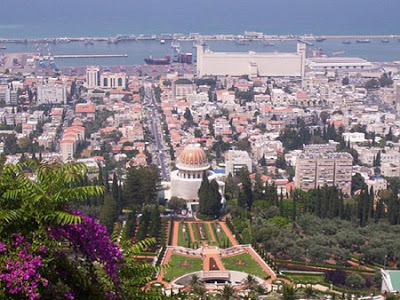 The reason I mention Haifa is that it is the area where the prophet Elijah carried on his ministry. In fact, almost directly at the base of the mountain is an ancient cave that is considered to be the place where Elijah lived and taught.

Living in a Dark Time

Elijah, whose name means, “My God is Jehovah,” appears suddenly in the Scriptures in 1 Kings 17. All that is said about him is that he was a “Tishbite from the land of Gilead.” Now the term “Tishbite” is believed to refer to his hometown, probably named Tishbe. Its location is unknown. Gilead is an area to the east across the Jordan River in the modern day nation of Jordan. In biblical times, it was part of the land that was allotted to the tribe of Manasseh. Elijah came to this area for the purpose of confronting his king, who was a very evil man by the name of Ahab.

Keep in mind that when Solomon died, his kingdom was divided into two parts — the Southern Kingdom of Judah and the Northern Kingdom of Israel. The Northern Kingdom was the rebellious one. When Elijah appeared on the scene, that kingdom had existed 60 years and had experienced seven kings, and all of them had been evil in the eyes of God. The most evil was Ahab. He had married a Canaanite woman named Jezebel, and she had led the king and his people into the worship of false gods like Baal and Asherah.

Baal was the god of rain and agriculture, Asherah was a fertility goddess who was considered to be the mother of Baal. Jezebel, who is one of the most evil women portrayed in the Bible, pushed these gods on Ahab to the point that she talked him into exiling the Levitical priests and killing the prophets of Jehovah. In short, Jezebel was determined to extinguish the worship of Jehovah by the ten Jewish tribes of the Northern Kingdom of Israel.

To say the least, it was a dark, dark time in the history of that kingdom. The people were wallowing in idolatry and the prophets and priests of the true God, Jehovah, had either been killed or they were in hiding. It took a lot of courage for Elijah to suddenly appear as a prophet of God and confront King Ahab with his wickedness. But, that’s exactly what Elijah did.

Elijah told Ahab he was going to show him who was the true God of Israel. He said he was going to call for a drought, and that it would not rain for over three years. In fact, he said it would not rain again until he called for it to do so. And, the drought began immediately. This was, of course, a direct challenge to Baal because he was considered to be the god of rain.

Three years later, Elijah confronted Ahab again, and Ahab called him, “the troubler of Israel.” Elijah’s response was again a very bold one. He said, “I have not troubled Israel, but you and your father’s house have, because you have forsaken the commandments of the Lord, and have followed the Baals.”

Elijah then challenged the king to a test of their gods, and Ahab accepted the challenge. He sent 450 prophets of Baal and 400 prophets of Asherah to confront Elijah at a place on the top of Mount Carmel. Mount Carmel at a site about 15 miles southeast of Haifa. It is a place that is called in Arabic, El Muhraka, which means “the place of burning.” It is the traditional site where Elijah had his confrontation with the prophets of Baal and Asherah.

Now, before we discuss Elijah’s contest with the prophets of Baal, let’s pause to discuss the Carmelite monastery that is located at the top of Mount Carmel. I want to tell you something, it provides a scenic view that is absolutely breathtaking. From the rooftop you can get one of the best views in all the land of the Valley of Jezreel, or as it is called in the book of Revelation, the Valley of Armageddon. When Napoleon saw this valley in 1799, he declared in amazement that, “all the armies of the world could maneuver their forces on this vast plain.” He proceeded to defeat the Ottoman armies in a battle here. 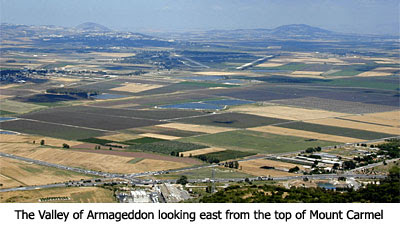 The valley stretches for 30 miles from the Haifa area southeast across the northern part of Israel to the Jordan River. In the center of the valley is a domed shaped hill called Mount Tabor. It is the traditional Catholic site of the Transfiguration. I don’t personally believe the Transfiguration took place on Mount Tabor for a number of reasons, the most important being that there was a Roman fortress located on top of the mount in the time of Jesus.

There is one event we know for sure took place on Mount Tabor, and that was a great Israelite victory over the Canaanites during the period of the Judges. You see, Mount Tabor was where the battle took place in which the army of Israel was led by Deborah and Barak.

Back on the top of Mount Carmel, by a grove of trees, there is a statue of Elijah killing the prophets of Baal, which I’ll show you in the next segment.

The the second segment on our study on the faith of the Prophet Elijah, we’ll have Evangelist Don McGee recount the story of Elijah’s confrontation with the prophets of the false gods of Jezebel.