What are the arguments that the book The Shack is not doctrinally sound?

Lamb & Lion Ministries conducts a number of Bible conferences in the Dallas, Texas area each year. Our June 2013 conference theme was Living on Borrowed Time.

One of our speakers was Dr. Ron Rhodes, the president of Reasoning from the Scriptures Ministries. He’s a prolific author of more than 60 books. He holds a doctorate in systematic theology from Dallas Theological Seminary, and he specializes in the field of Apologetics. He also serves as an adjunct professor at several seminaries. Dr. Rhodes’ topic at our conference was “The Sign of Apostasy” (watch).

Apostasy in The Shack

We also have to look at the weakened view of the Bible and the effects that has on the Bible-reading habits of some people.

The fact is, The Shack is full of problems. Sure it’s a book that is so incredibly popular and it’s inspirational when you read it, but it is wrong. We’ve got bookstores lining up to sell this book. I don’t blame them as I know it’s making them a lot of money, but just look at some of the problems. 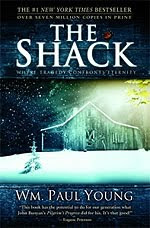 The book by the way was endorsed by Eugene Peterson who put together The Message Bible. He said that The Shack has the potential to do for our generation what John Bunyan’s Pilgrims Progress did for his. I don’t think so! I don’t think so.

The book communicates that traditional Christian teaching and Sunday prayers and hymns and a traditional approach to Christianity are all wrong. His concept of the Trinity concerning the Father is a large beaming African American woman. Jesus is a Middle Easterner dressed like a laborer, complete with a tool belt and gloves. The Holy Spirit is named Sarayu and is a small, distinctively Asian woman. That’s Tritheism, that’s not Trinitarianism. This is putting the Trinity into three people, and that’s heresy.

In the fifth and last segment of Dr. Ron Rhodes teaching on apostasy as an end times sign, he will explain what the current apostasy looks like from merging false religions into Christianity.