The Sign of the Israeli Military: Against All Odds

Does the fact that Israel’s military wins against all insurmountable odds prove that God protects Israel?

Overall, the Israeli War of Independence in 1948 resulted in an incredible, unbelievable, marvelous victory for Israel, and during the war there were many miraculous events. I want to tell you about one that you will find hard to believe. It occurred at a kibbutz called Yad Mordecai which is located 36 miles south of Tel Aviv near the northern border of the Gaza strip. The kibbutz is located on the coastal road from Egypt to Tel Aviv.

The attacking Egyptian army consisting of 5,000 troops divided as it headed north. Half of the troops headed for Jerusalem and the other half of the troops went up the coastal highway toward Tel Aviv until they reached the kibbutz of Yad Mordecai.

It’s one of the most marvelous places I’ve ever visited in Israel. There are the actual remains of that battle that can be visited.

The kibbutz had evacuated all of its children and most of its women as they prepared for the Egyptian attack. The kibbutz was left with only a handful of fighters, even some who were mere boys not more than 13 or 14 years old. The leader was an intellectual, and he was not a fighter. He was not a person who was a military person, so he didn’t really know what he was doing. There were a few big fighters I wouldn’t want to tangle with. The kibbutz was left with only 130 defenders against the massive Egyptian army. In total, there were 110 kibbutzniks and there were 20 fighters who came down to help from Tel Aviv. That’s all they could get because everyone knew this particular kibbutz was going to be slaughtered.

In preparation, the defenders dug trenches and reinforced them with sandbags. Their armament consisted of this: 37 rifles, one anti-tank gun, two light mortars, and two machine guns. That’s all they had! Here’s the frightening reality they faced as the Egyptian army with tanks approached. 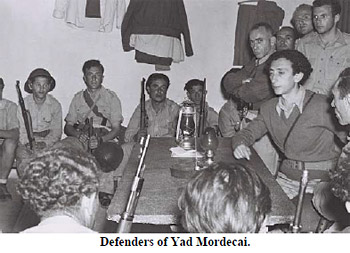 There was no hope for the kibbutz. Everyone knew that. They knew that this was a suicide mission, but they were willing to take a suicide stand.

The Egyptians attacked furiously with ground troops, tank assaults, artillery barrages and air sorties. Incredibly, the Yad Mordecai defenders held out for five days! The Egyptians were not able to overrun the kibbutz until the defenders decided to retreat under the cover of darkness because more than one-half of them had been killed and the other half had been wounded. Over 300 Egyptian soldiers died in the battle and the five days gave the defenders of Tel Aviv the time to prepare their defenses.

The kibbutz today has left the vehicles that the Egyptians could not take with them and they put up metal figures to illustrate the coming army. They’ve also put up primitive weapons in the remaining trenches used against the Egyptian army for reenactment.

While the kibbutz held off the advancing Egyptian army, four Messerschmitt airplanes had arrived from Czechoslovakia. They’d been hastily assembled so that they could be used. They were deployed on May the 29th to help stop the Egyptian army before it could reach Tel Aviv.

How in the world could 130 untrained civilians with only rudimentary armament hold off the Egyptian army for five days? No one to this day has ever been able to explain it. It had to be a miracle of God.

In the fifth and last segment of our study on the end times sign of the the resurgence of the Israeli military, we’ll marvel at the military brilliance of Operation Thunderbolt.