The Fall of Islam: Islam’s Background 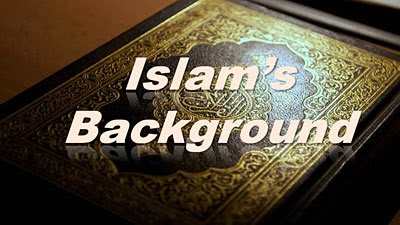 Who was the Mohammad of Islam?

Before one can understand why all the vicious attacks from Islam against the West, and Christians in particular, one must understand their beliefs. Remember, each time an Islamic terrorist attack has happened, the perpetrators have claimed that Islam was what drove them to do their killings. So, we first have to understand Islam just a little bit.

The term Islam, when I say that word, it means “submission.” Submission is what the word Islam means. And, to be a Muslim means “one who submits.” We will get into who they submit to in just a moment.

Islam was founded by a man named Mohammad. He was born in 570 AD to the powerful Arab Quraysh tribe which ruled Mecca in Arabia. He was raised by a grandfather and later an uncle after his parents died. He was a shepherd and he did camel care jobs, kind of our equivalent today of flipping burgers. You could say he was a burger flipper of his time because he took care of camels.

At 25 years old, Mohammad met a 40 year old widow named Khadji. She was very wealthy and when he married her his job problems were over. With Khadji he had six children. After Khadji died, he ended up marrying a total of 15 women, one per year. Mohammad would take them from the spoils of war, he would take first cousins, and he even took his own daughter-in-law Zaynab away from his adopted son. Then, at 54 years old, Mohammad took a little six years old girl by the name of Aisha to be his wife, which he later consummated the marriage when she was just nine years old.

When Mohammad was little, his nurse Haleemah claimed that Mohammad had fits from gins, which is where we get the term genie. They’re spirits — evil spirits, demons — that she said tormented him constantly. By age 40, his torment was so intense and made him so crazy that he went into a cave to commit suicide.

But, before he could kill himself, supposedly the angel Gabriel came down and gave Mohammad a message. This is the message that Gabriel gave him. Gabriel told him that Mecca was too idolatrous. The people worshipped 360 different idols, one for each lunar calendar day, and they worshipped all of these around a fallen meteor called the Kaaba. Mohammad’s family god was Allah the moon god, which is even today represented by the crescent moon symbol. Gabriel supposedly told Mohammad that Allah is to be the only god worshipped in Mecca.

In response, what did Mohammad do? He listened to what the spirit told him. He went to Mecca and basically said to the people, “I’m sorry, you can’t worship these gods anymore, but only my god Allah.” Well, how do you think the people took that message? They drove him out. They didn’t like it very much.

Mohammad ran away to a local town called Medina, and that actually is the beginning event of the Islamic calendar. It’s called the Hijra. 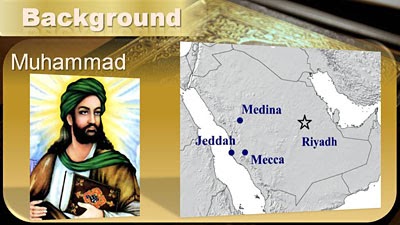 While in Medina, Mohammad became a prophet. He kept sharing his given message. He made a living by pillaging the caravans that came by.

Over time, Mohammad raised 10,000 men to join him. With this army, he went back to Mecca to conquer it. He promised his men a plunder, though a fifth of the money was to be his. He also would pardon the people of their sins. His people were promised that if they took Mecca they would go to heaven and get many virgins with “very large eyes.” These were the enticements he used which created the impetus and the motivation behind why his men fought.

This is the marching orders for his men, as found in Sura or chapter 5:33, “…the penalty for those who wage war against Allah and His Messenger and strive upon earth [to cause] corruption is none but that they be killed or crucified or that their hands and feet be cut off from opposite sides or that they be exiled from the land. That is for them a disgrace in this world; and for them in the Hereafter is a great punishment.”

So, when Mohammad went into Mecca, he said basically to the people he was attacking, “You join me or I’ll chop your hands off or I’ll kill you.” What did the people do then? They joined him! And that has been the driving force behind all of the Islamic “evangelism” to this day.

Two years later after a terrible battle, the daughter-in-law that he took as his wife was tired of all of her family members dying in his battles, so she poisoned Mohammad. He spit the food out in time, but he took enough in that along with pneumonia the combination finally killed him. In 632 AD in Medina Mohammad was buried. Mohammad is still there today.

In the third segment of this study on the fall of Islam, we’ll explore the faith of the Muslim by getting to know their god Allah and holy books.