The Fall of Islam: Islam’s Goals 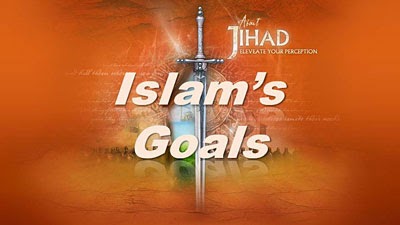 What are Islam’s ultimate goals?

We will now look at Islam’s goals, which is what they are trying to accomplish. There are three things. 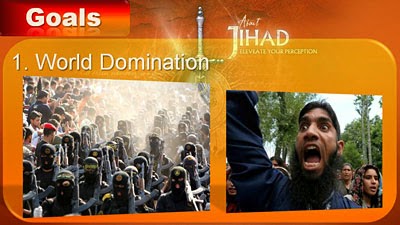 So, does that mean that Islam can be co-existed with? Does that mean Islam can be appeased? No. The basic teaching that Mohammad taught his people is that Islam must dominate the world for Allah as Gabriel told him. And, to do that, all infidels — all unbelievers — must be dead and or put into submission.

Goal #2: Shar’ia Law — Shar’ia means “the pathway to be followed” or in real translation “the path to the water hole.” It’s supposedly based on the infallible word of God for Muslims. Shar’ia Law is basically a Seventh Century teaching. It’s how people lived in Arabia in the Seventh Century. 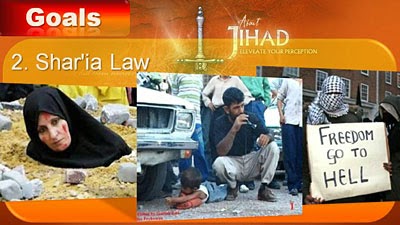 Shar’ia Law supersedes all the laws of a nations. So, when a Muslim comes into a nation that has a law which says a man cannot beat his wife, that’s not a problem for the Muslim, for the Koran says he can beat my wife. Every law that is taught in the Koran supersedes the laws of the host nation. That’s why when Muslims come into foreign nations they don’t integrate into their societies, because their laws teach them that they must remain separate.

Islam is a very difficult religion for women. Women are very confined.

If you commit apostasy you must be killed. In other words, if you convert from Islam, a Muslim has every legal right to kill you. Why do not many people leave Islam? It’s a death sentence if they do.

Goal #3: Death to the Jews — Islam believes that every Jew must be killed and Israel and Jerusalem must be retaken. There are three reasons why they hate the Jews so much and they want Israel back. 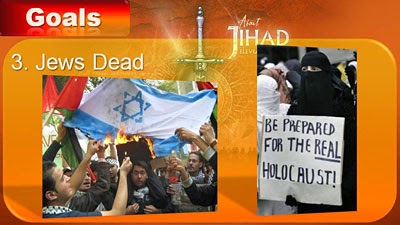 First, all land is for Allah. A portion of the Koran states that once the land has been conquered for Allah it must remain an Islamic land. When the Arabs had reconquered the lands after the Crusaders in the Middle Ages and they driven them out, now Israel has that land again. Losing Allah’s land is an offense to Allah. Since the Jews hold that land, it must be retaken back for Allah’s honor.

Does that mean any peace process in the Middle East is going to work with Israel remaining in the land? No. If Israel gives more land away, will that bring peace? No. Peace with Israel is not in the Islamic playbook. They must take every scrap of land that Israel owns.

Second, Islam is a works-based salvation. The Islamic religion must redeem themselves for losing the land for Allah, which is what the Muslim clerics teach.

Third, they have the belief in the superiority of Islam to other religions. To destroy Israel is to take away the foundation of one of the three major religions, as they believe. To keep the Dome of the Rock up on the Temple Mount is to declare to the entire world that they are the dominant religion. That’s why the Dome of the Rock is up there. It’s a message. It’s a flag of sorts that says, “We control the world. We have the best religion.”

In the sixth segment of this study on the fall of Islam, we’ll be amazed at how quickly Islam has spread across the world and how that’s been achieved.