The Revival of the Hebrew Language: Part 1 of 8 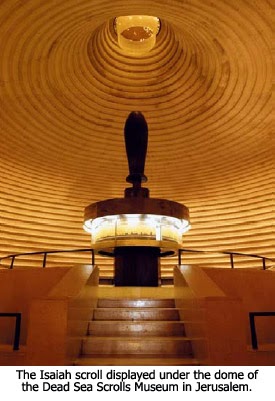 What is the key prophecy concerning the revival of the Hebrew language?

For many years I have been taking pilgrimage groups to the Holy Land. One of the places we always visit is the Dead Sea Scrolls Museum in Jerusalem. The centerpiece of the museum is the Isaiah scroll that is displayed in a circular glass case.

I usually gather my group around the scroll, explain its importance and then turn the group loose to explore the rest of the museum. One year, after releasing the group, as I was walking away from the Isaiah scroll, I heard someone behind me suddenly start speaking loudly in Hebrew. When I turned around to see who it was, I discovered a young boy about 13 years old with his parents. The boy was reading the scroll, using a pointer. I supposed he was practicing for his Bar Mitzvah, for reading a section from the Scriptures is always a part of that ceremony.

As I listened to the young man, I realized I was witnessing a miracle. It occurred to me that a Greek boy of his age could not read the Greek writings of Homer (ca 8th Century BC) nor could an American or British boy read the English of Chaucer (14th Century AD). Yet this boy could read Hebrew written 2,000 years ago.

How was that possible? Because biblical Hebrew has been revived from the dead and is spoken as the national language of Israel today.

The Death of the Hebrew Language

But I am getting ahead of my story. Let’s return for a moment to the days of the Bible.

The worldwide dispersion of the Jewish people began in 70 AD when the Romans ruthlessly ended their revolt against Roman rule by destroying the city of Jerusalem, including their marvelous Temple. This dispersion from their homeland was accelerated after their second revolt was put down in 136 AD.

As the Jews were scattered, they gradually stopped speaking their native language during the centuries that followed. Those in Europe took German and mixed it with Hebrew, producing a hybrid tongue called Yiddish. The Jews who settled in the Mediterranean basin mixed Hebrew with Spanish and developed a language called Ladino.

Hebrew became confined to the synagogues where it was used for Torah readings. By the beginning of the 20th Century, most Jews could not understand the Torah readings. For them, it was like a Gentile experiencing a Catholic mass conducted in Latin.

But all this was to change miraculously, and in the process, the fulfillment of a very important end time Bible prophecy began.

The prophecy I have in mind is one about the revival of the Hebrew language. It is found in Zephaniah 3:9 —

For then I will restore to the peoples a pure language, that they all may call on the name of the LORD, to serve Him with one accord. (NASB)

The New International Version states that the Lord will “purify the lips of the people.” The New Living Translation says God will “purify the speech.” The English Standard Version puts it this way: “I will change the speech of the peoples to a pure speech.” The Living Bible paraphrases the verse to read: “At that time I will change the speech of my returning people to pure Hebrew so that all can worship the Lord together.”

The more literal translations of this verse leave the clear implication that the ultimate fulfillment of this prophecy will occur when all the peoples of the world are once again unified in their language, likely speaking biblical Hebrew. Whether this will occur during the Millennium or the Eternal State is not made precisely clear in the Scriptures.

For example, Isaiah 19:18 says that during the Lord’s millennial reign, there will be cities in Egypt where people will be speaking Hebrew. And our key verse, Zephaniah 3:9, is set in the context of being fulfilled after God has poured out His “indignation” on the nations (Zephaniah 3:8). That’s speaking of the Tribulation, so the implication is that the establishment of a universal language will occur at the beginning of the Millennium.

On the other hand, Zechariah 8:23 tells us that during the Millennium, “ten people from all languages and nations will take hold of one Jew by the hem of his robe and say, ‘Let us go with you, because we have heard that God is with you'” (NIV). So, it sounds like national languages will continue during the Millennium, and thus the unity of language will not occur until we reach the Eternal State.

In the second segment on the amazing prophetic fulfilment of the return of the Hebrew language, we’ll look at the person who was key to reviving the long dead language.