The Revival of the Hebrew Language: Part 3 of 8 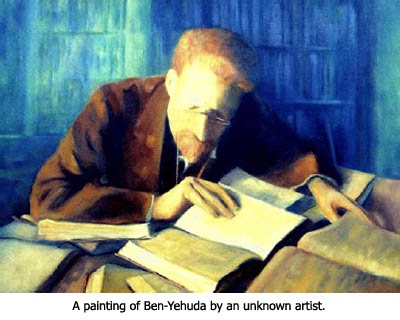 What was the key event that flared Ben-Yehuda’s passion to revive Hebrew?

Eliezer’s time at the state school was to prove to be a pivotal period in his life. During that time he was introduced to the concept of nationalism, and he became a zealot in behalf of it.13

In 1877 Russia went to war against the Ottoman Empire in behalf of the liberation of the Balkans. And the concept of nationalism — “one state for each nation” — became the battle cry that swept Europe and which ultimately led to the outbreak of World War I.

The war in the Balkans captured Eliezer’s imagination and awakened within him the idea that the Jewish nation, like all other nations, deserved its own state. Here’s how he explained it:13

After a number of hours of reading the papers and reflecting on the fate of the Bulgarians and their future freedom, suddenly, as if lightning struck, an incandescent light radiated before my eyes… and I heard a strange inner voice calling to me: “The revival of Israel and its language in the land of the forefathers!”… The lot was cast. My life and strength were given from that time onto the labor of reviving Israel and its tongue in the land of the fathers.

In 1878, at the age of 20, Eliezer arrived in Paris where he intended to study medicine. But his heart was in Palestine, as his homeland was called at that time. And his zeal was for the revival of the Hebrew language as a spoken tongue.

But all his dreams and hopes were suddenly derailed by his nagging cough. He finally went to a doctor for a diagnosis, and the news he received was devastating. He had developed tuberculosis.

He immediately wrote to Deborah to inform her. “I have the feeling of a person condemned to death,” he wrote. He continued, “For this reason I work now without sleep to put onto paper the reasons why it is so important for the Jewish world to become inflamed with the idea of returning to the land of our forefathers…”14 He then focused in on his greatest concern:15

I have decided that in order to have our own land and political life, it is also necessary that we have a language to hold us together. That language is Hebrew, but not the Hebrew of the rabbis and scholars. We must have a Hebrew language in which we can conduct the business of life. It will not be easy to revive a language dead for so long a time.

Eliezer closed this letter with a statement that would become his lifelong motto: “The day is short; the work to be done is so great!”

In his next letter to Deborah, he signed it Ben-Yehuda, and he added this postscript: “Do not be surprised that I sign a new name to my letter. This is the name which will appear over my articles. Someday I shall find the way to make it my own.”16

His new name had a double meaning. His father’s given name had been Leib, which was Yiddish for Yehuda. Thus, Ben-Yehuda meant Son of Yehuda. But Yehuda is the Hebrew word for Judea, and so the new name also meant that he considered himself to be a Son of Judea — a son of the land of his forefathers.17

In 1879, when Ben-Yehuda was only 21, a prestigious Vienna newspaper published an article of his titled, “A Burning Question.” The editor changed the name to “A Weighty Question.” It was to be one of the first ever Zionist manifestos, calling on the Jewish people to return to their homeland.

In the article, Ben-Yehuda became the first person to call for the revival of Hebrew as an everyday language.18 In the process of writing the essay, Ben-Yehuda had to invent a new Hebrew word for nationalism: leumiut.19 He signed the article with his new name — Eliezer Ben-Yehuda.

Predictably, the Orthodox Jews reacted furiously, denouncing Ben-Yehuda as a pagan because he had the audacity to suggest that their holy language be defiled by using it for everyday conversation.20 But Ben-Yehuda was not deterred. He immediately responded to his critics with a second article which he titled, “And We Have Still Not Learned Our Lesson.”21

In it he decried the political and philosophical divisions among the Jewish people and called for unity. He wrote, “Why do we not see, all of us whose eyes are so keen, that if we do not hurry to unite, the end is near, the horrible end of the hope of our people for an eventual redemption?” He then proceeded to ask a rhetorical question: “What is this one point on which all of us can unite?” His obvious answer: “The resettlement of the Land of Israel.”22

In the fourth segment on the amazing prophetic fulfillment of the return of the Hebrew language, we’ll look at a key discovery that directed Ben-Yehuda’s pronunciation of Hebrew.