Symbolic Prophecy in the Old Testament: Ark of the Covenant

What’s the prophetic symbolic meaning to the Ark of the Covenant?

To answer that question, Dr. David Reagan and I on our television program Christ in Prophecy invited Allan Walker of Allan Walker Ministries from Nowata, Oklahoma. Most Christians are familiar with written and oral prophecies in the Bible, but few seem to be aware of symbolic prophecies. When you become familiar with these, you can find Jesus throughout the pages of the Old Testament. Allan is an expert at identifying what these symbolic prophecies represent, especially concerning the Tabernacle of Moses.

Symbolism of the Ark of the Covenant

Dr. Reagan: Inside the Holy of Holies center to the Tabernacle of Moses was the Ark of the Covenant. What was the symbolism of the Ark?

Allan Walker: The Ark of the Covenant is well known to everyone probably because of the Indiana Jones movie.

It was made of acacia wood which grew in the desert, symbolizing Jesus as a root out of dry ground.

Inside the Ark of the Covenant were the Tables of the Law and Aaron’s rod which had budded supernaturally. That rod had originally been cut off a tree. When it budded supernaturally, that spoke of resurrection life, so there you see the death and resurrection of Jesus. Jesus said, “No man takes my life from Me. I have the power to lay it down. I have the power to take it up again, this commandment have I received from my Father.” 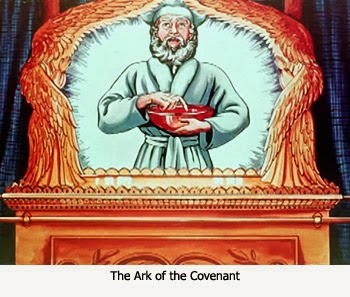 Then inside there was also a pot of manna. Manna spoke of the fact that man had broken God’s law, he had rebelled against the priesthood such as when Korah rebelled against the priesthood, and then man complained about the manna in the wilderness. Those speak of man’s threefold rejection of God. God looking down upon the contents of the Ark would see the sin and see the broken law, but the Mercy Seat, which was a solid slab of pure gold, covered over those elements . The High Priest would put the sacrificial blood on the Mercy Seat which was propitiating them and thereby putting sin off for another year.

Dr. Reagan: So, the Ark of the Covenant was a symbol that the death of the Messiah through the shedding of His blood would make it possible for the mercy of God to cover the law of God.

Allan Walker: That’s correct. Rather than facing the Law, we face grace. You and I have grace today because of what Jesus did by dying on the cross. These object lessons from the Tabernacle help us understand these spiritual truths in the New Testament.

Nathan Jones: Allan, you’ve got to tell us about the angels in the Tabernacle, because that’s my favorite part. Why were there two angels sitting on the Mercy Seat?

Allan Walker: One scholar once said that we born again believers are the curriculum that angels study. The angels look on at God’s plan of redemption and they see God’s involvement with man. And, as they are watching, they are facing each other looking upon the Mercy Seat. They see redeemed humanity and they are watching the ongoing conflict between good and evil.

The Bible also speaks of the angels guarding the essential Holiness of God — the Shekinah. The visible glory of God would appear there in the Holy of Holies. It’s a very beautiful picture of mankind being redeemed by the blood of Jesus Christ and angels studying and watching this transaction.

Dr. Reagan: John 20:11 talks about Mary going to the tomb of Jesus. Mary was standing outside the tomb weeping, and as she wept she stooped and looked into the tomb and she beheld two angels in white sitting one at the head and one at the feet where the body of Jesus had been lain. That there just grabs my attention, because what she saw was a fulfillment of the prophecy of the Ark of the Covenant. She saw the Mercy Seat where the Lord’s body had been lain and where the blood had been shed and she saw two angels who were hovering over that sacred spot, which is the fulfillment of what you’ve been talking about. Isn’t that amazing? It might sound like just another historical statement, but if you know anything about the symbolism in the Old Testament, you realize she is seeing the fulfillment of prophecy.

Allan Walker: Dave, you had pointed out something in one of your writings about the priest taking the blood and marking the earth.

Dr. Reagan: Yes, I wrote that he would step back and mark the earth. Tell us why he did that.

Allan Walker: He was claiming the earth. The Lord Jesus Christ will come back to rule and reign over every square inch of planet earth, and that’s typified there in the Old Testament through the blood offering. Many scholars believe that the Tabernacle itself with its types, shadows and symbols was a picture of the First Coming of the Lord Jesus Christ and His sufferings as He came to die and to redeem us. The Temple which was built later under Solomon was a picture of Christ in the Kingdom ruling and reigning as King of Kings and Lord of Lords. So, the Tabernacle is a temporary dwelling and the Temple was seen as the permanent dwelling, but then there is the eternal state beyond that as well.

Dr. Reagan: Wow! I tell you, that’s just amazing, isn’t it? All of that symbolism, and you’ve only touched the hem of the garment. In your teaching on this, you go into great detail and point out things that I never even thought of before that have to do with prophetic symbolism.

Nathan Jones: I used to wonder why was God so particular about the measurements of the Tabernacle and Temple and what was placed in them. He seemed so concerned as to how each item was to be made in the Tabernacle. Then you read in Hebrews 8:5 and 10:1 that these objects were a shadow of the heavenly things. So, the Tabernacle and the Temple are actually small scale versions of what we’ll see someday in Heaven, right?

Allan Walker: That’s right. All of this is extremely important. It illustrates the eternal truth. All the “I Am” statements of Jesus are typified in the Tabernacle: I am the Door. I am the Way the Truth and the Life. I am the Bread of Life. I am the Vine. You’re the Branches. I am the Gate. These are all pictures of Jesus Christ.

Nathan Jones: The Jews would have understood those symbolic meanings Jesus was referring to as He was teaching, right?

Dr. Reagan: Well, it would be difficult to find an object lesson more important than the Tabernacle was.

Dr. Reagan: Allan, is it true that people can go to your website and download free of charge a Power Point presentation about the Tabernacle, together with a 17 page script?

Allan Walker: Yes, there are 17 pages of notes and a 44 slide presentation that is royalty free and available for downloading.

Dr. Reagan: That’s wonderful! I hope our people will do that, because this needs to be taught everywhere.