Symbolic Prophecy in the Old Testament: The Tabernacle of Moses

What’s the prophetic symbolic meaning to the Tabernacle of Moses?

To answer that question, Dr. David Reagan and I on our television program Christ in Prophecy invited Allan Walker of Allan Walker Ministries from Nowata, Oklahoma. Most Christians are familiar with written and oral prophecies in the Bible, but few seem to be aware of symbolic prophecies. When you become familiar with these, you can find Jesus throughout the pages of the Old Testament. Allan is an expert at identifying what these symbolic prophecies represent, especially concerning the Tabernacle of Moses.

The Tabernacle of Moses

Allan Walker: The Scriptures says, that out of the mouth of two or three witnesses let every word be established. And, there are certain things in the Word of God that are just mentioned a time or two. Then there are other great themes of the Word of God i which heavy emphasis is given. There are some 50 chapters in the Bible dedicated to the Tabernacle, and if God dedicates 50 chapters to something, then we know it is a central theme of the Word of God. We need to major in the majors, and minor on the minors, so to speak.

Dr. Reagan: So, I take it that the Tabernacle is a major. Can you tell us why?

Allan Walker: Yes, because the Tabernacle foreshadows the redemption of humanity. We need object lessons to help us understand spiritual truth, such as the death of the Lord Jesus Christ which is typified or pictured in the Tabernacle.

There are probably several hundred lessons we could learn from the Tabernacle, but we’ll just hit the high spots today. 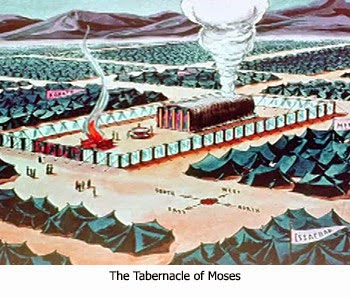 We know that there was a seven foot high white linen fence that went around the outside of the Tabernacle called the Outer Court. That seven foot high fence illustrated the fact that man didn’t have the righteousness necessary to come directly into God’s presence. There was only one gate leading into the Tabernacle, typical of the fact that Jesus is the only way to Heaven. Jesus said, “I am the way.” He didn’t say, “I am one of many ways.”

Dr. Reagan: Let’s just pause here for a moment and clarify one thing for those who may not be that familiar with the Tabernacle. When we talk about the Tabernacle of Moses, what we are talking about is a tent temple that the Children of Israel carried with them during their 40 years of wandering in the wilderness. It existed before the Israelites built a permanent Temple in Jerusalem. This a nomadic temple that was made of tents and it had a linen fence around it and a gate.

Allan Walker: Yes, the Tabernacle was the center of the sacrificial system. We’re all familiar with the basic truth of the Word of God that says, “Without the shedding of blood there is no remission of sin.” Well, when the priest came into the gate, the first piece of furniture he saw there was the Brazen Altar, which was a picture of the cross. The sacrificial blood was offered there. Then the priest would have to take the blood and go into the Holy of Holies, and as a result their sins were put off for another year. 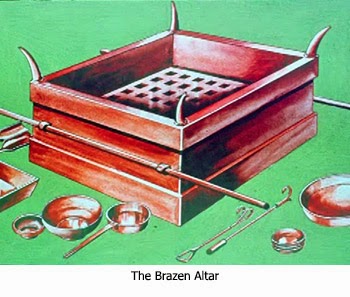 There was no chair in the Tabernacle, the priest couldn’t even sit down as his work was never finished. Over and over those offerings had to be made. The book of Hebrews points out very clearly that the sacrificial system was a system that was only temporary. It was pointing toward the one sacrifice that the Lord Jesus Christ would make on the cross. When Jesus died on the cross He cried out tetelestai which is a Greek word meaning “paid in full.” Translated it means, “it is finished.” Jesus put away our sin by the sacrifice of Himself. You and I as New Testament Christians live under a much better covenant than the covenant of the Old Testament.

Dr. Reagan: What was the next object that the Israelite priests came into contact with in the Tabernacle?

Allan Walker: The next object was the brazen laver which was made out of the looking glasses of the women from Egypt. It had the water in it that the priest would use to wash before they could come in to do their priestly services. Many scholars believe that the Brazen Laver is a picture of the washing of water by the Word, that not only must we be saved by the sacrifice of Christ, but we must apply the Word of God to our lives, bringing ourselves into conformity with the Word of God with the help of the Holy Spirit. Just as the priest had to wash themselves and could not bypass the Brazen Altar, or the Laver, we had to come that way by a washing of God’s Word as well. 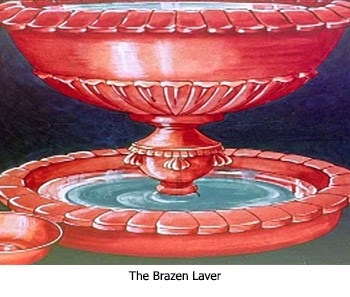 Dr. Reagan: That now places us at the entrance into the Tabernacle itself.

Allan Walker: Yes, there were five pillars on the front of the Tabernacle. They remind me that Jesus is Wonderful, Counselor, Mighty God, Everlasting Father and Prince of Peace. They rested upon sockets of brass. As you remember, the Brazen Serpent was lifted up in the wilderness so that the people dying from the snake bites would be healed, which is where we get our modern day symbol for healthcare. That was a symbol that sin had to be judged before man could come into the presence of God. We can’t come to God with our own unrighteousness. We must have His righteousness to have a relationship with God. 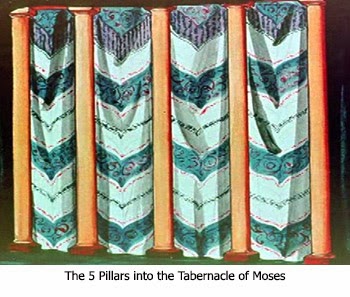 Dr. Reagan: When you enter the Holy Place, what do you find there?

Allan Walker: The Holy Place had the Golden Lampstand. It’s a seven-branched lampstand made out of a talent of pure gold consisting of a central branch along with six other branches. The priest would fill it with olive oil, which was a picture of the Holy Spirit. Also, the lampstand was the only light in the Holy Place, because there was no natural light filtering in. 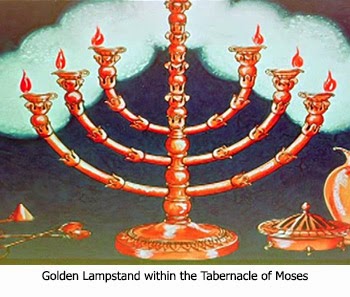 Dr. Reagan: Could the Lampstand be a symbol of Jesus or the Messiah as the light of the world?

Allan Walker: Yes, Jesus said He is the Light of the World.

Nathan Jones: The seven-branched Lampstand could also stand for the sevenfold spirit of God?

Allan Walker: Yes, the sevenfold spirit is represented by the seven branches. The number seven is found predominately throughout the Tabernacle as well as in many other places in the Old Testament. Another interpretation, some scholars see Jesus as the central branch and we as born again believers are grafted in. As John 15:5 says, “I am the vine; you are the branches.” 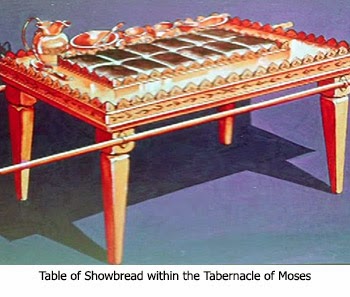 Allan Walker: With the Table of Showbread, Jesus represents the bread of life, and so we must feed upon the bread to sustain ourselves, just like the priests did as they performed their priestly ministry. It was unleavened bread. Leaven was compared to a type of sin and false doctrine. No leaven speaks of the sinless life of Christ.

Dr. Reagan: That brings us to the entrance into the Holy of Holies where the veil is.

Allan Walker: Yes, the veil separated man from the presence of God. Man couldn’t enter the presence of God apart from blood sacrifice. Only the priest could come in behind the veil with the blood and then put off sin for another year. But, when Jesus died on the cross, that veil was rent. 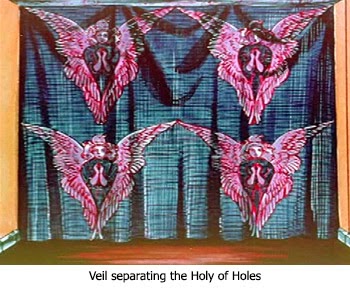 Nathan Jones: Not only was the super thick veil to the Holy of Holies torn in half, it was rent from top to bottom, proving only God could have ripped it in half.

Allan Walker: And signifying that the way into the presence of God was opened up for man. Interestingly enough, Scofield says that the priests patched that veil back up and continued to offer animal sacrifices for another 40 years after the death of Jesus, even when salvation had already been completed by the work of the Son of God.

In the fourth and last segment of this series on symbolic prophecy in the Old Testament, Allan will explain the symbolism within the Ark of the Covenant.