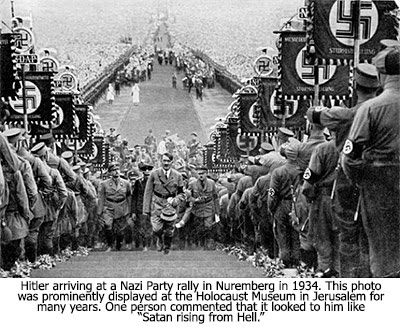 The question posed is one I have often asked people, and the answer I have always received is a resounding, “NO!”

The reasons given usually include such things as:

Those are good reasons, and on the surface, they seem invincible. But they are not.

We need to remind ourselves that pre-Nazi Germany had a strong Christian heritage. It was, in fact, the heartland of the Reformation Movement.

Germany also contained a highly educated and erudite population, and was a land of literary giants and scientific geniuses. It was, in fact, one of the most advanced civilizations on earth.

And Germany also had a democratic government. In fact, Hitler was elected to power.

So, what happened? The nation’s economy was destroyed by World War I and the draconian reparations Germany was required to pay after the war. Racked by a runaway inflation and widespread joblessness, the German economy created the kind of despair that will motivate people to seek desperate solutions.

Our nation is a sitting duck for the same type of peaceful transition to the form of totalitarian dictatorship that Hitler instituted.

Just think about it for a moment.

In the 1960s we began to jettison our Christian heritage. It happened quickly and decisively, and it continues to accelerate to this day. The culture war has been won by the secularists and pagans, and we can no longer claim to be a “Christian nation.” Without the inhibitions of Christian morality, the demons have been let loose. And so, on a daily basis, we witness senseless killings and gross immorality.

Churches have gotten in bed with the world, endorsing such biblical abominations as homosexuality and same-sex marriage. And they have surrendered to the demands of “tolerance” by embracing such heresies as “many roads to God.” Polls show that the number of Bible-believing Christians in America is no greater than 9%. The Church has ceased to be a restrainer of evil.

Our level of education is certainly very high, but we have kicked God out of our educational institutions from the pre-school to the graduate level. The result is a pagan education that teaches our children that there is no God and that they are simply the accidents of evolution. In short, they are being taught that they are nothing more than a higher species of animal, and they are acting like it.

Our culture is becoming increasingly depraved. Immorality is being encouraged by our governments, and it is being celebrated in our movies and television programs. Hedonism and materialism are the driving forces in our culture. The dollar has become our god.

Our democratic heritage is also being rapidly undermined by the centralization of power in the national government and its ever-increasing welfare programs. More and more people are becoming wards of the state, and when it comes to voting, their only concern is which candidate will promise to give them the most “free stuff.”

Our governmental leaders, particularly at the national level, have become so corrupt that we can no longer believe anything they have to say.

Our nation is becoming increasingly polarized. The two coasts are battling the center of the country. The young are fed up with having to support our exploding class of senior citizens. Blacks and Hispanics are at each other’s throats. Pagans continue to try to silence Christians.

In the second part of this series on Hitler’s Nightmare, I’ll identify what the spark could be that would set off a second American civil war.