An Eye Witness Report About Life Under Hitler

In 1979 a book written by Jan Markell was published by Tyndale House entitled Angels in the Camp. It was the gripping story of a Holocaust survivor by the name of Anita Dittman.

This year WND Books republished the book under the new title, Trapped in Hitler’s Hell, and they also made a documentary film about the book.

I had heard a lot of good things about the book, but I had never read it. When the new edition was published, I decided to put it at the top of the stack of books I hope to find the time to read. The opportunity came in early July when I was driven by one of my staff members to a church in Oklahoma where I was scheduled to speak.

When I returned to the office, I immediately sent an email message to Jan Markell in which I told her that I found the book to be “mesmerizing, fascinating, informative, inspirational and God-exalting — a masterpiece of writing.” I also told her that I was so impressed with it that I was going to purchase a copy for each member of the Lamb & Lion staff.

The foreword to the new edition was written by Ray Comfort, a Messianic Jew from New Zealand who heads up Living Waters Publications and is the co-host (together with Kirk Cameron) of the television program called The Way of the Master. In his foreword, he states:

Trapped in Hitler’s Hell is more than just a gripping story. It is living history. It’s a human experience of the Christian faith that induces empathy from the reader. I was so moved by its account that I sought out Jan Markell to say how its pages had affected me.

May God use this wonderful publication to remind us of the darkest of times in human history, to help us appreciate liberty and to display the power of Christian faith in times of gross darkness.

Reading these comments by Ray Comfort should prompt you to ask how a Jew’s experience in the Holocaust could possibly be a “display of the power of Christian faith.” The answer is that Anita Dittman and her mother were both devout Christians, but because of their Jewish heritage, they were considered by the Nazis to be biologically “tainted.” They were therefore persecuted, tormented and ultimately imprisoned by the Nazis.

The book concludes with a thought-provoking question: “What nation is not capable of the same kind of tyranny?” Anita’s final comment is reassuring:

The book runs 203 pages in length. It is illustrated with many very interesting photos. 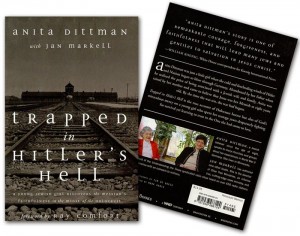