The Forgotten Promises of Christmas 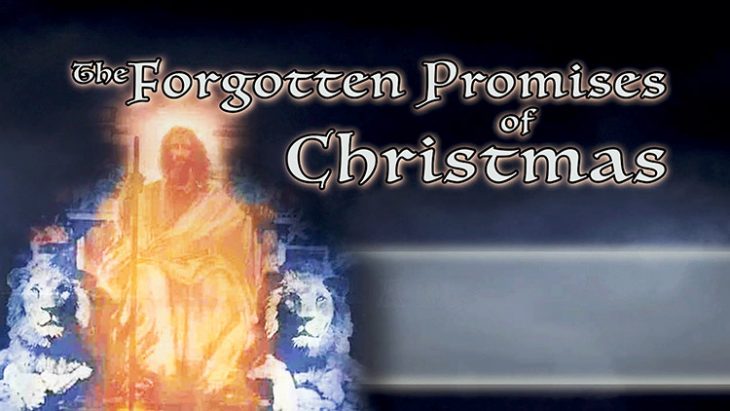 As we celebrate the birth of Jesus each year during the Christmas season, let’s remember the promises that were made to Mary when she was visited by the Angel Gabriel:

Behold, you will conceive in your womb and bear a son,
And you shall call His name Jesus.
He will be great, and will be called the Son of the Most High;
And the Lord God will give to Him the throne of His father, David,
And He will reign over the house of Jacob forever;
And of His kingdom there will be no end.
– Luke 1:31-33

This magnificent statement contains seven promises. Four of them relate to the First Advent of the Lord, and they have thus all been fulfilled. Mary did conceive and bear a son. His name was called Jesus. He was great, and He was called the Son of God.

The last three promises which Gabriel made to Mary have not been fulfilled. They relate to the Second Coming of Jesus:

I call these three promises the “forgotten promises” of Christmas because they are not taught by most churches in Christendom today. That’s because most churches take the position that Jesus will never return to this earth to reign. This is called the Amillennial viewpoint.

The Amillennial view is based upon the supposition that the Bible does not mean what it says. To substantiate the viewpoint, its proponents are forced to spiritualize Scripture.

Thus, in their interpretation of the passage quoted at the beginning of this article from Luke, they convert the throne of David into the throne of God and the house of Jacob becomes the Church. They then conclude that the promises have been fulfilled in the current reign of Jesus from His father’s throne over His Church.

The Throne of David

There is no doubt that Jesus is currently reigning from His father’s throne over His kingdom, the Church. But to identify that reign with the one promised to Mary takes a great leap of imagination.

Jesus Himself clearly differentiates between the throne of God and His own throne in Revelation 3:21. In that verse, Jesus says that He will one day allow believers to sit with Him on His throne just as His Father has allowed Him to share His throne.

The House of Jacob

The “house of Jacob” is not the Church. This is an Old Testament term for the children of Israel (Ex. 19:3). The Church is never referred to in Scripture as the house of Jacob.

The Bible teaches that a remnant of the Jews will one day accept Jesus as their Messiah (Zechariah 12:10 & Rom. 9:27). This will occur at the end of seven years of terrible suffering called the Tribulation, or “the time of Jacob’s trouble” (Jeremiah 30:7).

When Jesus returns at the end of that time of suffering, the Jewish remnant will be gathered to the land of Israel and will be made the foremost nation in the world (Ezekiel 37:11-28 & Zechariah 8:22-23). Jesus will then rule over the house of Jacob.

The current Church kingdom is not an everlasting kingdom. The Church Age kingdom will end with the rapture of the Church.

The Church kingdom will be followed by the Millennial kingdom when Jesus will reign over all the earth from Mt. Zion in Jerusalem (Isaiah 2:1-4). That kingdom will last one thousand years (Revelation 20:1-7).

The final, eternal kingdom of Christ will be established on a new, perfected earth (1 Corinthians 15:24 & Revelation 21:1-8).

Why can’t we accept the promises made to Mary to mean what they say? The first four meant exactly what they said. Why must the last three be spiritualized? The only reason for spiritualizing them is to force them to conform to some preconceived doctrine.

I believe God knows how to communicate. If God had intended to promise Mary that her Son would reign from Heaven over the Church forever, He would have said so. Instead, He reaffirmed to her the promise He had made many times through the Old Testament prophets that His Son would reign from David’s throne in Jerusalem over Israel and that He would be given a kingdom that would last forever (Isaiah 9:6-7 & Ezekiel 37:21-28).

During the next Christmas season I am going to praise God for sending His Son to die for my sins.

I am also going to pray that God will soon send His Son again to fulfill the “forgotten promises” which Gabriel made to Mary. I thank God that He never forgets a promise.