Experts Panel on the Future of Israel (Part 3 of 3)

What does the Bible say about the future of Israel?

It appears today that Israel has no hope. It is a tiny nation the size of New Jersey with only six million Jews, and it is trying to exist in an area where it is surrounded by 22 Arab nations with over 300 million people who are determined to destroy it. Does Israel really have any hope? Or, is it doomed to annihilation as a nation and extinction as a people?

A panel of 17 Bible prophecy experts answers those very questions! To find out, read or watch below.

The nation of Israel will continue to exist forever. It doesn’t matter how many people want to try to destroy it. It doesn’t matter if some nations have a commitment to remove even the remembrance of Israel, like the nations say in Psalm 83. Israel is going to be here forever.

That doesn’t mean that part of Israel will not, for a short period of time during the last part of the Tribulation, be removed by God to a special place of protection. I don’t know where that is, but the partial exiles will be brought right back to Israel.

A believing remnant of Israel and believing Gentiles will live on into the thousand year reign of Jesus. The Jewish people will be there, too. They are going to be in the land forever. The history of the Jewish people is one that will not be terminated in any way.

According to prophecy, Israel is going to go through a seven-year period of tribulation. We find this in Jeremiah 30:7 where he says, “Alas, for that day is great so that there is none like it. It is even a time of Jacob’s trouble, but he shall be saved out of out.” Israel is back in the land, but they are back in the land in unbelief in preparation for a seven-year period of tribulation to come.

People ask, “August, what is the purpose of this seven-year period of tribulation?” I answer that it’s to bring an unbelieving Israel to faith in Yeshua as their Savior and their Messiah. They have to go through a seven-year period of tribulation in order to get them to that point. Zechariah 13:8-9 tells us that two-thirds of the Jewish people will lose their lives at the hands of the Antichrist, but a third will be brought through the fire to come to faith in Jesus Christ at His Second Coming back to this earth.

Passages like Jeremiah 30:7; Daniel 12:1; and Jesus in Matthew 24:21 read, “There shall be great tribulations such as was not since the beginning of the world until this time, no, nor ever shall be.” Revelation 7:14 says the period of tribulation will be seven years that Israel is going to be in for a real bad time. But, there is good news, for Jesus Christ will come back and all Israel shall be saved.

I believe that Israel is faced with plenty of good times which makes them more attractive for the Arab terrorists who want to come down and snuff them out. But, they’re also very perilous times. Even before the Rapture, or before the Tribulation period, because much is said about what’s going to happen during that seven years, but before that Israel is going to become the target of the Arab world and Russia. And isn’t that interesting? Those nations are colleagues today. They’re going to come down against Israel according to Ezekiel 38-39. God is going to do what He did in the Old Testament when He brought Israel out of Egypt. He’s going to show His strong arm. Eight times in those two passages in Ezekiel 38 & 39 we’re told God is going to show His strong arm so that all the world will know that He is the Lord. How? By saving Israel when they can’t save themselves. Their allies will not save them, for they will have none. That’s where God comes in. But, be sure of this, this is not the end of Israel.

Prophetically the Bible is always filled with a combination of good news and bad news. It’s only bad news for the unbeliever. It’s always good news for the believer who has the Blessed Hope that gives us hope to anticipate the coming of Christ.

For the nation and people of Israel, I would foresee several things prophetically. First of all, Israel will eventually, on the bad news column, suffer an invasion of several nations against her in the end times. The book of Ezekiel and other passages make that very, very clear.

On the good news side, God will dramatically intervene on Israel’s behalf and she will win that Gog-Magog War. There will then be a wave of Jewish nationalism and excitement, even leading to the rebuilding of the Third Temple.

But, on the bad news side, Israel doesn’t through all of that come to a real experience with Christ Himself. Eventually the Antichrist will deceive them after the time of the Rapture into signing a peace treaty with him. He will break the treaty, turn against them, invade Israel, and literally everything will go wrong. Israel will end up having to flee into the wilderness.

God will use those experiences of the Tribulation period to bring many of the Jewish people to faith in Yeshua as Messiah. They will come to understand that Jesus really is the Son of God. He really is the Savior. They’ll remember the Rapture had occurred and they have been left behind, and in the follow-up of that, everything has gone wrong.

God will raise up two witnesses to proclaim the truth of the Gospel from among the Jewish people themselves. Then at least 144,000 will be converted, and I believe many, many more then even that number. God will do an amazing work in the hearts of His people and they begin to finally cry out, “Blessed is He who comes in the Name of the Lord.” By the end of the time of Tribulation, the world will see a wave of conversions in Israel like we have never seen before in all of history. Then there’s the dramatic return of Christ. The good news is the literal reign of Christ on earth for a thousand years from the Throne of David in Jerusalem.

When things seem to be going wrong, we always want to remind ourselves God is always going right. He’s on the throne. He knows what He’s doing. God will fulfill His prophetic plan for the nation and people of Israel.

Bible prophecy clearly states that the nation of Israel will continue to exist, despite the fact that there appears to be no hope for the Jewish people. Of course, the key to all of this is that the Scriptures say that “He who keeps Israel neither slumbers nor sleeps.” That Scripture reminds me of a cartoon showing a tug of war between Israel and the rest of the world’s nations, and Israel is winning because God has His finger on the rope on Israel’s side. 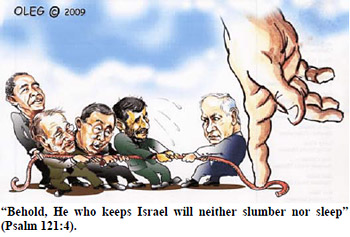 Let me try to provide you with a summary of Israel’s future, presenting the events in chronological order.

Israel will soon experience a major war with her immediate neighbors, those with whom she has a common boundary, and she will win that war overwhelmingly. The whole Arab world will then turn to their natural ally, Russia, and appeal for help. The Russians will respond with a major invasion, together with many Muslim allies, and this great invasion army will be supernaturally destroyed by God on the mountains of Israel.

At that point, the Antichrist will emerge and guarantee the peace of Israel, enabling them to rebuild their Temple in Jerusalem. This treaty will also mark the beginning of the Tribulation, a seven-year period of unparalleled horror upon the earth during which one-half of the world’s population will die and two-thirds of the Jews will be killed. But, God will supernaturally preserve a Jewish remnant through this holocaust, and at the conclusion of it, the Jewish people will be brought to the end of themselves and will accept Yeshua — Jesus — as their Messiah, resulting in the salvation of a great remnant. They will cry out, “Baruch Haba B’Shem Adonai,” meaning, “Blessed is He who comes in the name of the Lord.”

That remnant will then enter the Millennium in the flesh and will serve as the initial population of the state of Israel. Jesus will reign in Jerusalem as the King of kings and Lord of lords. David, in his glorified body, will reign as the king of Israel. And to this Jewish remnant and their descendants, God will fulfill all the kingdom promises that He has made to Israel. The nation will serve as the prime nation of the world, and through it all God’s blessings will flow to the other nations. This is why the Bible says in Zechariah 8:23 that in those days when ten Gentiles see a Jew walking by, they will grab his robe and say, “Let us go with you, for we know that God is with you!”