What causes the United States to suffer from spiritual rabies?

[Note: Our guest author is Al Gist, the founder of Maranatha Evangelistic Ministries in Longville, Louisiana. Al is a former petroleum engineer and pastor who decided in the year 2000 to commit himself full-time to the preaching and teaching of Bible prophecy.

In July 2015, Lamb & Lion Ministries held a Bible conference with the theme “Messages for a Rebellious Nation.” Al was one of six outstanding speakers at the conference, and he presented a powerful message titled “A Rabid Nation.” The following is a portion of that message.] 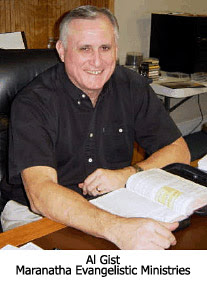 Whether we are talking about the political realm or the religious realm, the core problem is still the same — it’s a departure from God and a departure from His Word. Like leaven in the loaf, sin once introduced in society, unless it is eradicated by the cleansing blood of the Lamb, will continue to grow until it consumes the whole country. Like rabies, it grows until it eventually distorts clear thinking and it culminates in delirium and death.

Our nation’s problems all stem from the same problem that it’s always been — Sin. It is all because of sin. Sin consumes the hearts of our people. Our problem is a spiritual problem, not a political one. It’s not getting the right party in office. It’s about getting people connected with God again.

The seemingly innocent or sinfully minor actions that seem to be so insignificant at first, they will eventually lead to insanity. And, nowhere today is the delirium of or national spiritual rabies better demonstrated then by the nine people who are seated upon the U.S. Supreme Court of America. They have been allowed to dictate to the whole nation what is right and what is legal. The United States Supreme Court has time and time again chosen to ignore God’s Word. They have heaped upon us decision after decision that has contradicted the righteousness that God desires to see in His people.

I’m 61 years old, and from my perspective the onset of spiritual rabies began in the early 1960’s, about the same time that I saw that great movie Old Yeller. It was during that time that our nation contracted spiritual rabies, a potentially fatal disease I remind you if left untreated. It was at that time that the United States Supreme Court decision of Engel v. Vitale decided and I quote, “that government-directed prayer in public schools was an unconstitutional violation of the Establishment Clause.”

This decision was followed by subsequent decisions as the Supreme Court banned Bible reading as part of the school curriculum in Abington Township School District vs. Schempp in 1963. Then they banned student-led, student-initiated prayer at football games, graduations, and other school activities in the decision of Santa Fe Independent School District vs. Doe in the year 2000.

Immoral decision after decision has been forced down our throat by those nine people on the Supreme Court. They are pushing people away from God. This chosen path where the United States Supreme Court is taking God and His Word out of our society and out of our public institutions I believe initiated the spiritual rabies that we are now suffering from. Like the physical disease, once it reaches the brain, there is no treatment.

That spiritual degradation, that rebellious attitude towards God, the God who created us and made us the most powerful and the most prosperous and the most blessed nation in the entire world, it has gone too far. I’m telling you that the spiritual rabies infection has reached the brain and is producing delirium, and that state of mind cannot make good decisions.

Do you think it’s possible that our nation could repent and once again turn back to God? Yes, I believe that as it was in the days of Jonah when he preached to the wicked people of Nineveh, that if we would repent in sackcloth and ashes and turn back to God, that our God who is a merciful God would receive us and forgive us and restore us. But, do I think that’s going to happen. No. I’m just being honest. No, I don’t think that’s going to happen.

When we took God and His Word out of our schools in the 1960’s, we spawned a whole generation that had no respect for Scripture or the Bible in any form. Unfortunately, the school house was the only place where some kids were ever put in contact with the Word of God. That’s not good, but that’s simply the way it was.

It is said that what one generation will do in moderation the next generation does in excess. So, we took God out of our children’s lives. From that came the wanton disregard in the next generation for human life, the most sacred of all God’s creation. Personal convenience was raised up over the value of human life and murder was legalized upon the most helpless of all segments of society — the unborn child.

We dare not point our hypocritical fingers at the Nazis of World War II, who killed some eleven million people, six million of whom were Jews. We ourselves have slaughtered multiplied millions upon millions of children! We dare not try to take the speck out of Germany’s eye when we have a beam in our own eye. Since Roe vs. Wade in 1973, we’ve killed almost 58 million unborn children. It is a holocaust of all holocausts!

And still, things keep getting worse. How could it be worse? After legalized abortion came not just the acceptance, but the celebration of that which the Bible calls an abomination as the homosexuals began their radical push to be recognized by law as a specially protected class of citizens. On October 28, 2009, President Barack Obama signed into law the Local Law Enforcement Hate Crimes Prevention Act. Among other things, the bill adds gender, gender identity, and sexual orientation to the list of protected categories under federal hate law crimes. This effectively places every homosexual, pedophile, transgendered, and other abominable sexual orientation in a special, federally protected class under the federal hate crimes law.

I don’t know that hate crimes has been used to any great degree to persecute the Church. But, there is no doubt that it opened the door for such persecution against any pastor who would be so bold as to stand in his church and proclaim that homosexuality is wrong. It is not of God. The Bible calls homosexuality an abomination. It’s a distortion of God’s design for the family.

Sadly, some business owners, who because of their religious beliefs have refused their services to homosexual couples, have either been fined or even had their businesses closed. I assure you that the day is coming when pastors will be fined and/or jailed for preaching the truth of the Bible. Churches will be prosecuted on charges of discrimination for not hiring an openly homosexual applicant on their staff. Eventually, no doubt, fundamental, conservative Christians will be attacked for promoting anti-social hate doctrine.

This law is just another example of political correctness gone a muck. This homophobic paranoia has led Congress and the President to acts of delirium. They are confused and suffering from cerebral dysfunction. People singled out and criminally attacked because of their sexual identity? Yes, I’m sure that some are. People are singled out and attacked criminally for all sorts of reasons. Some people are criminally attacked just because they’re male or because they are female. But, that doesn’t mean we need to put them in a special category that is protected by hate crime law just because their victim happens to be gay.

How much simpler and more straightforward an answer could you possibly give? She was simply giving an honest answer to the question about her personal beliefs. She made no derogatory remark towards homosexuals. She even said that it was not her intention to offend anyone with her answer.

And yet, Carrie Prejean was lambasted by the liberal media and by homosexual activists. She was later stripped of her Miss California title on grounds of “continued breach of contract issues.” One can believe what they want to believe as to why Carrie was so attacked, but it’s apparent she was attacked because she stood upon the biblical standard.

Tragically, biblical authority has all but vanished in America. Has the virus reached the brain?

If one doesn’t think the spiritual virus of depravity has reached the brain here in America, then obviously you didn’t hear the news on June 26, 2015. How could anyone miss it? For me it was it was the darkest day in American history, far worse than December 7, 1941 or 9/11. For as bad as those days were in the loss of lives of U.S. citizens, they do not compare to the great horrible mess and the spiritual depravity that the United States of America suffered on June 26, 2015.

The rejection of biblical marriage for the legalization of gay marriage is when we as a nation finally died spiritually.