Most people are familiar with Holocaust Denial — the assertion that the Holocaust is a myth conjured up by the Jews to create sympathy and support for the Jewish people. But few seem to be aware of a similar anti-Semitic concept called “Temple Denial.” It is the claim that no Jewish Temple ever existed in Jerusalem on the Temple Mount.

This idea circulated among Muslims for many years, but it did not become well known until the year 2000 when Yasser Arafat proclaimed to President Clinton at the Camp David Summit Conference that “Solomon’s Temple was not in Jerusalem, but Nablus.”1 This bizarre claim was picked up by the press and was circulated worldwide. Two years later, Arafat again asserted that there was “not a single stone proving that the Temple of Solomon was there [in Jerusalem] because historically the Temple was not in Palestine at all.”2 Then, to everyone’s amazement, he claimed it was located in Yemen and that he had personally visited the site!

Despite the fact that Arafat was neither an historian or an archaeologist or a student of the Bible, his insane assertion spread like a wild fire across the Muslim world, and since that time, it has become a “fact” in Muslim thinking.

What makes this particularly strange is that there is a long history of Muslim affirmations that the Jewish Temples were located on the Temple Mount.

For example, Sura 17:1 in the Quran tells about a miraculous night journey of Mohammed from the “Sacred Mosque” in Mecca to the “Farthest Mosque,” whose location is not identified. No mosque of any kind existed in Jerusalem during Mohammed’s lifetime, yet over the years, Muslim commentators have claimed that it was located in Jerusalem. What is relevant to Temple Denial is the fact that an 11th Century Muslim historian and a 14th Century Iranian religious scholar both claimed in their writings that the mosque was the Al-Aqsa Mosque (which sits on the Temple Mount today) and that the mosque “was built on top of Solomon’s Temple.”3 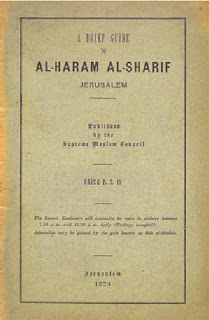 The 1924 Islamic guidebook to the Temple Mount which affirms that the Jewish Temples were located on the Mount. “Al-Haram Al-Sharif” is the Islamic name for the Dome of the Rock. It means, “The Noble Sanctuary.”

An almost identical affirmation of the Jewish Temples being located on the Temple Mount can be found in the guidebooks to the Dome of the Rock that were published by the Supreme Muslim Council in Jerusalem, beginning in 1924. All of them contained the following statement:4

The site [of the Dome of the Rock] is one of the oldest in the world. Its sanctity dates from the earliest (perhaps from pre-historic) times. Its identity with the site of Solomon’s Temple is beyond dispute. This, too, is the spot, according to the universal belief, on which David built there an altar unto the Lord, and offered burnt offerings and peace offerings (2 Samuel 24:25).

This statement was contained in all of the guidebooks up to and including the one published in 1950. But after 1950, the statement was inexplicably removed from subsequent issues.5

Today, Temple Denial has become an integrated part of Palestinian mythology, affirmed by politicians, clerics and scholars. Together with the equally absurd claim that Jesus was a Palestinian, an attempt is being made to erase the Jewish presence from the history of the land.

Palestinian President Mahmoud Abbas is both a Holocaust Denier and a Temple Denier. He had this to say about the Jewish Temple: “…they [the Jews] claim that 2,000 years ago they had a Temple. I challenge this assertion that there ever has been a Jewish Temple. But even if so, we do not accept it…”7 How’s that for logic?

Walid Awad, former director of publications for the PLO, stated in December 1996 that the Jewish Temple was probably located in “Jericho or somewhere else.”8 The Palestinian Authority’s chief religious official, Taissir Tamimi, has stated, “I know of Muslim and Christian holy sites in Jerusalem, but I don’t know of any Jewish holy sites in it.”9

A Palestinian academic, Dr. Issam Sissalem, Professor of Middle East History at the Islamic University of Gaza, has asserted that Solomon’s Temple never existed. He has further stated that the idea of such a Temple “is the biggest lie in history by those liars [the Jews].”10 A few years later, he added, “There is no historical text that proves the existence of Solomon’s Temple, or that it has a real history, other than the Bible, and the Bible…was based on ancient legends.”11

In November of 2014, the PLO’s Department of National Affairs issued a warning to journalists not to use the term, “Temple Mount” when describing the site of the Dome of the Rock and the Al-Aqsa Mosque.12 The reason for this demand: “The Al-Aqsa Mosque compound is not a disputed territory and all other terms, therefore, are null and void.”

All of these Alice-in-Wonderland statements are simply part of a propaganda campaign to divorce the Jewish people from their historic capital city. And all their hot air is a total waste of time because the Bible makes it clear that a Third Temple will be built in Jerusalem on the same location as the first two — and that will be on the Temple Mount (2 Thessalonians 2:3-4, Revelation 11:1-2 and Revelation 13:6).

1) Dennis Ross, The Missing Peace: The Inside Story of the Fight for Middle East Peace (New York: Farrar, Straus and Giroux, 2005), page 694.

6) Committee for Accuracy in Middle East Reporting in America (CAMERA), “The Battle Over Jerusalem and the Temple Mount,” November 6, 2014, www/ca,era/prg/index.asp?x_context=7&x_issue=4&x_article=1404, page 6.