The Jewish Temples: The Threshing Floor

Bringing the Ark Up to the Temple

Further biblical evidence that the Temple was located above the City of David on Mount Moriah can be found in 2 Chronicles 5:2 where it tells what Solomon did after he completed the building of the Temple:

“Then Solomon assembled to Jerusalem the elders of Israel and all the heads of the tribes, the leaders of the fathers’ households of the sons of Israel, to bring up the Ark of the Covenant of the LORD out of the city of David, which is Zion.”

This passage makes it clear that the Temple could not have been located in the City of David. In order for the Ark of the Covenant to be placed in the Holy of Holies, it had to be taken out of the City of David and brought up to the Temple. And what was the Ark doing in the City of David? It’s where David placed it in a tent when he brought it from Kiriath-jearim to Jerusalem (1 Chronicles 16:1).

Study the diagram on below (figure 4). The City of David is the small finger of land at the bottom, from the dotted east-west line to the south. During Solomon’s reign, the city started growing north up the Ophel (the slanted rise from the City of David to the Temple Mount). Where the Temple is located on this diagram is Mount Moriah, which today is usually referred to as the Temple Mount. And, again, notice how small the area is. The Temple Mount is 400 yards wide, but when you go south, the walls taper down to a width of less than 200 yards. 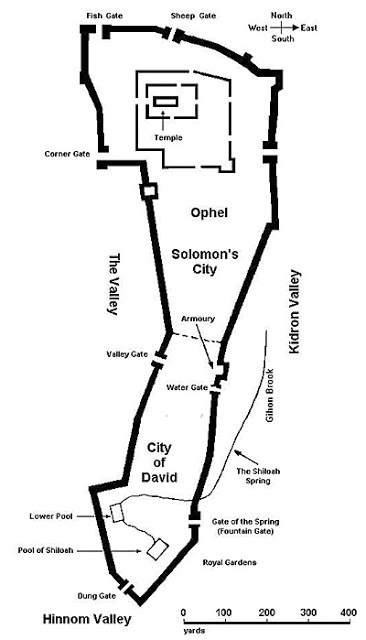 Returning to Cornuke’s basic thesis that the Temples had to be located in the City of David because it is referred to as Zion, it is a thesis that cannot be sustained.

Cornuke’s second main argument is that the threshing floor which David purchased for the location of the Temple was situated within the City of David (2 Samuel 24:18-25). This is also a bogus argument.

Again, Cornuke’s only basis for this assertion is that since the Temple was located in Zion, the threshing floor had to be in the City of David. But the Bible says otherwise in 2 Chronicles 3:1 —

Then Solomon began to build the house of the LORD in Jerusalem on Mount Moriah, where the LORD had appeared to his father David, at the place that David had prepared on the threshing floor of Ornan the Jebusite.

This verse makes it very clear that the threshing floor on which the Temple was built was located on Mount Moriah, and not in the City of David. Furthermore, threshing floors in biblical times were never located inside cities. Instead, they were located on high places in agricultural areas where the wind could catch the chaff.9

Cornuke makes the bizarre claim that the threshing floor that David purchased was actually located over the Gihon Spring in the City of David. But as one of his critics has put it:10

The reason the Temple was not built on top of the Gihon Spring is the same reason people do not put a toilet in the middle of the kitchen table where food is eaten. The temple was built on a threshing floor. Threshing floors are dirty and were never built near springs. The particles would contaminate the water as the chaff from the wheat was blown away from the husk.

All these factors make it clear that a threshing floor inside the tiny City of David is just not a possibility.

In the fourth segment, I’ll analyze the third of Robert Cornuke’s arguments that the Jewish temples resided in the City of David.

10) Steve Rudd, “Temple is not located on top of the Gihon Spring,” www.bible.ca/archaeology/bible-archaeology-jerusalem-templemount-ophel-gihon-spring.htm, page 1.