The Rapture Road Thru 1 Thessalonians (Part 10) 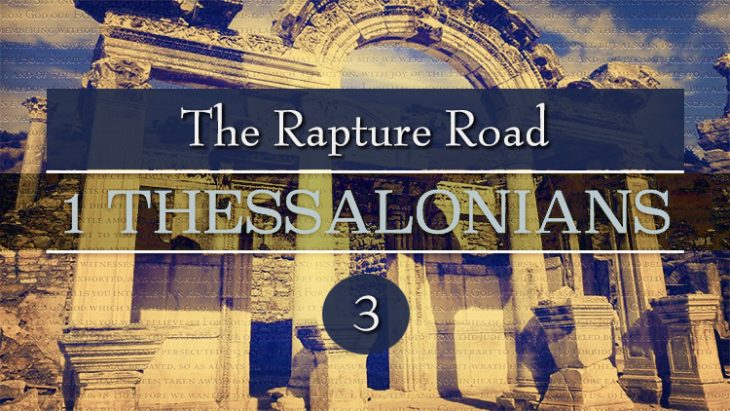 MP3: The Rapture Road Thru 1 Thessalonians 3

Since the first installment of The Truth Will Set You Free podcast series titled “The Rapture Road,” Vic Batista of Miami’s Calvary Chapel Broward and Nathan Jones of Lamb & Lion Ministries have been teaching through the Bible’s prophetic book of 1 Thessalonians in a verse-by-verse study. We will now enter into chapter three.

Vic Batista: We are continuing to travel down the Rapture road in our verse-by-verse study of the book of 1 Thessalonians. We have now entered into chapter three.

Nathan Jones: When it comes to the subject of the Rapture, I’m reminded of Revelation 3 which describes the Church of Laodicea. This church represents, in part, the final phase of the Church during the Church Age. Jesus Himself identified Laodicea as an apathetic, lazy church who thinks she is spiritually wealthy but, in truth, is not. This church preaches sermons a mile wide and an inch deep. Her seminaries are, unfortunately, producing pastors who are no longer passionate about the Word of God, and particularly have no interest in Bible prophecy. Laodiceans have given up on Jesus’ message of His soon return.

What a contrast to the church in Thessalonica as they were very excited about the Lord’s return. We will finally get into the nitty-gritty about the return of Jesus Christ starting with the last verse of chapter three. If Christians were excited about the return of Jesus Christ way back in Paul’s time, then Christians in our day should be even more excited because we are far closer to His arrival.

Nathan Jones: If Christians were excited about the return of #JesusChrist way back in Paul's time, then Christians in our day should be even more excited because we are far closer to His arrival. #Rapture #BibleProphecy Click To Tweet

Vic Batista: Let’s back up a bit to 1 Thessalonians 2:17 and then make our way into chapter three as chapter three continues the line of thought from chapter two.

“But we, brethren, having been taken away from you for a short time in presence, not in heart, endeavored more eagerly to see your face with great desire. Therefore we wanted to come to you—even I, Paul, time and again—but Satan hindered us. For what is our hope, or joy, or crown of rejoicing? Is it not even you in the presence of our Lord Jesus Christ at His coming? For you are our glory and joy.”

“Therefore, when we could no longer endure it, we thought it good to be left in Athens alone, and sent Timothy, our brother and minister of God, and our fellow laborer in the gospel of Christ, to establish you and encourage you concerning your faith, that no one should be shaken by these afflictions; for you yourselves know that we are appointed to this. For, in fact, we told you before when we were with you that we would suffer tribulation, just as it happened, and you know. For this reason, when I could no longer endure it, I sent to know your faith, lest by some means the tempter had tempted you, and our labor might be in vain.”

Excellent passage! Paul noted that in every step of the way Satan was attempting to hinder the work of the Lord by discouraging people. And so, we find Paul sending young Timothy to the church at Thessalonica to encourage them.

Nathan Jones: Remember from earlier in our study that the leaders of the city of Thessalonica had kicked Paul and company out of town. Paul visited there with Timothy and Silas and possibly others for the purpose of evangelizing and church planting. As was their custom, the evangelism team went to the synagogue first to try and win the Jews to Jesus Christ, and when they wouldn’t accept Jesus as Savior, Paul would then next go to the Gentiles. Unfortunately, the Jewish people there raised a big brouhaha and got Paul kicked out of town.

Paul was actually able to establish a church in the short time he was in Thessalonica, maybe three weeks to three months. He ended up leaving a baby church filled with baby Christians behind.

Mentoring the Next Generation

Nathan Jones: Silas had gone on to Philippi and Paul to Athens where he was left to write his letter to the young church they were forced to leave behind. They were not quite ready to stand on their own, and so he was very concerned about this. Since Paul couldn’t return, he sent Timothy back to Thessalonica.

Paul’s letters reveal two particular things about Timothy. One, he was young. He was a young man in the faith and probably served as an assistant or an apprentice to Paul. He may have likely been in his late teens or early twenties. Two, Timothy must have been a very brave person because he was going back into a town that had been openly hostile to the Gospel in order to encourage this new church. Timothy obviously survived the trip because Paul will later write the books of 1 and 2 Timothy, and Timothy was a bit older by then. Timothy exemplified a very brave young man who was willing to suffer persecution in order to help Christ’s Church grow.

Vic Batista: We also get to see Paul’s heart in his letter. Paul was willing to endure a lot of persecution for the Gospel and he also faced ridicule and abuse.

Paul and Timothy’s relationship stands as a reminder of how older Christians should pour their knowledge and experience into a younger generation of Christians in order to equip them to better serve in ministry.

Vic Batista: Living the spiritual life is a daily battle. Christians are able to stand when we serve one another.

Vic Batista: Living the spiritual life is a daily battle. Christians are able to stand when we serve one another. Click To Tweet

Vic Batista: Paul reminded the Thessalonians that being a Christian means we often have to stand tall in the face of affliction. It’s sad that today’s Western Christians barely realize that we are all engaged in a spiritual battle. There are going to be afflictions and temptations, and there are going to be challenges to our faith, but we are not to give up and throw in the towel. We need to continue to trust the Lord and let Him strengthen and protect us.

Nathan Jones: Right, the new church in Thessalonica was facing many afflictions, just as Paul had warned them that it was a natural part of the Christian life. Even as baby Christians they may have had faith, but it’d always be challenged, because the elect are always appointed to be afflicted by Satan’s world system.

Their faith would be challenged in two areas. One, these new Christians lived in a very pagan city. Thessalonica offered a lot of temptations enticing these new believers to go back to their old lives and engage in their sinful lifestyles once again. On top of that, two, they faced great affliction; Paul even called them tribulations, for remaining in the faith.

Notice how 1 Thessalonians 3:4 refers to Christians enduring tribulations. That verse has caused some to claim, “Ah-ha! Paul says that Christians must suffer tribulation, therefore Christians will live on earth during the Tribulation.” That’s Tribulation with a capital “T”. But, that’s not what Paul is saying at all. It would conflict with all the other teachings that Paul gave concerning a coming Tribulation, meaning that seven-year time period when God will pour out His wrath upon the world. Sure, Christians suffer trials and tribulations because we are light-bearers for Jesus Christ, but that does not mean in the slightest that Paul is teaching here that the Church will have to live into the Tribulation. The Tribulation, like the Flood, is all about God’s wrath, and Christians are promised to never have to live under God’s wrath.

Nathan Jones: The #Tribulation, like the Flood, is all about God's wrath, and Christians are promised to never have to live under God's wrath. #Rapture Click To Tweet

Vic Batista: Excellent point! John 16 contains a similarly misunderstood verse. Jesus in John 16:33 says, “These things I have spoken to you, that in Me you may have peace. In the world you will have tribulation; but be of good cheer, I have overcome the world.” This verse is not talking about the Tribulation period either, but rather the little sufferings we endure in our daily lives as Christians.

Nathan Jones: True, Christians obviously suffer trials and tribulations at the hands of man and the hands of Satan, but the seven-year Tribulation that the prophets and Revelation prophesied about is a specific seven-year time period reserved for God’s judgment of the world. The Tribulation can be equated to the Flood. The Tribulation involves God’s wrath being poured out on the world over seven years and 21 judgments. Believers in Christ in this Church Age are not meant to suffer under God’s wrath.

Also, look at the context of the time period in which Paul was writing. The Tribulation did not happen during Paul’s time. Context reveals that Paul wasn’t talking about the capital “T” Tribulation, but rather just our daily sufferings for following Jesus Christ.

Vic Batista: Excellent point! As we get along into later chapters Paul will make this point clearer when explaining that Christians are not going to be here on this earth to endure the wrath of God.

Nathan Jones: Yes, you have to read and interpret the Bible in its proper context. You can’t just pull verses out and then interpret them alone. Context will aid the reader in revealing the meaning of Bible verses.

In the eleventh part of our travels along the Rapture Road and our verse-by-verse study of 1 Thessalonians, we will continue through chapter three.