What About ‘Once Saved, Always Saved’? 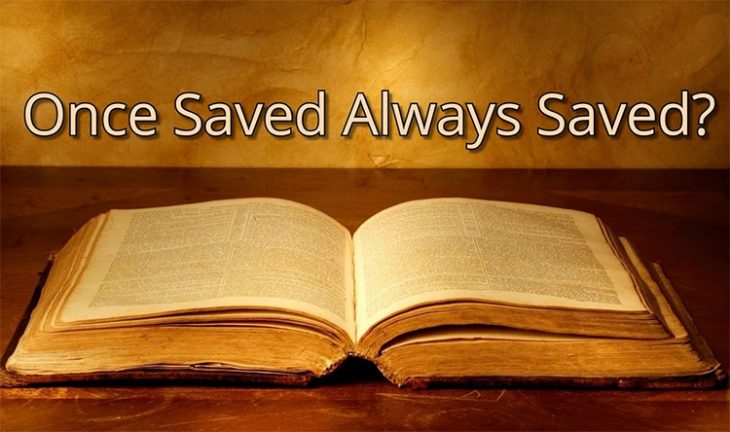 This is probably one of the most frequently asked questions at my Bible prophecy forums, even though it is not directly related to Bible prophecy.

When the question is asked in a public forum, I always avoid answering it because I have found that it is an explosive topic that is not productive to deal with publicly. So, I usually answer the question by saying, “I’m sorry, but your question is not relevant to Bible prophecy, so I would suggest that you discuss it with your pastor.”

For those of you who may not be familiar with the issue, it is a debate between those with an Armenian viewpoint and those with a Calvinist view. The Armenian argues that it is possible for a Christian to “fall from grace” and thus become lost. The Calvinist argues that once a person is saved, it is not possible for him or her to lose their salvation.

I believe the extremes of both viewpoints are unbiblical. The extreme Armenian will argue that every time you sin, you lose your salvation unless you immediately repent. I grew up in a church that taught this theology, so I know it well. It creates an acute sense of spiritual insecurity and contributes to emotional instability. As a kid, I remember witnessing people coming forward time and time again at our church services to confess their sins and be re-baptized over and over, to make sure they were saved.

The ultra-Calvinist position is just as bad in my opinion. According to this theology, God predetermines who is going to be saved and who is going to be lost, and there is nothing anyone can do to change their fate. To me, this concept makes God out to be a monster.

I ran across a tragic example of this view several years ago when I was listening to an audiotape of a sermon that had been delivered at a Baptist Church in Denton, Texas. The guest speaker, who was a well-known theologian, began his sermon by asking, “How many of you here this morning have received Jesus as your Lord and Savior?” After a brief pause (during which I imagine most of the people present raised their hands), the preacher said, “I have bad news for you. Every one of you who raised your hand is lost because you are too naturally depraved to receive Jesus of your own free will. You are therefore trusting in your own works. The fact of the matter is that God has either predestined you to be saved, or He has not, and there is nothing you can do about it.”

When it comes to more moderate views on both sides, I could present a seemingly iron-clad argument on behalf of either position, depending on the verses of Scripture I chose to use. And I have found that when that is the case, the truth of the matter usually lies somewhere in the middle.

Here’s where I have come out on the issue. I believe we are saved by faith apart from works, and I believe we are kept in a saved condition by faith apart from works. But I do not believe that when I accepted Jesus in faith that I surrendered my free will and became a robot. I believe I still have the freedom to reject my faith in word or in deed — in word, by renouncing Jesus; in deed, by persisting to live in open sin.

As long as I am walking in faith with the Lord, I can say with absolute confidence that I am saved. But I believe it is possible for me to lose that faith, and I base that conclusion on experience as well as the Scriptures.

In my experience I have seen far too many professing Christians walk away from their faith, abandoning their families and getting in bed with the world. I recently read the testimony of a Muslim imam (spiritual leader) who for many years was a Southern Baptist pastor. For years he taught that Jesus was God in the flesh and that our only hope of salvation was through putting our faith in Jesus as Lord and Savior. Today, he denies the divinity of Jesus and argues that He was just a great prophet preparing the way for the greatest prophet, Mohammed.

Those who believe in “once saved, always saved,” respond to examples like this by quoting 1 John 2:19 where the Apostle John states that some apostates who had left the Church had done so because “they were not really one of us.” In other words, moderate Calvinists will always argue that those who renounce their Christian faith or who become apostate in their beliefs, never were true Christians in the first place.

I’m sure this is true in many cases, but I’m also equally sure it is not true in all cases. I say that with confidence because there are scriptures which, in my opinion, make it clear that a true believer can fall from grace. Take, for example, 1 Corinthians 15:1-2. In this passage, Paul speaks of the gospel he had preached, “by which also you are saved, if you hold fast the word which I preached to you.” If? The New Testament is full of such conditional statements. Consider Hebrews 3:12-14 —

12) Take care, brethren, that there not be in any one of you an evil,
unbelieving heart that falls away from the living God.

13) But encourage one another, day after day, as long as it is still called “Today,”
so that none of you will be hardened by the deceitfulness of sin.

14) For we have become partakers of Christ, if we hold fast the
beginning of our assurance firm until the end…

Christians are being warned in this passage to resist evil lest they become hardened by sin. And they are further warned to hold fast in their faith until the end. Why the warning if there is no danger in falling away from the faith?

This is a persistent theme throughout the book of Hebrews. For example, in chapter 6 there is reference to those who once were “enlightened and have tasted of the heavenly gift and have been partakers of the Holy Spirit” and then have “fallen away” (Hebrews 6:4-6) How can anyone be a partaker of the Holy Spirit without being born again? This has to be speaking of a true Christian.

In like manner, the Apostle Peter describes people who have “escaped the defilements of the world by the knowledge of the Lord and Savior Jesus Christ” and then have become entangled once again in the world. He says their latter state is worse than their first, observing, “it would be better for them not to have known the way of righteousness, than having known it, to turn away.” He concludes with a vivid illustration, saying that such persons are like a dog who “returns to its own vomit” (2 Peter 2:20-22).

There is another reason I don’t like to spend time dealing with this issue. That’s because when you get down to the bottom line, the two moderate viewpoints agree!

I’ll explain what I mean with an illustration. Let’s consider a fellow — we will call him Tom — who has never had any religious experience in his life. He marries a believing woman, and she starts pressing him to go to church with her. He finally agrees, and the message touches his heart and convicts him. He spends several days reading the Bible and then calls the pastor to inform him that he has decided to accept Jesus as his Lord and Savior.

The next Sunday he goes forward and makes his confession. He is baptized, and he starts attending church faithfully and gets involved in an in-depth Bible study. Within two years he has become a deacon of the church and one of its youth leaders.

The marriage breaks up. Tom begins drinking. He soon moves in with a woman who proves to be a drug dealer. A year later he is found dead from a drug overdose.

The moderate Calvinist would say, “He was never saved in the first place.” The moderate Armenian would contend that “he fell from grace.” Both would agree he was lost. So, why all the argument?

[Note: This teaching is included, along with many other teachings concerning salvation and the afterlife, in my book Eternity: Heaven or Hell?]