The Prophecy of the Week of Millenniums (Part 3 of 3) 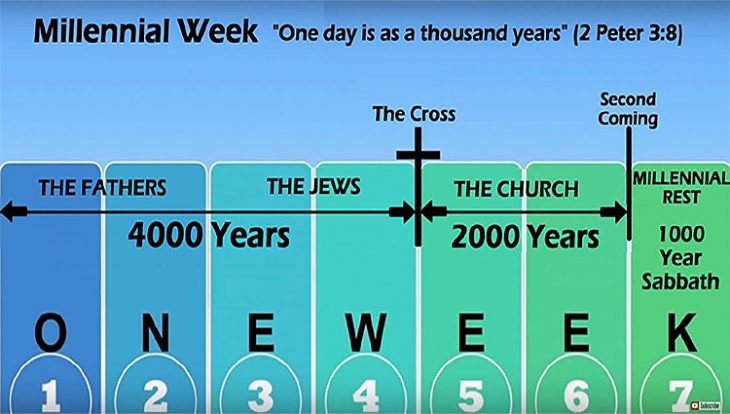 In Part 1, we began to explore how Scriptures contain an implied prophecy that strongly suggests that we are the terminal generation — the one that will experience the Rapture of the Church! We will conclude by gauging just how close humanity has come to the end of the 6,000 years that will inaugurate the Millennial reign of Jesus.

All of this brings us to a crucial question. If this Millennial Day Theory is biblical, then how near are we to the end of the 6,000 years that will inaugurate the Millennial reign of Jesus?

This is not an easy question to answer. The first question relates to the starting point of the 6,000 years. James Ussher (1581-1656), the Archbishop of Ireland in the early 17th Century and a profound scholar, calculated the beginning of the world to be 4004 BC, or exactly 4,000 years before the generally accepted date for the birth of Jesus in 4 BC.14 He based his finding on the biblical genealogies.

Many have challenged Ussher’s calculations. Others who accept them, have argued that the starting date for the 6,000 years countdown should be the date when Adam sinned. That date, of course, is not known, and it has been estimated to be anywhere from a few months after creation to as much as 110 years.15

The second question relates to the starting point for the countdown of the last 2,000 years — from the birth of Jesus or from His death? And in either case, what is the correct date? Some argue He was born in 4 BC; others in 6 BC. The generally accepted date for His crucifixion is 30 AD, but I am personally convinced it was 31 AD.16

Another problem with all these calculations is whether you use normal years according to the solar calendar or lunar years of 360 days. And this is further complicated by the fact that the Jews used a lunar/solar calendar!

So, as you can see, it is not possible to precisely calculate either the beginning or the ending of the 6,000 years from creation. But by any calculations, the conclusion has to be that we are near the end.

There is really a very simple answer to this question. Just as the Western Gregorian calendar is off by four to six years, the Jewish calendar contains an even greater error of over 200 years.

The calculation of the years of the Jewish calendar, according to the Talmud, was done in the 2nd Century AD by Rabbi Yose ben Halafta. His rabbinic chronology is called the Seder Olam Rabbah.17 It is almost universally agreed that the calendar is off by at least 200 years due to the fact that Rabbi Yose guessed wrong as to the length of the inter-testamental period for which there are no biblical records. This period is referred to by secular historians as “the Persian period.” The rabbinical chronology says it lasted 52 years. The accepted chronology of historical experts says it lasted 207 years, amounting to a difference of 155 years.

A remarkable book published in 1997 examines this problem in detail and proves beyond a shadow of a doubt that the Jewish chronology is seriously flawed. It is titled Jewish History in Conflict.18 The author is a New York attorney and Orthodox Jew by the name of Mitchell First. All the errors he points out in the Jewish calendar amount to a total of over 200 years.

With such overwhelming evidence of major errors in the Jewish calendar, why don’t the Jews correct their calendar? The force of tradition is undoubtedly one of the main reasons. Another is what is called in Jewish circles “the doctrine of faith in the pronouncements of the Sages.” This doctrine requires that the Jewish Sages be given the benefit of the doubt.19

There is a third reason for Jewish reluctance, one that most rabbis and scholars are reluctant to admit. Mitchell First denies that it is of any significance, but he quotes three Jewish scholars who bluntly state that they are convinced this reason is the most important.20 It is the idea that the Jewish Sages purposely stated an incorrect chronology of Daniel 9 in order to prevent people from using the passage to accurately predict the time when the Messiah would come.

The bottom line is that instead of this being the Jewish year of 5781, it should, instead, be in the neighborhood of 5991 or later.

There are two prophecies I would like to mention in closing, one from the Old Testament and the other from the New, both of which substantiate the Millennial Day Theory and indicate that we are definitely living in the season of the Lord’s return.

The first was spoken by Jesus in the Olivet Discourse that He delivered to His disciples during the last week of His life. In Matthew 24:32-34, Jesus stated in the “Parable of the Fig Tree” that when the fig tree blossoms again, the generation that witnesses that event will be the one that will be living when the Lord returns.

Throughout the Scriptures, the fig tree is often used as a symbol of Israel. In fact, an indication of this occurred the day before Jesus spoke this parable. As He and His disciples were walking on the Mount of Olives, they came across a fig tree that was barren. Jesus pronounced a curse upon it, and it withered (Matthew 21: 18-19). This was a symbolic prophecy that because the Jewish people (represented by the fig tree) had rejected Jesus as their Messiah (and were therefore barren), their nation would cease to exist.

Then, the next day, Jesus reminded them of the tree and said when it blossoms again (when the nation is re-established), the Lord will return. That prophecy, like the prophecy of the Millennial Days, indicates we are living in the season of the Lord’s return.

The second prophecy that substantiates the Millennial Day Theory is found in Hosea 5:15 through 6:3. This passage says the Messiah will return to Heaven and remain there until the Jewish people acknowledge their guilt in rejecting Him and earnestly seek His face — something that will happen during a time of severe trouble for them (the Tribulation). The Messiah will be gone for “two days.” He will return on “the third day” and will raise up the Jewish people, refreshing them like a spring rain.

As God calculates time, it has been “two days” since Jesus ascended to Heaven, for to God, “one day is as a thousand years, and a thousand years as a day” (2 Peter 3:8 and Psalm 90:4).

The crucial question is this one: Are you ready? If Jesus were to appear in the heavens today to take His Church out of this world before the Great Tribulation, would you be ready? Would you welcome Him with great rejoicing, like a calf released from a stall? (Malachi 4:2). Or, would you crawl into a hole in the ground and cry out for the mountains to fall on you? (Luke 23:30).

To be ready for the Lord’s return at any moment, all you must do is repent of your sins and receive Jesus as you Lord and Savior. You will be born again and receive the indwelling of the Holy Spirit who will seal you for redemption and serve as your spiritual guide and helper as you begin living your life for Christ. When you do this, you should seek out a Bible-believing church that exalts Jesus as the only hope for the world. You need also to witness your faith in baptism and get involved in a Bible study group so that you can start growing in the Lord.

15) Bodie Hodge, “When Did Adam and Eve Rebel?” https://answersingenesis.org/adam-andeve/when-did-adam-and-eve-rebel.