Watching the news has been horrific lately, hasn’t it? Afghanistan has fallen to the ultra-fundamentalist Taliban. Iran’s Ayatollahs remain hellbent on developing a nuclear weapon to annihilate Israel. Islam’s might continues to rapidly spread and threatens the entire world!

The Biden Administration’s hasty withdrawal from Afghanistan has caused a mass exodus of people trying to flee the country after the Taliban retook the government, meeting almost no resistance. For a long 20 years now, the United States has been waging a war against terror, and in the process losing many American and allied lives in order to bring the Afghani people freedom from the Taliban and to make the West safer. But, now the Taliban are back in force, killing Christians and American allies along their meteoric rise to national power.

Across the world, the situation has brought up a lot of bad feelings and troubled sleep. We grieve for the people of Afghanistan. We grieve for our servicemen and women and their families who’ve sacrificed so much, including their own lives. To know that our nation’s two-decades long sacrifice has funneled down the drain in a matter of mere days is both enraging and saddening. We feel for the Afghani people’s lost freedoms. And, we pray for the many missionaries there who are now facing imminent danger and inevitable martyrdom.

Looking at the terrible pictures of the Afghani people hanging onto our aircraft, desperate to escape strictly enforced Sharia law, will be burned into our minds for the rest of our lives. And, we feel outraged over the billions of dollars of U.S. weaponry — drones, missiles, tanks, and humvees — left for the Taliban to turn and aim at Israel and the West. A dark time is looming over that nation, and ours as well.

It’s hard to fathom the roil of emotions. And yet, the Bible clears up the big picture as to where the course of history is heading and how Afghanistan fits exactly into end time Bible prophecy. Afghanistan can be found in a prophecy called — the War of Gog and Magog.

{Find out just what Islam believes, their history and goals, and the end time views that fuel their desire to ignite an apocalypse. And, prepare yourself to witness to the coming influx of Islamic immigrants moving into your neighborhood — all of this and more in an all-new academic presentation made by Nathan Jones titled Witnessing to Muslims in Light of Islamic Eschatology!}

The War of Gog and Magog is set between a massive coalition of nations descended from Noah’s sons Japheth and Ham against Israel (Genesis 10:2-7). The nations are from the territories of ancient Rosh, Magog, Meshech, Tubal, Persia, Cush, Gomer, and Beth-Togarmah (Ezekiel 38:2-6). Their leader is called “Gog, the prince of Rosh, Meshech, and Tubal” (Ezekiel 38:2-3). The battlefield is on “the mountains of Israel, which had long been desolate” (Ezekiel 38:8). The purpose of the invasion is to “plunder and to take booty” and attack the people of Israel (Ezekiel 38:12-16 NKJV).

Let’s now explore what the modern-day equivalents are for these ancient peoples. 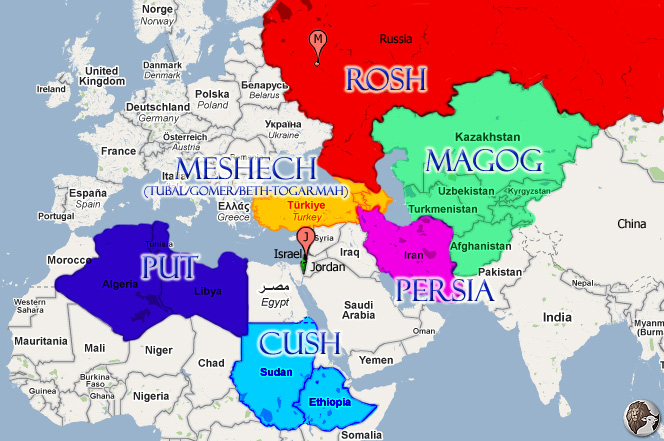 We find Afghanistan within the following list of nations that will comprise Magog.

Some historians point to the former Soviet nations of Kazakhstan, Kyrgyzstan, Uzbekistan, Turkmenistan, Tajikistan, as well as including Afghanistan, as encompassing the land of Magog. Historian Edwin Yamauchi explains that Magog was the “ancient Scythian northern nomadic tribes who inhabited the territory from Central Asia across the southern steppes of modern Russia.” These nations, today consisting of a population of 60 million, are united by one commonality — Islam.

Tenth Century Byzantine writers, such as Ibn-Fosslan, identified a group of Scythians dwelling in the northern parts of Taurus upon the river Volga as the Ros. The early Byzantine Church claimed that the Ros were the people who lived far north of Greece in the area today known as Russia. Rosh is supposed to be “from the remotest parts of the north” (Ezekiel 39:1-2). No other nation exists more directly north of Israel and is more remote than modern-day Russia.

The ancient Moschoi or Muschki or Musku tribe settled in Cilicia and Cappadocia, which is now part of modern-day Turkey. Ezekiel 27:13 notes these people traded in slaves to Tyre and Ezekiel 32:26 refers to them as an ancient bandit nation.

The people of Tubal would have hailed from the ancient Tibarenoi tribe. This land also resides in modern-day Turkey.

The Jewish historian Josephus identified Gomer who “founded those whom the Greeks now call Galatians [Galls], but were then called Gomerites.” Gomer most popularly looks to reference the Gimirrai of the Assyrians, or Cimmerians, who lived in the Black Sea area adjacent to Turkey.

Togarmah, or Beth-Togarmah, which means the “house of Togarmah,” contains an etymological connection between the name Togarmah and the names Turkey and Turkestan. The Tilgaimmu resided between ancient Carchemish and Haran, which is modern-day Turkey and possibly the lands of Azerbaijan and Armenia.

The land of Persia is ancient and long-running and the easiest to identify, only having changed its name to Iran during the last century in 1935.

Cush is another area easy to identify, having split into Ethiopia and the Sudan in more recent history.

Scholars claim that Put is Libya with the possibility that the land also includes Algeria and Tunisia.

Ezekiel describes “Sheba and Dedan, the merchants of Tarshish, and all their young lions” as just observing the battle (Ezekiel 38:13). Sheba and Dedan were Shem’s descendants who settled in modern-day Saudi Arabia. Tarshish could refer to Tarsus located just northwest of Israel, or the island of Sardinia located just north of Carthage in the Mediterranean Sea. But, more than likely, the inhabitants of Tartessus, located on the southwest coast of Spain, denotes the Phoenician merchants who sailed as far as Britain. The “young lions” could then be referring to Spain and Great Britain’s colonies in the New World.

Noticeably absent from this list of Middle Eastern nations are those surrounding modern-day Israel, such as Syria, Lebanon, Jordan, Egypt, Gaza, Iraq, and the Arabian peninsula nations.

Why these “many nations” are not also actively involved in the Gog-Magog Battle is open to speculation, but a Psalm 83 scenario where the seer Asaph foresaw Israel subjugating their surrounding neighbors could be the scenario that grants Israel the peaceful precondition Ezekiel describes that precedes the Gog-Magog invasion (Ezekiel 38:11).

The end result of such a massive invasion by a seemingly invincible army on an unprotected Israel ends up surprising the invaders and shocking the world. The invading nations are, in truth, being manipulated by God, pulled out of their lands as with “hooks in your jaws,” so that those nations feel the Sovereign Lord’s fury (Ezekiel 38:4,18). God drags these specific nations to the “mountains of Israel” to “bring him to judgment with pestilence and bloodshed… flooding rain, great hailstones, fire, and brimstone” (Ezekiel 38:21-22).

God’s ultimate purpose for supernaturally obliterating the invading coalition is so: “Thus, I [God], will magnify Myself and sanctify Myself, and I will be known in the eyes of many nations. Then they shall know that I am the LORD” (Ezekiel 38:23).

God’s supernatural victory over the Gog-Magog invaders allows Him to reintroduce Himself to the world and declare in no uncertain terms that Yahweh is personally defending Israel. Should the people of the world doubt, they only have to look on Israel who “will go out and set on fire and burn the weapons… and they will make fires with them for seven years” (Ezekiel 39:9). As for the invaders’ corpses, “for seven months the house of Israel will be burying them, in order to cleanse the land” in the newly named “Valley of Hamon Gog” by a newly built “town called Hamonah” (Ezek. 39:11-12,16).

{Explore exactly what nations are involved in the coming massive Gog-Magog attack on Israel, when this war will likely take place, and how dramatically different the world will look after God steps directly into the fray in an academic presentation made by Nathan Jones titled Timing Gog and Magog.}

There’s something very important we Christians need to do — we need to pray. We need to pray for the safety of the Afghani people, the boldness of the Christian missionaries there, godly wisdom for our feckless leaders, and that our people make it out of the country before the Taliban’s fatal deadline.