Nathan Jones: The United States has reached a staggering $28 trillion in debt! Every nation in the world has also sunken grossly into debt. What does the Bible have to prophesy about a worldwide financial collapse? Is one imminent?

Look at the massive amount of debt that is piling up on the United States’ ledgers, revealed by this chart from howmuch.net. 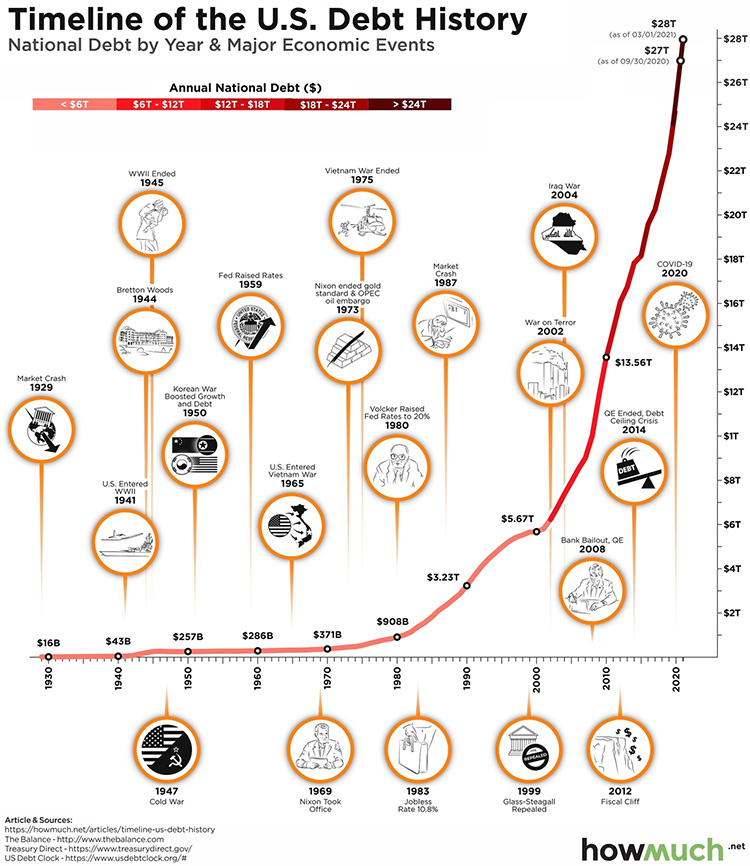 The chart includes a history of America’s debt. One can see what’s called an exponential curve happening, where the debt amount rises exponentially.

Let’s go all the way back to 1929 when the Great Depression started. The U.S. was only $16 billion in debt. Of course, that number is not adjusted for inflation. The debt equaled 16% of our gross domestic product. By 1979, the debt had reached $827 billion. Into the 1980s, due to the Cold War and the arms race, the debt really shot up.

Over the last 20 years, due to the War on Terror, which was basically paid by a credit card, and the Coronavirus pandemic, which has been dealt with by endless spending by the government, our national debt has skyrocketed to $28 trillion. This chart may have to climb even higher if the $3.5 trillion dollar infrastructure plan Biden wants is added.

Estimates show that by the time we reach 2051, the U.S. will be spending twice as much as the gross domestic product, which is the money that our national economy brings in. If something doesn’t change, the U.S. will become like Japan, a nation so in debt that they created loans that their grandchildren are required to pay off.

Source of the Problem

Tim Moore: I think we are certainly leading to a national economic collapse. This issue is not just economic, but moral, because it is immoral to put such a horrific debt load onto our own children and grandchildren and even great-grandchildren. Our generation certainly will not be able to pay the current debt off in our lifetimes, no matter how much taxation the government piles onto the backs of working people.

The Bible does have something to say about this. It gives us a principle. Proverbs 13:22 teaches, “A good man leaves an inheritance to his children’s children.” In other words, a good man, meaning a righteous person, will not only save for their own future needs, but they will leave an inheritance, which is something that is of lasting value to their children and grandchildren. The opposite of that then must be true — an unrighteous man will spend up all of his children’s income.

And, that is exactly what we have done! There is no way we can pay off this level of debt, even if we divided it out among every man, woman, and child in the United States. So, this is something that will continue to burden the generations that come after us. This practice is so immoral.

Nathan Jones: Absolutely! Do you want a scare? Then, go look at the national debt clock as its numbers spin out of control. Remember, too, that our nation is not just paying off the $28 trillion, but there’s interest compounding on that amount.

Where does most of this debt money come from? It comes from bonds, in other words, a debt borrowed from US citizens, so the government has to pay us back using our own taxes. A trillion of that debt goes to China, so we are using our frenemies as lenders. I am reminded of Proverbs 22:7 which warns that the borrower is the slave to the lender. In truth, then, we are enslaved to China and all of our creditors.

Psalm 37:21 reveals, “The wicked borrow and do not pay back.” So, not only is it evil to create massive amounts of debt, but it is also wicked of those who are never intending to pay it back. Frankly, the way the government spends, they’ve shown no plans of ever paying it off.

Let’s not just point fingers at the government, but at ourselves, because outstanding is $12 trillion in personal debt, not counting mortgages, owed across America’s population. So, Americans spend on credit just as much as our government does. The Bible says that doing so is wicked.

Tim Moore: It certainly is wicked. The other reality is, and people don’t often think about this, but this kind of debt load, this kind of rampant spending on the part of those who have no constraint on their own behavior or their own spending habits, will also lead to inflation. Until recently, inflation has been something that we have not seen in this nation since the 1970s. In the 1970s, inflation was so high that it led to a sharp rise in interest rates. So, if you’d wanted to borrow money — no luck. I remember my parents buying a house in 1980 and the interest rate was approaching 20%. Our society today cannot even fathom that kind of interest rate. We’re hovering at around 3% right now.

Nathan Jones: Exactly, inflation becomes the inevitable outcome of high debt. The sad thing is, for those who have been wise and frugal in their spending habits and have set aside money for their retirement or perhaps for their children, their children’s children will find that the value of their savings has depreciated very quickly because of the rising inflation.

Tim Moore: The government actually has an incentive for increasing inflation, because if inflation increases, the value or the liability of this debt load goes down because the dollar has become more worthless. The government realizes that inflation comes in their favor, but it is in the disfavor of its citizens.

Americans need to be calling out to our elected officials saying, “Stop! Stop the foolhardy spending, because you are spending not only our seed corn, but you are also spending our children, grandchildren, and great-grandchildren’s future. Doing so is not only foolhardy, but it is immoral.”

The Idol of Self

Nathan Jones: In Matthew 6:24, Jesus identified where the source of all of this spending comes from: “No one can serve two masters, for either he will hate the one and love the other, or else he will be loyal to one and despise the other. You cannot serve God and mammon (or money).” So, what we are really talking about here is idolatry. It’s not that we love money per se, but that we love what money can do for us.

Nathan Jones: Does this mean that our nation, and even the entire world, is speeding towards an inevitable financial collapse, maybe even another Great Depression, or worse?

Tim Moore: I really do believe we are speeding along that trajectory. This coming collapse is not only financial but even worse — the world is facing a spiritual collapse. Recent polling indicates that those on the Left are harkening more and more towards Socialism.

Look at history, look at what’s happened in Venezuela, where Venezuela was just a generation ago the richest country in South America, and then their foolhardy leaders embraced Socialism and took the country down the path towards bankruptcy. Instead of courting investments from local and foreign sources, the Socialist Venezuelan government started to eat up all of their own nation’s wealth by redistributing it. Instead of helping their masses, they impoverished everyone there. And so, Venezuela is a classic example of what happens when a quasi-capitalistic country that is very wealthy and is doing very well economically in terms of gaining prosperity but turns towards Socialism, becomes impoverished.

We are headed in that very same direction, and quicker than most people realize. I predict that not only will there be somebody like Bernie Sanders for president — a declared Democratic Socialist — but there will be an avowed Socialist who will gain sway in this country very soon because many on the Left are already clamoring for that kind of future. Socialism seems to be where all the energy is focused on moving this nation, spurred on by the Left.

Nathan Jones: Prophetically, this fits. Look at Revelation 6 and 13. These chapters reveal how in the future a one-world government will eventually rise as a financial collapse occurs. A one-world leader, whom the Apostle John calls the Antichrist, will step in and will promise to fix the world’s economy. He promises that the money will start flowing again and that the merchants will become rich.

Prophetically, then, inevitably all of the debt that has piled up beyond belief is going to collapse the economy of the world. This global crisis, I believe, will be triggered by the Rapture of the Church, causing the nations to cry out for a one-world order led by a one-world government.

According to the Bible, we know that this global economic collapse is going to happen, but we also know that God is sovereign. This collapse was prophesied to happen thousands of years ago, so we trust that God has got all of this under control. I believe that before the worst of this happens, the Church will be raptured up to Heaven.

Tim Moore: And so we go back to what Jesus Christ warned when He counseled us to not just store up our treasure in barns, and in places where moths can eat and rust can take away your possessions, but store up our valuables in an eternal investment. That means we place our spiritual treasures in Heaven and don’t rely on this world.

While we advocate for good financial policy nationally, individuals can engage in Financial Peace studies to learn how to stay out of debt. Even more importantly, we need to make sure that we are investing in eternal rewards, and that is done through Jesus Christ.