Extreme Weather in Prophecy (Part 3 of 3) 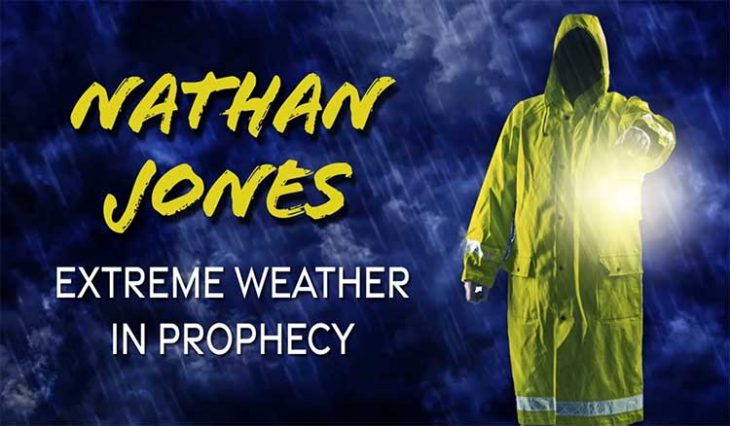 In Part 1 of this teaching about the end times sign of nature as it relates to extreme weather, we learned from the Bible that God does indeed exhibit a pattern of using extreme weather to get a wayward people’s attention and call them back to a right relationship with Him. In Part 2, we scoured the past two years of weather data and confirmed that natural disasters are indeed increasing in frequency and intensity. In this last part, we will look to the book of Revelation to see how God will use natural disasters to judge the world during the coming Tribulation period.

What’s interesting is how scientists are interpreting these extreme natural weather phenomena. In all of the reports, what has been the conclusion of every single article? These natural disasters are due to “man-made global warming.” The O’Driscoll article reports: “Scientists long warned that climate change would contribute to an increase in both the frequency and the severity of freak weather.” How interesting that the article notes an increase in “frequency” and “severity.” Those words sound very familiar. It all sounds rather biblical, doesn’t it?

Germany’s former Chancellor Angela Merkel warned: “We have to get faster in the fight against climate change. Global leaders also have to come to the same conclusion after the UN delivered a code red for humanity.”

So, the world is interpreting these natural disasters, which they agree are increasing in frequency and intensity, as the result of mankind’s pollution problems. But, Christians know better, right? Christians know that God alone is in control of the weather. He controls the weather and not mankind.

Remember that God doesn’t wish that any should perish, but that all should come to repentance (2 Peter 3:9). Therefore, God always warns before He executes His wrath. And, for thousands of years, God has chosen climactic and catastrophic weather to get our attention. Why? Because God controls the weather!

The Bible contains at least 47 different verses that declare that God is in control of the weather. Here are some examples:

So, again and again and again, in at least 47 references, the Bible says that God is in control of the weather. God is sovereign, and nothing happens that He does not allow, either in His perfect will or His permissive will. That is the reason the Bible attributes all natural disasters to God.

God uses these end times signs, such as climactic weather, to wake us up, calling the world to come back to Him. God is warning us that He is upset with our sins. He is upset with all of the evil that’s going on here on the earth. And, He’s crying out: “I love you! Repent and come back to me!”

Yes, freak weather might be contributed to by mankind’s pollutive tendencies, but again it is God who controls the weather. We can take into account, of course, that certain natural disasters occur because the weather is off-kilter due to the curse on the world. But, God still utilizes freak weather in an attempt to try and wake people up to their sins and need for a Savior.

The ultimate climax to all of these weather signs will be a judgment called the Tribulation. The Lord will rescue and rapture His Church out of this world before His true wrath comes upon it. But, leading up to that time, God is going to increase the signs of natural disasters, just like we are seeing, along with the other end times signs such as social, political, war, economic, and so on. These disasters will all increase in frequency and intensity leading up to the Rapture of the Church, and then the world will plunge headlong into God’s wrath during the Tribulation.

As bad as the weather has gotten today, nothing compares to the disasters foretold in the book of Revelation. These weather-related judgments will devastate the world for God will be pouring out His wrath in the Tribulation era due to the corruption of its people.

The Response For Which God is Looking

God’s Word makes it crystal clear that when He sends discipline, the primary purpose is never to punish. Instead, the primary purpose is to call wayward mankind to repentance so that we might be saved. Here’s how the prophet Isaiah expressed it, “For when Your judgments are in the earth, the inhabitants of the world will learn righteousness” (Isaiah 26:9b).

Our God is so merciful. He is patiently sending us one natural disaster wake-up call after another because He never pours out His wrath without warning. And, the greatest “coming wrath” already visible on the horizon is the seven-year Tribulation. Our Lord wants as many people to get saved as possible and become part of the Church before the Rapture happens. But, that great day of wrath is coming one day soon, and when that happens, all of nature is going to break loose!

How does God want us to respond to these end times signs, particularly the sign of nature as it relates to extreme weather?

First, we each need to repent individually for our own rebellion and selfishness. God is calling us to repent. He wants us to repent. And so, call on the Holy Spirit and read the Bible so that we can be discerning.

Second, we need to repent as a nation for removing God from our society, for idolatrously worshiping ourselves, for our 63 million murders in the womb, for our obsession with sexual promiscuity, for our fascination with the occult, and for our lack of support for Israel’s right to exist, among other sins. We as a nation need to accept Jesus as our Savior, for that is the only way by which we will be rescued from the “coming wrath.”

Once Jesus finally returns, the curse on this earth will be lifted and these natural disasters will cease to persist. So, we have hope. We can live by this hope as Romans 13:12-14 proclaims: “The night is far spent, the day is at hand. Therefore let us cast off the works of darkness, and let us put on the armor of light.”