Christmas Prophecies Proving Jesus Is the Messiah (Part 1 of 3) 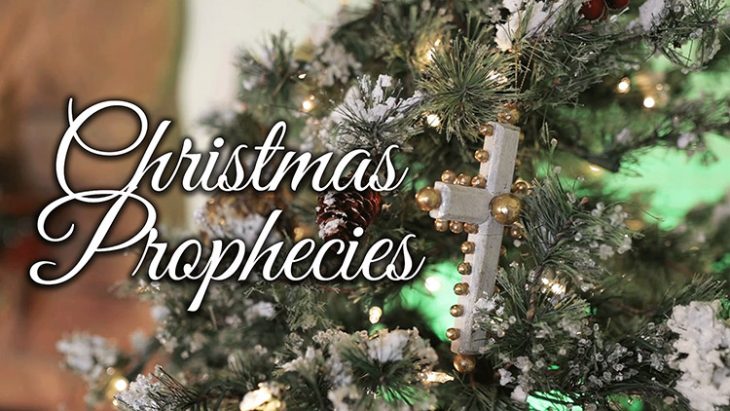 Tim Moore: In a seasonal episode of our ministry’s television program Christ in Prophecy, we reflected on our great anticipation not just for Christmas itself nor for the warmth and gathering of family, but as a time of reflection on the very first advent when Jesus Christ came to this earth.

Nathan Jones: How amazing that there are 300 general prophecies and 109 specific prophecies in the Bible which foretold of Christ’s First Coming! Jesus fulfilled them all, exactly, and in detail. The fulfillment of all of these overwhelming number of prophecies proves that Jesus Christ is indeed the long-awaited Messiah, and so we can place our faith and trust in Him as our Savior and Lord.

When it comes to the First Advent prophecies of Jesus Christ, there are 19 specific “Christmas prophecies” that we are now going to explore. Through these, along with many other evidences, we can know that Jesus Christ is truly the Messiah because He fulfilled prophecies that were given hundreds of years before He was even born.

Nathan Jones: Let’s go all the way back to Genesis 9:26 which prophesied that the Messiah would come from the line of Shem, who was one of the three sons of Noah. “And he said: ‘Blessed be the Lord, the God of Shem, and may Canaan be his servant.'”

Tim Moore: To this day we talk about those people who exhibit Antisemitism, meaning holding a racist view of the Jewish people. Well, that word comes as a derivative of the name and line of Shem, meaning the Semitic people.

Tim Moore: We can also travel down the Messiah’s line starting with Abraham. When he was originally called, he was still known as Abram. God called him to leave the land where he had been raised, leave behind his idol-worshiping family, and follow God to live in what would become the Promised Land. And, because Abram believed in God, and because he obeyed God, God made a promise to Abraham in Genesis 12:3. “I will bless those who bless you, And I will curse him who curses you; And in you all the families of the earth shall be blessed.” That promise has tracked all the way forward through the generations to the Messiah’s birth and beyond to today.

Nathan Jones: The messianic line would not go through all of Abraham’s descendants, for it wouldn’t be Abraham’s son Ishmael from whom the Messiah would derive, but it would be through Abraham’s other son Isaac. We can read about that ongoing promise in Genesis 17:21. “But My covenant I will establish with Isaac, whom Sarah shall bear to you at this set time next year.” It was a prophecy that Isaac would be born and through him the covenant would be bestowed.

Nathan Jones: We also learn that it wouldn’t be to Isaac’s son Esau that the messianic line would derive, just as it hadn’t been through his uncle Ishmael, but the covenant promise would go from Abraham to Isaac and then to his other son Jacob.

Tim Moore: Yes, Esau was the brother of Jacob, but God only granted Jacob the promise. Once Jacob left his home and wandered abroad, he had a dream. Jacob realized after the fact that surely the Lord had been in that place. The Lord had said in Genesis 28:14 to Jacob that He would bless him. “Your descendants will also be like the dust of the earth, and you will spread out to the west and to the east, and to the north and to the south; and in you and in your descendants shall all the families of the earth be blessed.”

God’s promise points to the coming One who would bless both Jew and Gentile alike. It’s not the firstborn Ishmael or the firstborn Esau who was blessed, but rather God chooses according to His own will, and in this case, the younger sons became the sons of promise.

Nathan Jones: Yes, God should have technically chosen the oldest son of Jacob, Reuben. Based on the Old Testament’s account of ancient Middle Eastern customs, but no, God instead picked Judah as we read in Genesis 49:8. “Judah, you are he whom your brothers shall praise; your hand shall be on the neck of your enemies; your father’s children shall bow down before you.” So, the royal line of the Messiah would come through the tribe of Judah out of the 12 tribes of Israel.

Tim Moore: The messianic line would travel down through Judah to David, who was the son of Jesse. David also was not the firstborn son. As a matter of fact, his father Jesse brought before the prophet Samuel seven other sons, but Samuel said to the effect: “No, the Lord hasn’t chosen any of them. Is there any other son left?” Jesse replied, “Well, there’s the youngster. He’s out in the field with the sheep.” And, sure enough, David is he who the Lord chose to bless on that day. God’s added promise that David and His lineage would continue and rule on a throne forever is called the Davidic Covenant. Even today we speak of Jesus returning to reign from the throne of His father, David.

Nathan Jones: And that’s where we get the sixth prophecy in Isaiah 11:1. “There shall come forth a Rod from the stem of Jesse, and a Branch shall grow out of his roots.” This prophecy identifying the Messiah says the Messiah is not just a descendant of Jesse, but he’s also a forerunner of Jesse, which means the Messiah has to be divine.

Tim Moore: There’s one other aspect to explore when looking at the genealogy of Jesus Christ. We’ve been focusing on the men, but there are some specific ladies mentioned in Christ’s ancestry as listed in the book of Matthew in the first chapter. Christ’s ancestry lists Tamar, Rahab, and Ruth.

What I find fascinating about all of them is that they either came from sullied pasts or they came from Gentile nations. And yet, these women were blended into the very genealogy of Jesus Christ.

Think about Tamar who had two sons by Judah. Judah himself, being of the tribe that would be integrated into the messianic line, had an affair. He commits adultery with Tamar. And yet, that’s the line that God chooses to bless. Tamar was the sixth removed, or the great-great-grandmother, of Salmon who married Rahab.

Rahab was a harlot from Jericho, and yet she ended up putting her trust in the God of Israel. She was helpful to Joshua’s spies when they came in to spy on the land. She was the only person, along with her family, whom Joshua saved. She married Salmon who became the father, and Rahab became the mother, of Boaz.

Nathan Jones: That’s wonderful because the Lord doesn’t just pick the mighty men and the kings. Rather, the Bible says that God delights in the poor, the afflicted, and the weak to show His power and grace all the more.

Nathan Jones: The Davidic Covenant is confirmed in Jeremiah 23:5. “‘Behold, the days are coming,’ says the Lord, ‘that I will raise to David a Branch of righteousness; a King shall reign and prosper, and execute judgment and righteousness in the earth.'”

The Messiah would have to fulfill this exact family line, otherwise, He wouldn’t qualify. What’s interesting is that when the Jewish people were ejected from their land in 70 A.D., the messianic lineage was erased going forward because the Jewish people didn’t really follow their lineages after the dispersion of the Jews into the world. So, Jesus had to come at the time and place that He did to prove His genealogy was proper. We can read Matthew 1 and Luke 3 to get the full genealogy of Jesus, both through His father Joseph, and then through Mary.

In the second part of this series about the nineteen Christmas prophecies, we will explore another set.