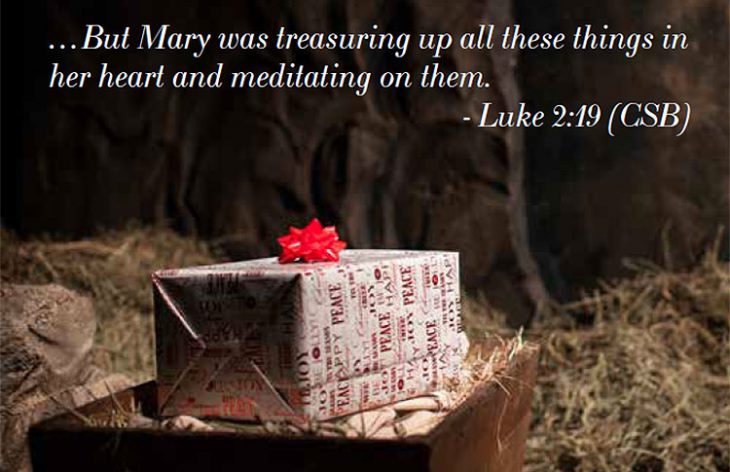 [Note: Our guest contributor, Liz Curtis Higgs, is a Christian author and blogger from Louisville, KY. A popular guest on radio and television, she combines warm humor with engaging Christian insight. For more information, visit her website at lizcurtishiggs.com.]

Was it a census that sent Mary and Joseph on their long journey to Bethlehem? Or was it God?

You know the answer. “Many are the plans in a person’s heart, but it is the Lord’s purpose that prevails” (Proverbs 19:21 NIV). This was God’s plan from the very beginning, now unfolding on the road south from Nazareth.

Mary was “great with child” (Luke 2:5) as they traveled. We can only imagine how uncomfortable, unsettled, uneasy she felt: “Where will my child be born, Lord? I am certain He will survive, but will I?” Though Joseph has no recorded dialogue in Scripture, he no doubt encouraged his young bride, mile after difficult mile: “I heard from an angel too, Mary. I know whose Child you carry. I will care for you and keep you both safe.”

A few miles beyond Jerusalem, the town of Bethlehem finally came into view. Nine months of expectation were over. Time for the Christ Child to appear!

Unto Us a Child Is Born

In a grotto beneath the Church of the Nativity in Bethlehem, a silver star marks the traditional site where Jesus was born. But two thousand years ago, His birthplace looked nothing like this.

Mary labored in a lowly stable and laid the Son of God in a feed trough meant for livestock. However fresh the hay, there was nothing clean about the place, nothing pleasant, nothing fragrant.

Even so, God came to us. Cast His lot with us. Became one of us.

A handful of words, as simple and humble as her surroundings. Mary wrapped Him in strips of cloth, cocooned Him in linen, and held Him close.

Surely she wiped away tears of joy and relief, kissed His brow with trembling lips, counted His fingers and toes, then took Him to her breast.

Everything about this birth was both ordinary and extraordinary.

Unto Us a Son Is Given

The Son of God wasn’t born to a princess; He was born to a poor, uneducated young girl. His first bed wasn’t covered in gold; it was stained with dung. He didn’t come in power; He came as a helpless newborn.

From his very first breath, the Son of God turned the world on its head. He identified with the poor, the meek, the lowly, rather than the rich, the influential, the popular. “He made himself nothing by taking the very nature of a servant” (Philippians 2:7).

He was no coifed and manicured servant, but a humble and lowly servant. The kind of servant who later said, “Sell everything you have and give to the poor, and you will have treasure in heaven” (Luke 18:22).

Mary had treasure on earth: the Son of God, nestled in her arms. We have an even greater treasure: the Spirit of God, residing in our hearts. He is the One who urges us to value what is truly valuable, and let go of things that aren’t treasure at all, but trash. Disposable, unnecessary.

An interesting lesson for the Christmas season, isn’t it? While we spend, spend, spend on gifts that are quickly forgotten, neglected, discarded, the Lord is gently reminding us, “The gift that matters is my Son, who came to earth with nothing.”

We Saw His Glory

And who were the first to come see God’s Son? Of course. Poor shepherds, living in the fields, with no roof over their heads except heaven.

Shepherds in that time were despised and considered unreliable. How like God, to choose them as His witnesses. And oh, how He got their attention!

First one angel, shining in glory, proclaimed the “wonderful, joyous news” (Luke 2:10) and described how and where they would find this heavenly gift.

Then a whole host of angels filled the skies above Bethlehem, praising God and singing, “Gloria in excelsis Deo!” (Angels always sing in Latin, right?) Okay, then. “Glory to God in the highest heaven” (Luke 2:14) will do nicely.

And peace for those who love Him. Peace with God, peace with one another.

The shepherds took off at a trot, the angels’ song still ringing in their hearts. Once they saw the Child, they began spreading the news and giving God the glory. No wonder people were amazed. Shepherds heard a host of angels? Shepherds saw the Son of God?!

Back at the stable, Mary was still processing all that had happened. Treasuring, pondering, storing them in her heart, “trying to understand them” (Luke 2:19).

Being a new mother, and at such a young age, would be overwhelming enough. Who could ever feel adequate to the task of raising God’s Son? Even so, she did what moms do best: she loved her Child.

Not only did Mary trust God; God also trusted Mary with the greatest Gift ever given.

When God gives us an assignment, He never leaves us to fend for ourselves. He is with us, always. Guiding, leading (and occasionally dragging, in my case). Mary was not alone, and neither are we. Whether we are called to manage a household or manage a business — or both at once — God is with us.

Like the angels, like the shepherds, like Mary and her Magnificat, we’re to glorify God with every step we take. That’s our greatest calling and our greatest assurance of peace, every season of the year.