Antichrist a Muslim? Unveiling the Man of Sin 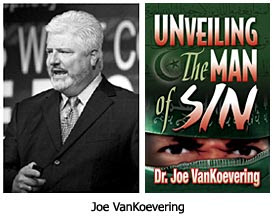 The second book I consulted that proposes a Muslim Antichrist is one published in 2007 by Dr. Joe VanKoevering. It is titled Unveiling the Man of Sin.1 The author is an eloquent and enthusiastic teacher of Bible prophecy. He serves as the host of a television program called “God’s News Behind the News.” He also pastors Gateway Christian Center in St. Petersburg, Florida.

VanKoevering begins his quest for the Antichrist by asserting, that he must be of Assyrian heritage. His biblical basis for this assertion is Isaiah 10:24 — “Therefore, thus says the Lord God of hosts, ‘O My people who dwell in Zion, do not fear the Assyrian who strikes you with the rod and lifts up his staff against you, the way Egypt did.'” Next, he claims that since Antiochus Epiphanes — a type of the Antichrist — came from the Seleucid or Assyrian area of the Grecian Empire (Syria and Iraq), the Antichrist must also come from that area.

He then tries to narrow down the search to one modern day country within the old Assyrian Empire. He does this by pointing out that in Daniel 11 there is a description of the Antichrist’s invasion of the Middle East during the Tribulation. Daniel says the Antichrist and his army will conquer Israel and Egypt but will not enter the area of modern day Jordan. This prompts VanKoevering to conclude that the Antichrist will come from Jordan.

In response I would point out first of all that Isaiah 10:24 has absolutely nothing to do with end time prophecy. Isaiah 10 is a prophecy that God will use Assyria as His “rod of anger” (verse 5) to judge Israel. He urges Israel in verses 24-25 not to fear the Assyrians because “in a very little while My indignation against you will be spent, and My anger will be directed to their destruction.” In other words, God will use Assyria to discipline Israel but He will not allow them to destroy the Jewish people. And furthermore, once He is finished using Assyria as a rod of His discipline, He will destroy the Assyrian Empire.

That’s all there is to the passage. Again, it has nothing to do with end time prophecy or the Antichrist.

I have already addressed the argument that the Antichrist must be an Assyrian because his symbolic type — Antiochus Epiphanes — was from Assyria. Again, there are many types of the Antichrist presented in Scripture, like the Pharaoh of the Exodus and King Saul of Israel, but these types do not mean the Antichrist will necessarily come from Egypt or Israel. But the most important fact to keep in mind is that Antiochus was a Greek, not an Assyrian.

As to the argument based on Daniel 11, it is true that the Antichrist and his armies will not enter modern day Jordan. But the reason given is that the area will be “rescued out of his hands” (Daniel 11:41). That doesn’t sound like a voluntary decision to refrain from invading the area. Rather, it sounds like God prevents the Antichrist from invading Jordan — and for good reason, since the Bible indicates this will be the land of refuge for the Jewish remnant when they flee Israel in the middle of the Tribulation (Revelation 12:13-17).

Besides asserting that the Antichrist must be an Assyrian, VanKoevering also says he must be a “prince” and “the King of Babylon.”

It grieves me that VanKoevering has made this attempt to identify the Antichrist. It is the sort of sensational speculation that has given the whole field of Bible prophecy a bad reputation.

Why does he point to Prince Hassan? First, he argues that “the closest genetic relationship of the Assyrians are with the native populations of Jordan and Iraq.”3 But what he overlooks is the fact that the Hashemite royal family of Jordan is not native to either Jordan or Iraq. The family came, instead, from Saudi Arabia. Members of this family were imposed upon the populations of Iraq and Jordan as kings of these nations by Great Britain after World War I. So, Prince Hassan does not even meet the first criterion stipulated by VanKoevering! 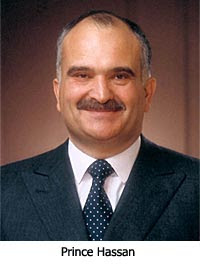 The next qualification of the Antichrist that Hassan is supposed to fulfill is that he carries the title of Prince. This is really irrelevant. When Daniel 9:26 says the Antichrist will be a “prince,” all it is saying is that he will be a political leader. The Bible uses two terms for political leaders — prince and king. The biblical authors could not refer to presidents or prime ministers because those forms of ruling power had not yet developed. Thus, when we are told in Psalm 118:9 “it is better to take refuge in the Lord than to trust in princes,” we are being warned against putting our trust in politicians. The warning is not limited to those politicians who literally have the title of prince.

VanKoevering’s third qualification for the Antichrist — that he be the King of Babylon — is, of course, unfulfilled in the life of Prince Hassan. But VanKoevering argues it could become a possibility since one of his Hashemite relatives, King Faisal, was installed by the British as King of Iraq in 1921. King Faisal, the brother of Prince Hassan’s grandfather, King Abdullah, died in 1933. His son, King Faisal II, and all his family were murdered in 1958 when the Iraqi military mounted a coup d’etat.

VanKoevering believes there is an excellent possibility that the leaders of Iraq will seek to stabilize their nation by inviting Prince Hassan to become king. But that is pure speculation, and there is no indication that the people of Iraq want a king, particularly one that is not even native to their population.

A similar taunt is presented in Ezekiel 28 against the Prince of Tyre. And like the passage in Isaiah 14, the taunt morphs into a description of Satan that could be applied to the Antichrist. Does that mean the Antichrist must also be the King of Tyre? I think not.

One final observation about VanKoevering’s book. I believe that 2 Thessalonians 2:1-3 teaches that the Antichrist will not be revealed until the beginning of the Tribulation. All attempts to identify him before the Tribulation are a waste of time.

In the fourth sement of this series, I’ll look at Joel Richardson’s book.