Swine Flu And Everyone Goes Oink! 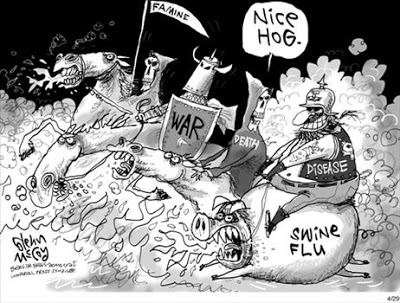 H1N1, also called the Swine Flu Virus, has caught the world’s attention. Swine Flu is a mix of pig, bird and human genes to which people have limited natural immunity. It has symptoms nearly identical to regular flu — fever, cough and sore throat — and spreads similarly, through tiny particles in the air, when people cough or sneeze.

Currently, 169 Mexicans have died from the Swine Flu, including sadly one Mexican toddler visiting Houston, Texas with family. To date 109 cases of contracted swine flu exist in the United States. Outside of North America, countries like Canada, New Zealand, Britain, Germany, Spain, Israel, Switzerland, the Netherlands and Austria all have confirmed cases.

A lot of fear exists out there concerning the Swine Flu. Maybe it would be better called “mass panic.”

The World Health Organization (WHO) has raised their alert level to 5 and will soon to 6. WHO estimates up to 2 million people could die once the flu has run its course. The Red Cross is readying an army of 60 million volunteers who can be deployed around the world in hopes of helping slow the virus’ spread. Egypt is slaughtering all their pigs country-wide. Schools have shut down all over Texas for the next week to limit exposure. Thirty-nine Marines were confined to their base in California after one came down with the virus. People are screaming “pandemic,” wearing face masks, no longer traveling, and hiding in their homes.

Others, like Freedom Watch Chairman and General Counsel Larry Klayman, are declaring Swine Flu to be a possible attack on North America by biological warfare. WorldNetDaily.com reports in their article “Swine flu an act of biological warfare?” (by Chelsea Schilling, April 27, 2009) that “Freedom Watch, a public interest watchdog, believes that there is a very good possibility that the precipitous outbreak of the virus in Mexico, which has now spread to the United States and other western countries, is not the result of happenstance — but terrorism.” Others are claiming the opposite, stating that the crisis is manufactured for the purpose of reaping more global governmental authority.

News sites, blogs and emails are flying all over, fearful that the world is hurtling towards its demise.

For those who study Bible prophecy, the question also has been swirling over whether mankind is now living in the Tribulation and that the Fourth Horseman of the Apocalypse from Revelation 6:7-8 is now riding to kill a “fourth of the earth to kill by sword, famine and plague, and by the wild beasts of the earth.”

At this point in time, all this hysteria is totally unfounded. Medically, only a tiny total of 257 cases of Swine Flu are known to exist worldwide, and of those 169 deaths. In comparison, about 36,000 people die each year of the average flu in the United States.

In the light of history, the swine flu existed back in 1976 and the overreaction to it caused more harm than good, with many getting paralyzed from the very vaccinations President Ford authorized to stop a possible pandemic. In 2003 the global fear was SARS, and then in 2005 the Bird Flu, and they all passed by with little harm.

For a reality test, compare the Swine Flu to a real pandemic — HIV/AIDS. According to Avert.org, and educational site dedicated to the elimination of this devastating immunity deficiency disease, as of 2007 over 33 million people worldwide have AIDS. Nearly 2.7 million new cases are contracted every year!

Nearly 250 cases of Swine Flu does not a pandemic make.

The office of Sen. John Cornyn (R-TX), has released some common sense precautions people can take to avoid the Swine Flu. “The H1N1 flu is spread through human contact, so washing your hands often and covering your mouth with a tissue when you sneeze or cough can help you stay healthy. Stay home if you are feeling sick, and avoid touching your eyes, nose or mouth. Heed the advice of your local public health officials.”

Students of Bible prophecy are very familiar with Matthew 24, where Jesus tells us that as we get closer to His return, wars, famines, diseases, lawlessness and false prophets would increase in frequency and intensity. The rise in all of these shows that Jesus is not soon far off in coming back to Rapture those who are saved before the Tribulation takes place.

During the upcoming 7-year Tribulation, though, when God releases His wrath upon the world for its continued rebellion against Him, Revelation 6:8’s description of mass disease will be a reality, contributing to the deaths of a quarter of the world’s population during that time.

Jesus has not come back for His Church yet in the Rapture. The Antichrist has not been revealed. The seven seals of judgment have not yet been opened. And, the Swine Flu is not the Fourth Horseman of Revelation 6.