Jesus the Lamb and Lion 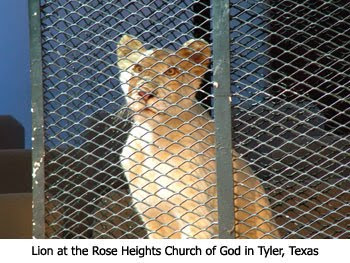 A church that loves Bible prophecy is the Rose Heights Church of God in Tyler, Texas. It is a church of about 1200 people who are on fire for the Lord and who believe in the message of the soon return of Jesus Christ.

Each year, usually in September, I go to Rose Heights to preach on a Sunday morning. Last year, when Pastor Doug Anderson called me to arrange a date for my annual appearance, he asked if I could do a couple of presentations about Jesus as the Lion and Lamb of God. When I told him that I could do that, and that I would be delighted to do so, he then revealed that he had a rather unique idea for promoting the services. He said he was going to arrange for two animals to be on the stage while I preach. On one side would be a lamb and on the other side would be an 800 pound white lion.

Well, when I expressed some concern about that concept, Pastor Anderson assured me that the lamb would be okay because the lion would be well fed. That’s when I explained to the pastor in no uncertain terms that I was not concerned about the lamb, but rather, I was concerned about myself!

As it turned out, the pastor decided that the lamb might be too big a temptation for the lion, so he decided to provide only the lion and told me not to worry because it would be inside a very strong cage the entire time I was teaching. When the morning arrived we received word that when the lion was loaded into its traveling cage its weight crushed the cage. We were told that the animal supplier was going to send the lion’s cub instead.

Now, the pastor was sorely disappointed, but I was delighted because I imagined a little cub about the size of a kitten. But, did I ever get a surprise — the cub turned out to be a young lion that weighed about 300 pounds! He was a beautiful creature, and although he was very skittish when he first arrived, I think my preaching soon put him to sleep.

At Rose Heights Church I answered a question that for me comes up almost every day, “Is there a verse in the Bible that says the lamb and lion will lie down together during the Millennium?” In the next installment of “Jesus the Lamb and Lion,” I will share the answer to that popular question from that message.