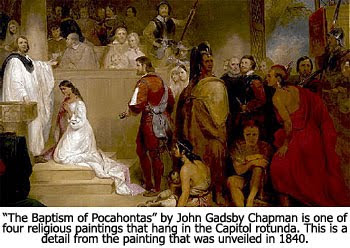 The buildings housing the institutions of our national government in Washington, D.C., are filled with symbols of our nation’s Christian heritage.

In 1999 the Family Research Council published an article entitled, “Hallowed Ground: Washington’s Monuments to Faith, Family and Freedom.” In it they made this observation: “From cornerstones to capstones, from cornices to colonnades, from halls of Congress to the hallowed hillsides of Arlington Cemetery, a mighty causeway of faith courses through the landscape of the nation’s capital.”

For example, in the Capitol rotunda there are eight huge oil paintings depicting scenes from American history. Four of them feature spiritual themes. Two show prayer meetings, one illustrates a Bible study, and the fourth is a picture of a baptism.

The stained glass window below showing George Washington praying is located in the Congressional prayer room. The verse surrounding the figure is Psalm 16:1 which says, “Preserve me O God, for in Thee do I put my trust.” 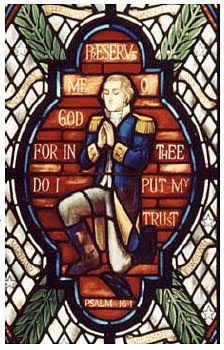 Moses holding the tablets of the Law of God is displayed prominently in a frieze on the exterior of the East side of the Supreme Court building. He is shown in another frieze inside the building. Directly above the bench where the justices sit is another frieze that shows two men sitting with the Ten Commandments between them. One man represents “The Majesty of the Law,” the other is a symbol of “The Power of the Law.” The tablets of the Ten Commandments, showing the numbers one through ten, are on the doors of the courtroom. It is tragic that in 1999 the guides were instructed to tell visitors that the numbers stood for the first ten amendments to the U. S. Constitution!

The aluminum tip of the capstone on the Washington Monument has a Latin inscription which reads, “Laus Deo,” meaning “Praise be to God.” And these are only a few examples!