What did the Early Americans know about dealing with calamity?

In a Christ in Prophecy series titled “America’s Christian Heritage,” Dr. David Reagan interviews a historian who discloses the Early Americans’ unfaltering response to crisis, setting the pattern on how it should be emulated today.

Dr. Reagan: One of the things that really impressed me in your book The Light and the Glory was the way in which the preachers in the early history of America would see a major calamity as a judgment of God. They would immediately rush to the pulpit and preach and say, “This is a calamity. This is a remedial judgment of God. God is calling us to repentance. We must get on our knees.” And people would do it.

The preachers began preaching that this was God’s judgment on the Colonies because they had been drifting away from the stronger Christian faith of their fathers and grandfathers, drifting away from this and God was allowing Satan to attack them through the Indians to visit His judgment to bring them to repentance. They thundered from the pulpits! So many sermons were based on text from Jeremiah that historians have come to call those sermons “Jeremiads.” It has become a class of American preaching, historically speaking.

So that was the clear understanding, especially when the King died or when there was drought. There are examples in The Light and the Glory of how the Pilgrims responded to drought. It drove them into repentance and into the meeting house in prayer. A fabulous story that is well documented is that they spent the entire day in there in prayer. When they finally threw the doors open late in the afternoon, the sky was black with rain clouds. Now, it hadn’t rained a drop in over 11 weeks. They were dependent for food from their crops, along with what they could catch in the bay. The crops had died, but the next morning after that day long prayer meeting, it began to rain a gentle, soaking, soft rain that lasted on and off for weeks and literally revived their crops. 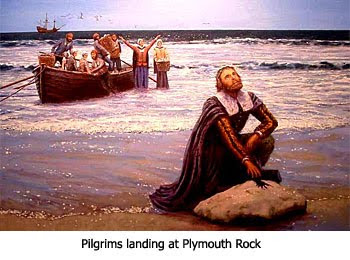 Repentance was called for. The Early Americans knew enough back then that when we are in trouble we need to get down on our knees and seek the Lord.

Dr. Reagan: My wife and I have a devotional every morning and right now we are reading the book of Judges. It is just the same cyclical story over and over — rebellion against God, God brings a persecution upon them, they repent, God raises up a judge. And, it just goes around over and over.

The Bible says that God never changes, and yet I run across pastors all over the place today who say, “Oh, yeah, yeah.” Let me give you an example. I was banned from a local church, a very large church, here in the Dallas area because I preached a sermon that the people received, but the pastor did not. That sermon was that Katrina was a remedial judgment of God upon this nation. He went through the ceiling! He said, “That is the God of the Old Testament. The God of the New Testament is a God of love and grace and mercy. He would never put a remedial judgment upon anyone.”

Rev. Marshall: I have been through the same thing just recently, not too long ago. I was with a pastor in another state that said that he didn’t believe that God visited judgment upon people at all. Judgment was all Old Testament and that there would be no more judgments of God until the Day of Judgment. He said, “Can you show me that in the New Testament?” And I replied, “Give me a few minutes, yes.” The next morning I presented him a list of passages from the New Testament.

Dr. Reagan: Romans 1 talks about how when a society begins to rebel against God, God lowers the hedge of protection, steps back and allows evil to multiply.

Rev. Marshall: Well, welcome to America! Currently, that is exactly what is going on here, because we have certainly rebelled.

Rev. Marshall: Well, those boys knew their Scripture. Today we have gotten seduced by this “bless me Jesus” kind of mentality where we are lacking a Holy fear of God. A Holy fear of God is not talking about a cowering fear.

Rev. Marshall: We lack that sense of awe, and we are dealing with the Creator of the entire Universe here. He has become kind of a buddy, if you know what I mean?

Rev. Marshall: It is like we don’t understand. He loves us, He loves us desperately, but He is not our buddy.

Dr. Reagan: Well you’ve got that right. It is so disconcerting to me if I flip through TV channels and see church services to hear just sermons that are only related to how you can live a positive life. They’re mainly positive psychology. Here is a nation that is going to Hell in a hand basket and somebody needs to be calling people to repentance.

Rev. Marshall: Absolutely! It is the missing ingredient in modern American Christianity. This is exactly why we have no revival, because revival never, never, never, never happens (read your Bible, read history) without repentance first.

Dr. Reagan: That’s right. We certainly need repentance in this nation. It occurred to me years ago when I was traveling abroad. Every time I went to a motel room in any country in the world I knew when I turned on that TV set I was going to see the most violent, blasphemous, immoral American movies and television. We are the moral polluter of the entire planet, and God is going to hold us responsible for that.

Rev. Marshall: That is one of the very few things the Muslims accuse us of worldwide that is correct, of being immoral in that sense. And, you know, we need to take that accusation away from them.