How can archaeology help us better understand the life and teachings of Jesus?

Dr. Reagan: Art sometimes has an impact upon our mental biblical images, and it can be an incorrect impact. Just like the song, “On a Hill Far Away Stood an Old Rugged Cross,” which is a beautiful song, but it’s an artistic interpretation. It just doesn’t coincide with reality because they didn’t crucify people on hills far away.

Dr. Fleming: Also, “Up Calvary’s Mountain,” and hymns like that.

Dr. Reagan: The crosses were instead put on the road to get an impact, weren’t they?

Dr. Fleming: The word “hill” is not mentioned in the text, right, but our hymns are. Part of this is to elevate the meaning of the cross. That’s why often the middle cross is normally taller than the ones on either side for the theological importance. But, yes, normally the crosses would be placed along the sides of roads, and usually using rooted trees. That’s why half the textual references will say, “crucified on a tree.” It is not just meaning “wood,” but most crosses where the criminal carried the crossbar, that is the word “cross.” The crossbar was fastened to a tree on the side of the road. 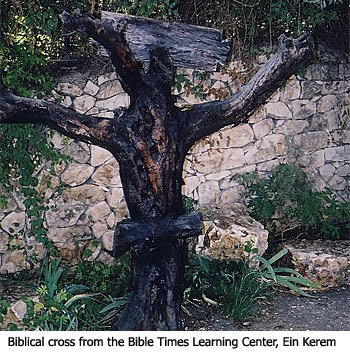 Did you know that in 6 AD Josephus, a contemporary of the time of Jesus, told us that there were 2,000 crucifixions in just one day in Jerusalem? All the trees lining the roads to and from Jerusalem became crucifixion places. So, the cross looked much more like a tree than we would picture in our minds today.

Nathan Jones: What was the purpose? Why so many crucifixions along the roads?

Dr. Fleming: There was an attempt at the time to revolt against Rome. The Romans put them up close so people could see the suffering and realize that is what would happen to anyone who tried to get out from under Roman bondage.

Dr. Reagan: The most realistic depiction that I have ever seen of that was in the movie Spartacus where they had as far as you could see along the road the rebels on crosses.

Dr. Fleming: That’s to intimidate the people as they come to the town along the roads. A road could be in a valley or it can go up a slope. Many could see the crosses from a far distance, but it doesn’t have to be a hill. There is also a lower valley one could see down.

Dr. Reagan: Another example of art is Leonardo Da Vinci’s painting “The Last Supper” which has been etched in all of our minds. Just about everything in that picture is wrong. 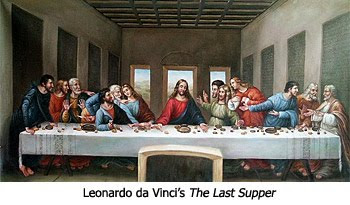 Dr. Fleming: Church art is the culture of the artist, not the culture of the Bible. People ate at tables and chairs in the time of Leonardo, so he painted tables and chairs. They didn’t at the time of Jesus, though. In fact, the text actually said the Apostles reclined at the table. Remember how much trouble artists had for the beloved disciple leaning on Jesus’ chest sitting at a table on chairs? But, no, they reclined at the table. Over 1,000 First Century reclining tables have been found in the Mediterranean world.

One of the exhibits at my museum is a replica of a reclining table. We have replicas for people to take pictures of them. They are not straight tables either, instead they are U-shaped.

Nathan Jones: Can people eat at those tables in your museum?

Dr. Fleming: Yes, we first of all tried making them with mattresses like it should be on the floor, but we found very few Americans can lie down for an hour and still get up. So, we made an authentic one for pictures, but we’ve made it like a coffee table in a van so they can support their backs. We still have it as a U-shaped table, though.

Nathan Jones: Yes, I could see eating on the floor would be hard on the arm.

Dr. Reagan: I know from personal experience that when you go to Israel and you actually see these things, it brings the Bible to life. I remember one time when I was in Caesarea Philippi, I read the story to the people of Peter making his confession of Jesus there and then Jesus saying to him, “On this rock I will build my church, and the gates of Hades will not prevail against it.” I was told that this huge cavern there was considered by some to be the Gate to Hades. I could just see Jesus gesturing towards there.

Dr. Fleming: Any entrances to the underground were called the Gates of Hades. That particular place is a grotto, and it was a pagan place of worship. Many times the New Testament is phrased in a way so we can get a picture. Caesarea Philippi is famous for its grotto entering the underworld. Also, it is the bottom of a 9,000 foot high mountain, so “on this rock I will build my church.” Jesus probably as a good teacher is using what’s around him. 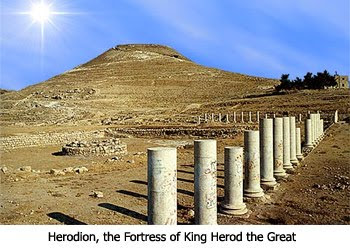 Maybe Jesus was hinting that just as the empire has slaves to move mountains, faith can move mountains. For the rabbis of Jesus day, a mountain stood for something impossible. Faith can accomplish the impossible.