Unfortunately, Camping has a lot of influence within Christendom because he owns the Family Radio Network which broadcasts his messages over 150 radio stations within the United States. His message is also being broadcast via satellites to most of the nations of the world.

Unfortunately, also, his message has been featured widely in the secular press, as is always the case with date-setters. That’s because the press loves to play them up to the hilt in preparation for making fun of them when their date proves false. The result, of course, is that Bible prophecy is subjected to ridicule. 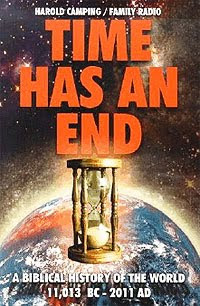 Despite the fact that he was proved to be a false prophet in 1994, Camping has convinced many people of the validity of his new date. His followers have erected billboards all over the nation. Some have emblazoned their cars with the message. Others are handing out T-shirts and bumper stickers. A website has been created at http://www.wecanknow.com/. And mission groups are carrying the message to the four corners of the earth. 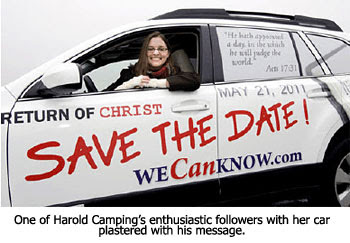 It is all reminiscent of a Vermont farmer by the name of William Miller who developed a theory in the 1820’s, based on Daniel 8:14, that Jesus would return to the earth on March 21, 1844.3

In the King James Version that passage reads: “And he [a saint or holy one] said unto me, ‘Unto 2,300 days, then shall the sanctuary be cleansed.'” This is a prophecy about the desecration of the Temple by Antiochus Epiphanes and its ultimate cleansing. But Miller applied it to the end times and converted the days into years. Assuming the prophecy was given in 457 BC, he calculated that Jesus would return 2,300 years later, on March 21, 1844. Incredibly, he interpreted the “cleansing of the sanctuary” to refer to the purging of the earth by fire at the Second Coming of Jesus!

When Miller’s date came and passed without any sign of the Lord’s return, he proceeded to set a new date for October 22, 1844. When nothing happened on this second date, most of Miller’s followers became totally disillusioned. The whole experience was dubbed “The Great Disappointment.” Miller died in disgrace four years later in 1849.

But that did not prove to be the end of the matter. One small group of Miller’s followers in New England decided that he had not been wrong after all. Led by a young so-called prophetess named Ellen G. White, they began to teach that on October 22, 1844, Jesus had entered the Holy of Holies in Heaven to begin an “investigative judgment” of the works of every person who has ever lived in order to determine their fitness for Heaven.4 They further taught that the reason Jesus did not return to the earth on the October date was because of the Church’s failure to observe the Jewish Sabbath. And thus was founded the modern day cult known as The Seventh Day Adventists.5

Harold Camping’s date-setting parallels that of the Millerite Movement in several ways. First, like Miller, his cornerstone scripture is Daniel 8:14, but he applies the 2,300 days differently. In his first book, 1994?, Camping argued that the Tribulation began on May 21, 1988 and that Jesus would return 2,300 days later, after He had cleansed the Church, resulting in a date of September 6, 1994.

And just as was the case with the Millerite Movement, when Jesus did not arrive, Camping declared that the day he had selected was spiritually very significant. The only problem was that he had misinterpreted its meaning. Instead of it being the day of the Lord’s return, it was the day that the end-time pouring out of God’s Spirit began, ushering in a period when there would be a great harvest of souls, after which the Lord would return.

Having justified his first error in date-setting, Camping then proceeded to set his second date for May 21, 2011.

In the next part of this series examining the madness of Harold Camping’s date-setting, we’ll look at Camping’s method of biblical interpretation.