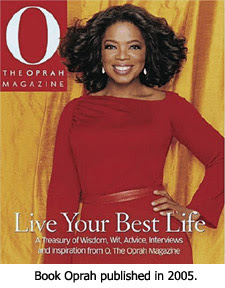 Oprah Winfrey is widely recognized as a spiritual leader. In 2002 Christianity Today declared she “has become one of the most influential spiritual leaders in America.”7 In 2006 USA Today pointed out that she has been referred to as “a really hip and materialistic Mother Teresa,” “a symbolic figurehead of spirituality,” “America’s pastor,” and “today’s Billy Graham.”8

The spiritual pornography that Oprah is peddling is called The New Age Movement. The irony is that Oprah claims to be a Christian and denies being a New Ager! On one of her programs when a Christian in the audience challenged Oprah about being a “New Ager,” Oprah responded:9

I am not New Age anything, and I resent being called that. I am trying to open a door so that people can see themselves more clearly and perhaps be the light to get to God, whatever they may call that. I don’t see spirits in the trees, and I don’t sit in a room with crystals.

Unfortunately for Oprah, this very denial revealed her New Age mentality. Notice that she refers to God as “whatever” a person “may call that.” And she asserts that human beings can be “the light” to get to God. This denial is either a lie about her New Age beliefs, or else she is totally deceived by them.

The essence of the New Age Movement is pantheism — the pagan belief that God is in everything and therefore everything is God.10 This belief stands in direct opposition to the biblical teaching that God exists separate and apart from His creation. A corollary of pantheism is the belief that Man is god and therefore the key to spiritual enlightenment and salvation is to recognize one’s divinity and release it to achieve Christ-consciousness.

Oprah can deny all day long that she is a New Ager, but the truth is to be found in her writings and public statements and in the guests that she features on her programs.

For example, during a program when she was interviewing New Age guru Shirley MacLaine, Oprah said that being born again is the same as “being connected to the higher Self,” and she added that when the Bible says, “ask and it shall be given,” we are being prompted to seek answers from our “intuitive Self.”11

On a program featuring a panel of New Age authors, Oprah said she does not think God is “hung up” on what we believe about Him. “Whatever that force is, it doesn’t care what you call it. He doesn’t have an ego problem.” She went on to say, “I believe in the FORCE. I call it God.”12 On the contrary, the Bible reveals God as our Heavenly Father, as a person, and not as some impersonal force or “it.”

On another program featuring a panel of New Age gurus, Oprah said, “…one of the biggest mistakes humans make is to believe that there is only one way. Actually there are many diverse paths leading to what you call God.” When one of her audience members disagreed, testifying that she believed Jesus is the only way to God, Oprah lost her temper and shouted, “There couldn’t possibly be only one way!” She added that she felt like God cares more about our hearts than He does about what we believe about Jesus.13

Oprah claims that one of the most important books she has ever read is one by Eric Butterworth called Discover the Power Within You. In that book the author wrote, “Jesus did not come to teach us how divine he was but to teach that divinity was within us.”15 Commenting on this totally unbiblical and blasphemous statement, Oprah said that for Jesus to claim exclusive divinity “would make Jesus the biggest egotist that ever lived.”16

One of Oprah’s severest critics, David Cloud, says that “in a nutshell, Oprah’s gospel is ME.”17 As he further points out, she has said repeatedly, “God wants you to love yourself. It starts with you.” Newsweek magazine quoted her in 1997 as saying that spiritual gurus are here “not to teach us about their divinity, but to teach us about our own.”18

As we continue in the next segment to probe into the extent of Oprah’s New Age Church, we’ll look at the menagerie of occultic guests she’s had on her show.

9) Watchman Fellowship, “The Gospel According to Oprah,” www.wfial.org, page 2.

10) For an outstanding presentation of the fundamental beliefs of the New Age Movement, see Matt Slick’s article, “What is the New Age Movement?” This is an article published by the Christian Apologetics and Research Ministry (CARM). It can be found at http://carm.org/new-age-what.

12) Watchman Fellowship, “The Gospel According to Oprah,” page 2.

13) For a video of this remarkable exchange between Oprah and one of the members of her studio audience, see: http://www.wfial.org/index.cfm?fuseaction=resources.oprah.

16) Watchman Fellowship, “The Gospel According to Oprah,” page 3.