The New Age Church: A Course in Miracles 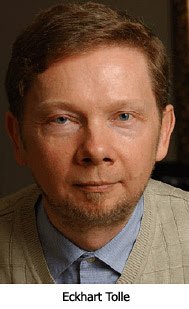 Eckhart Tolle — One of Oprah’s favorite guests is Eckhart Tolle, a German-born Canadian resident who is a recognized leader in the New Age Movement.

He has basically given Hinduism a Western packaging through his view of God as an impersonal life force living in all things. He argues that there can, therefore, be no separation from God because our real self is a part of God. Salvation consists of becoming aware of our real self that has been masked by our ego. He caps off his theology in the traditional Eastern way by arguing that the ultimate destiny of each human is to return our life energy back into the impersonal life force.21

How anyone could endorse such a book and still call themself a Christian is beyond my comprehension. Yet that is what Oprah is doing.

She became so enthralled with Tolle that in 2008 she announced that the two of them were going to launch a ten week Internet study of his newest book, A New Earth. According to Oprah, half a million people from all over the world signed up to participate in the first segment of the online course. They listened to her and Tolle talk for an hour and a half about the first chapter of his book.22

Marianne Williamson — Oprah’s favorite New Age teacher is Marianne Williamson. Her first book was titled A Return to Love.23 It was an endorsement and explanation of a book called A Course in Miracles that has become the Bible of the New Age Movement.24 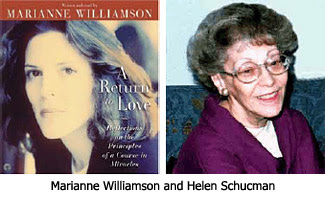 A Course in Miracles was written by a Columbia University professor of medical psychology named Helen Schucman (1909-1981). She claimed it was dictated to her over a seven year period by an “inner voice” that identified itself as Jesus. This was, of course, a false Jesus because the true Jesus does not channel revelation. Also, this so-called Jesus proceeded to deny all the fundamentals of the Gospel. Here are some quotes from the book:25

“God is All in all in a very literal sense. All being is in Him Who is all Being. You are therefore in Him since your being is His.” (Text, page 119)

“Do not make the pathetic error of ‘clinging to the old rugged cross.'” (Text, page 52)

“The Atonement is the final lesson he [Man] need learn, for it teaches him that, never having sinned, he has no need of salvation.” (Text, page 237)

A Course in Miracles was published in 1975. During the 1980s it gradually gained a grassroots following within the New Age Movement and became a cult classic. It did not become known to the general public until 1992 when Marianne Williamson published her book, A Return to Love. The subtitle of the book was: Reflections on the Principles of “A Course in Miracles.” Basically, her book told how A Course in Miracles transformed her life.

Even with the publication of Williamson’s book, A Course in Miracles would have remained under the radar if it hadn’t been for Oprah Winfrey. Oprah praised the book on her program and handed out 1,000 copies of it to her audience. The book immediately shot to the top of the New York Times bestseller list and stayed there for months. In the book Williamson makes the following bizarre observations:26

“We are holy beings, individual cells in the body of Christ.” (page 32)

“Jesus and other enlightened masters are our evolutionary elder brothers.” (page 42)

Oprah’s promotion of this “theological crack” did not stop with the book endorsement. In 2007 she announced that beginning in January 2008, she was going to start broadcasting Williamson’s 365 lessons on A Course in Miracles over her XM Satellite Radio program called “Oprah and Friends.”27

I think the facts are clear. They speak for themselves. I will therefore end as I began by asserting that Oprah is not only the best known and most popular woman in the world — she is also the most dangerous, for she is endangering the souls of millions by deceiving them with Satanic New Age theology.

You need to warn your friends about the theological poison that she is peddling. And you need to put her on your prayer list, praying that her eyes will be opened to the truth that Jesus, and Jesus alone is the only hope for the world.

“…the Spirit explicitly says that in later times some will fall away from the faith, paying attention to deceitful spirits and doctrines of demons, by means of the hypocrisy of liars seared in their own conscience as with a branding iron…” — 1 Timothy 4:1-2

25) For an extensive list of quotes from A Course in Miracles, see the book by Warren B. Smith, False Christ Coming: Does Anybody Care? (Magalia, CA: Mountain Stream Press, 2002), pages 21-22.

27) Marsha West, “Oprah Shifts to the Dark Side,” www.newswithviews.com/West/marsha67.htm, page 2.