The following is an analysis of how the Seventh-Day Adventists view the Tribulation.

The Investigative Judgment — The SDA’s cornerstone doctrine of investigative judgment is both unbiblical and anti-biblical. The doctrine is unbiblical because there is no true biblical basis for it. It is anti-biblical because it denies the finished work of Jesus on the Cross. It is also downright silly in nature because it assumes that Jesus, who is omniscient, must take 160+ years (and counting) to evaluate and judge the works and sins of all believers. 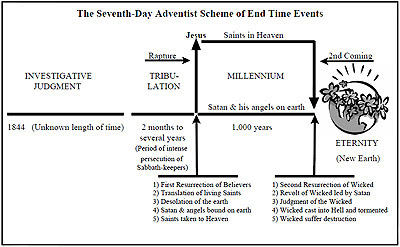 The Tribulation — There are actually two concepts of the Tribulation that can be found in SDA literature. One is the concept that the Tribulation started in 1844 when the “apostate Protestants” began to persecute Adventists. This persecution, of course, intensified (supposedly) when Adventists began to emphasize the essentiality of Sabbath-keeping. The other concept of the Tribulation is that it will be a period of intense persecution that will immediately precede the Lord’s return. Doug Batchelor says he thinks it will last no longer than two months.5 During this period of time, the United States and the Vatican will be unified in forcing the observance of Sunday worldwide as the proper day of worship.

Both views are unbiblical. The Bible clearly teaches that the Tribulation will be a period of seven years during which time God will pour out His wrath, first on rebellious Gentile nations (Revelation 6-11), and then on the nation of Israel (Revelation 12:13-17). The period will begin when the Antichrist signs a covenant that will guarantee peace in the Middle East (Daniel 9:27). It will end seven years later when a great remnant of the Jews accepts Jesus as their Messiah (Zechariah 12:10 and Romans 9:27-28; 11:25-29).

The concept of the U.S. allying itself with the Vatican to force Sunday-worship upon the world is downright ludicrous. This is one of Ellen White’s most flagrant false prophecies. Since the time she wrote this prophecy in the 19th Century, the U.S. has abolished all Sunday observance laws (often referred to as “Blue Laws”), and the country has become increasingly secular and pagan.

Her scriptural justification for this weird prophecy is a good example of the SDA’s tendency toward nonsensical interpretations. She asserted that chapters 12 and 13 of Revelation teach that the Antichrist (the papacy) would dominate the world for 1,260 days before suffering a fatal wound. She converted the days into years (without any textual authority for doing so) and then decided that the ending point to the 1,260 years was 1798 because that was the year when, during the French Revolution, a French general conquered Rome and took Pope Pius VI captive. She then counted backward 1,260 years and proclaimed that the era of papal dominance over the nations of Europe began in the year 538 AD.

Notice that the first thing she did was to violate her own rule that a prophetic year always equals 360 days. This was a rule that had been laid down by William Miller in calculating the date of the Lord’s return, and that rule had been accepted by all Adventists.

The second problem with her calculations is that nothing significant happened in the year 538 AD. The reigning bishop of Rome at that time was Vigilius who never exercised any secular reigning power. Papal power over Western secular governments began during the reign of Gregory the Great who was bishop of Rome from 590 to 604 AD. This is the period of time that is generally recognized by historians as the beginning of the papacy.6

A third problem with Ellen White’s calculations is that the papal setback of 1798 was not the first in Vatican history. During the time period she identified, there were at least 20 anti-popes who set themselves up in opposition to the reigning pope, and there was a period of 70 years, from 1309 to 1378, when the papacy was actually moved to Avignon, France.

The fourth problem with Ellen White’s calculations is that 1798 did not even begin to mark the end of papal influence worldwide. On the contrary, during the 20th Century the papacy was solidified in its power and authority and continues to this day to exercise great authority among the nations of the world. SDA apologists usually respond to the modern day resurgence of the Catholic Church as the healing of the “fatal wound” that is referred to in Revelation 13:3. But this prophecy refers either to a wound experienced by the Antichrist or to the revival of the Roman Empire in the end times.

Finally, the prophecies in Revelation 12 and 13 have absolutely nothing to do with the papacy. They simply declare that the Antichrist (a person) will focus his demonic efforts on the annihilation of the Jewish people during the last 1,260 days of the Tribulation.

In the next part of this series on what the Seventh-Day Adventists believe concerning the end times, we’ll analyze how they view other key eschatalogical events.

5) Doug Batchelor, Anything but Secret! a booklet published by Amazing Facts Ministry (2004), page 22.