Dr. Reagan and I on our ministry’s television show Christ in Prophecy had the pleasure of asking this question of our special guest Caryl Matrisciana. Caryl is a best selling author and filmmaker and is a recognized expert on Eastern religions, contemporary cults, paganism and the occult. She has been involved in the production of more than 60 documentaries over the past 30 years. Her biographical testimony Out of India explains how she grew up under Hinduism in India and lived it in England and the U.S. as a New Ager before accepted Christ as Savior. She joined us warn us of the dangers of equating Yoga with Christianity.

Nathan Jones: What is that third finger, hands on the knees thing Yoga practitioners do when they sit cross-legged?

Caryl Matrisciana: You shouldn’t do a Mudra like that, because that is believed to be part of the prayer where you pull in vibrations. You hold your hand in a particular way and you say that word “Aum” which is a vibration of a god, because everything is god consciousness. Our positions and our repetitive prayers are called Mantras. You say the name of the deity and they believe that the vibrations from saying “Aum” connects you to the vibration that began the world. 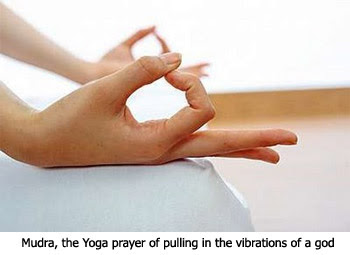 You see, the basis of Yoga is evolution. Evolution is the faith of Hinduism, believing that everything is becoming better. If you are a Bible believing Christian, you understand that nothing is getting better. We are on a decline and we are getting worse. Christianity and Evolution/Hinduism are two opposing worldviews.

Yoga is designed to make you feel better because those who practice it believe it is encouraging the divinity within you to realize your full god consciousness. In actuality, you are getting involved in a lie. It’s a deception.

Why not just do good physical exercises as Paul said that profits our body? A little bit of physical discipline, well that’s certainly fine. But, then, why don’t we meditate on the incredible things that God has done for us, which is what true meditation is all about? Dwell on the promises of God. Don’t put your mind into a vacuum for an experience of wanting to make yourself feel better so that you can come into the presence of God.

Now, when I was a Roman Catholic, we practiced the presence of God. That is when you go into a Roman Catholic Church and the red light is burning on the altar which is to tell you that the Eucharist has made the piece of bread there into the actual body of Jesus Christ. When you come into a Catholic church and make the sign of the cross, you are practicing the presence. You are walking in a mystical worldview with your mind and reason telling you that that piece of bread is actually Jesus that is going to be crucified again during mass so that in a mystical way you can feel the presence of Jesus.

When I became a Bible believing Christian I had to toss that out. I had to repent of those feelings and now rely on the promise which says that Jesus will never leave me. It is a completely different walk of faith versus experiencing through subjectivity. Now, I may not always feel like I am in the presence of Jesus when I walk by faith, but Jesus said He would never leave me. He will never leave me alone. He is my comforter. He is the lifter of my head. He is my boardwalk. He is my sustainer. He is my sufficiency. Those are the promises that I have to depend on in faith.

Dr. Reagan: Christian meditation never consists of emptying one’s mind to become a vacuum. It should be meditating on Scripture, reading Scripture, and thinking about Scripture and the character of God.

Nathan Jones: King David said that quite a lot, that we should meditate on God’s Word day and night. David was not talking about the type of meditation that Yoga is teaching, right?

Caryl Matrisciana: Biblical meditation is the meditation on the character of God. “How good you have been to me, God. How merciful you are to me. Thank you for dying to give me eternal life. Thank you, I am a worm. I’ve been separated from you by sin.” Whereas, in Hinduism you are not considered a worm, instead you are considered divinity, and to be divine you’ve got to waken it. Also, you mustn’t have a low self-esteem of yourself within Hinduism and Eastern Mysticism.

You just have to go to India to see this doesn’t work. In India there is huge poverty, mass starvation, and depression. If Yoga worked in India these people would be elated, but they’re not.

In the last part of this series “Christian Yoga” with guest Caryl Matrisciana, she’ll explain the significant differences between Christianity and Eastern religions.