Escaping from Hinduism: The Beatles

What did The Beatles have to do with Hinduism invading Western culture?

Dr. Reagan and I on our ministry’s television show Christ in Prophecy had the pleasure of asking this question of our special guest Caryl Matrisciana. Caryl is a best selling author and filmmaker and is a recognized expert on Eastern religions, contemporary cults, paganism and the occult. She has been involved in the production of more than 60 documentaries over the past 30 years. Her biographical testimony Out of India explains how she grew up under Hinduism in India and lived it in England and the U.S. as a New Ager before accepted Christ as Savior. She joined us warn us of the dangers of equating Yoga with Christianity.

Caryl Matrisciana: The Beatles were very important in packaging eastern religion to be acceptable in the West. The Beatles of course were out of North England. They were a group of young kids who played their band in a garage in Liverpool. They were discovered by Radio Luxemburg and promoted by English titles that suddenly swept across to America.

The Beatles songs seemed so innocent at first. They were sweet little love songs. I think the point when they changed was when they got rich very quickly from a garage in Liverpool to suddenly having adulation worldwide. It can go to one’s head. For example, John Lennon said that they were “more famous then Jesus.” That was his quote.

I know from my own personal experience in the swinging 60’s as I rose very quickly to being a top model and went from England to America that when you get fame and money so quickly that life becomes kind of empty because you have no value on the richness that you have acquired and so you then start looking for spiritual things. Unfortunately, the spirituality that was around in those days was Eastern Mysticism because these gurus from the East were flooding into the West. Everybody came under their influence.

Maharishi Mahesh Yogi figured an incredible marketing ploy. He used the Beatles and all of the Hollywood celebrities that were involved with them and flew them out free to Rishikesh which is the northern part of India where the goddess flows with all of her energy and powers out of Rishikesh to the whole of India. There they got the indoctrination of these celebrities who are trend setters for the world and they are being filmed all of the time. When they came back to the West they returned indoctrinated.

Dr. Reagan: In fact, the Beatles then put out a new album, Sergeant Pepper’s Band, I believe it was called in which they had an album cover where they were standing in front of a grave for the Beatles. It was symbolic of them burying the old Beatles and becoming the new ones who were very much involved in Eastern religion. 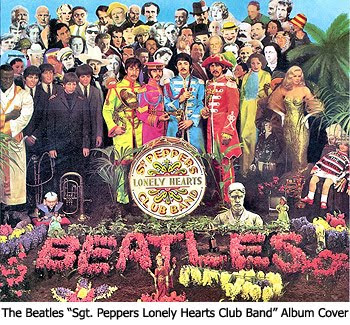 Caryl Matrisciana: Every one of their songs after that as you looked more and more into the lyrics of their songs became darker. They started off with sort of sweet little love songs.

Nathan Jones: Such as, “I Want to Hold Your Hand.”

Caryl Matrisciana: Yes, and then as you got involved in their lyrics through the transformation of lyrics and music we became Eastern devotees whether we liked it or not. Whether we even understood it, “imagine,” “I am you, you are me,” “he is she,” these were all words in the songs which teach that god is everywhere and that we are all divine.

In the next part of this series “Escaping from Hinduism” with guest Caryl Matrisciana, we’ll hear how she came to shed her Eastern spirituality and know Jesus as her savior.