What does Mormonism teach concerning God, Man and salvation?

I, along with Nathan Jones, had the pleasure of asking this question of James Walker, President of the ministry Watchman Fellowship based in Arlington, Texas. James is a former fourth generation Mormon who found the Lord Jesus Christ and since then has dedicated his life in trying to lead people out of the spiritual darkness of the cults. Experts on cults and false religions, his ministry has indexed nearly 1,200 religious organizations, cults, occultic groups, and controversial doctrinal practices to aid people in spiritual discernment.

Dr. Reagan: When Mitt Romney ran in the presidential election in 2008, I watched the morning national edition of Fox News. One of their hosts is a fellow by the name of Steve Doocy. Steve was just very upset on this program why anybody would be concerned about the faith of Mitt Romney. He said he had gone to the Internet, that he had Googled the word “Mormon,” and he said that when he did that he found a whole lot of sites defending Mormonism and claiming that Mormonism is a legitimate expression of the Christian faith.

Doocy then he said he found a lot of negative sites that were attacking Mormonism, and he said i summary, “Let me tell you something about those negative sites. They have the wildest claims I’ve ever heard of in my life. They were absolutely outlandish. Let me give you an example. Many of these sites mention the fact that Mormons believe that they can become gods and that they will be populating planets in the future. That is obviously so silly and outlandish that nobody could believe such a thing. So, I decided all those anti-Mormon sites were simply lying.”

Well, what about it, James, do Mormons really believe such outlandish things? 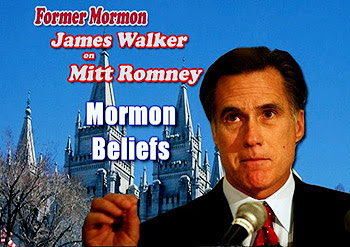 James Walker: I would hope that research would go beyond just Googling the word “Mormon.”

Let me say as a former Latter-day Saint that I was taught consistently that God before he was God was once a man on another planet who had a god over him who also was once a man. I was clearly taught that. It’s in the Temple preparation manuals.

I was also taught that if I was worthy and obedient in that I didn’t drink coffee or tea and if I obeyed all the laws and ordinances of the gospel, eventually my wife and me if we were married in the Temple could receive what the Mormons call Celestial Exaltation. That means we would have the same capabilities as our heavenly parents — as our father and mother in heaven. My wife and I would become a god and goddess over our own earth. And, yes, we would populate our planet with our spirit children. It’s called the Law of Eternal Progression.

Dr. Reagan: So, this Mormon belief that Steve Doocy declared was so outlandish that nobody could believe in it is in reality a fundamental doctrine of the Mormon Church?

James Walker: It’s very clearly taught. In fact, on our website and in most places that are critical of the Mormon church’s theology which are saying doesn’t line up with the Bible, we document what we’re saying. We don’t just make the statements, we give you the page number. At Watchman Fellowship we have a library of over 50,000 items such as books, files, periodicals, and documents going all the way back to the 1800s. So, every time we say something about Mormonism, we document it. We’ll say “this is the Mormon prophet,” “this is the general authority,” “this is the book that you can go down to the Mormon bookstore and buy the book and you can open it to this page where it says it.” We clearly document everything we say.

Dr. Reagan: I want to go back to something that you mentioned and that is the concept of God. Did I understand you to say that Mormons believe that God is an exalted Man?

While we are on this earth right now, if we will join the only true church — the Church of Jesus Christ of Latter-day Saints which is the Mormon Church — and obey their precepts, laws and ordinances, and through our own worthiness be able to get access to the Temple which most Mormons don’t qualify, but if you’re able to qualify and go through the Temple ceremony, then yes, eventually you too can be a god yourself. That’s clearly taught in their literature.

Dr. Reagan: What about the Mormon concept of salvation?

James Walker: Salvation to Mormons is not the Christian salvation by grace through faith. Now, Latter-day Saints will talk about Jesus being the Savior and they will say that what Jesus did is necessary for salvation. They’ll claim that Jesus opened the door to salvation, but they also clearly teach that what Christ did and His atonement is not sufficient to save you. I was taught as a Latter-day Saint in order to be saved I needed what Christ achieved, but I also had to have my own obedience to the laws and ordinances. I had to prove my worthiness.

Proving one’s worthiness means going through the Temple as part of it. To even get inside the Temple, Mormons have to have interviews with their bishop and their state president where they will ask you very direct questions about your personal obedience and worthiness. They’ll ask you, for example, if you drink coffee or tea, as either beverage will disqualify you. They’ll want to ask you if you are a full tithe payer. If you cannot establish that you’ve given 10% of your gross income to the Mormon Church, you’re not allowed to go into the Temple, which effects where you spend your eternity.

Dr. Reagan: Mormonism is the only religion I’ve ever heard of where there’s baptism for the dead. Could you comment on that?

James Walker: It’s based largely on a misinterpretation of 1 Corinthians 15. Basically, the Mormons teach that if you’ve never had an opportunity to accept the Mormon gospel… they believe that true Christianity ceased to exist shortly after the death of the original apostles in the First Century until Joseph Smith restored the truth in the year 1830, so if you lived during that time period where there was no true gospel you had no opportunity for salvation, or even today, if the Mormon missionaries have not come to your door or maybe you didn’t talk to them when they came to knock on your door… if you die in that state you cannot receive full salvation. However, Mormons do believe that after death there’s a temporary place where you go called Spirit Prison, and in Spirit Prison Mormon missionaries from Paradise can come down and share the gospel with you in Spirit Prison. If you accept their gospel there, and somebody gets baptized for the dead for you, you then are on the steps toward full salvation.

Dr. Reagan: So, this is one of the reasons they keep such detailed genealogical records, so they can go back and be baptized for all of their ancestors?

James Walker: Absolutely. I did this myself as a Mormon. I went to the Salt Lake City Temple. I was dressed in total white. I was given different names of dead men. And, I was baptized by proxy for and on behalf of these dead people.

>In the next part of this interview with James Walker concerning Mitt Romney’s Mormonism, we’ll get into what Mormons truly teach concerning the three personages of the Trinity.