Archie and the Gang Go Gay

I wouldn’t be the Christian I am today if it wasn’t for a gang of fictional teenagers named Archie, Jughead, Betty, Veronica, Big Moose, and especially their real life creator Al Hartley.

I also wouldn’t be the Christian I am today if it wasn’t for my dad who introduced me to those characters in his ongoing labor of love in raising me to know Jesus Christ. My father spent his career getting Christian materials in the hands of people who needed to learn about Jesus. While working for the publisher Revell in the early ’80s, he introduced his young son to Spire Christian Comics and the Riverdale High world of Archie.

Created by John Goldwater in 1941, Archie Comics have been going strong now for 70 years. But, the characters didn’t “get saved” until the early ’70s when comic book writer-artist Al Hartley asked Goldwater permission to license the characters. Goldwater, though being Jewish, supported the rewriting of his characters teaching biblical messages. Over the next decade Hartley produced 59 comics including 19 Archie tales, six Bible stories, and many adaptations of famous real-life stories like David Wilkerson’s book, The Cross and the Switchblade.

Hartley didn’t hold anything back with the Christian Archie’s when it came to sharing the Gospel. Special editions titled “Archie’s One Way” and “Clean Slate” explained the plan of redemption in detail, emphasizing Bible verses while intermingling the heartaches and antics of the central characters. 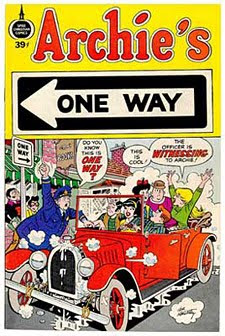 Loveable but klutzy Archie was always trying to do the right thing. Betty learned how to put God’s love first. Other characters like Veronica battled with materialism, Reggie fought with his ego, Big Ethel struggled with self esteem, and Jughead had an endless stomach — issues kids relate to very well. By the end of each issue, the young reader discovered what the Bible has to teach on each subject and received an abundant helping of the Good News. 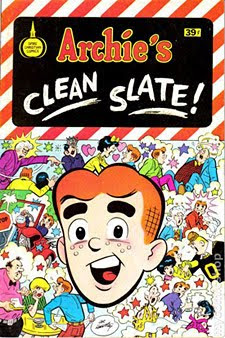 I was so enamored with these simple, biblical messages that I kept all of my Christian Archie’s so that one day my children might also cherish them. Now in their elementary ages, they do.

Trip to the Comic Store

My daughter and I have a monthly tradition of riding down to the comic book store so that she can get an issue of Sonic. We always see the ongoing secular line of Archie Comics intermingled on the racks. This time, though, I received a shock.

That the Archie Comics are a secular run outside of Al Hartley’s time on this earth (he died in 2003) I fully understand, but I wasn’t prepared to see wedged between the Peanuts and Scooby Doo an issue of Archie openly promoting gay marriage! Nor was I prepared for my daughter to see this either. On one hand she knows Archie teaches the Bible, but now she sees him promoting homosexuality, something she already knows the Bible says is immoral (Lev. 18:22; 20:13; Rom. 1:24-27; 1 Cor. 6:9-10; 1 Tim. 1:9-10). How is she to reconcile this?

Jon Goldwater, son of the comic creator and a former rock music manager now co-CEO of Archie Comics, announced his desire to bring the Archie universe into the 21st Century in an “inclusive and updated way.” Under the September 2010 storyline “Isn’t It Bromantic?” a new character named Kevin Keller was introduced. And, Kevin’s gay. He’s also extremely popular, even elected class president. Every panel shows background people enamored with his presence. Kevin goes on to become an Iraqi war hero who takes a bullet rescuing a soldier under his command. Taken to a military hospital, Kevin recoups with the help of his male doctor Clay. They fall in love, and in Issue 16 of “Life With Archie” they get married. Kevin’s absolutely perfect with none of the usual hang-ups people have who are struggling with their sexuality. 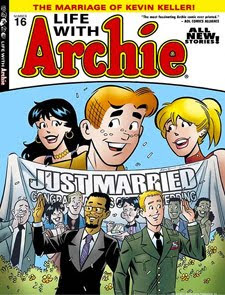 Reluctantly, I picked up a copy of this comic to see why the introduction of Kevin Keller produced the first ever Archie reprint. The gay marriage was tough enough to digest, but I was equally shocked by the classic characters’ immoral lifestyles. Like an episode of Jersey Shore, Archie’s having commitment issues with his wife and prefers work over time with his son. Betty and Reggie are living together unmarried. Veronica’s flaunting her socialite self just like a Kardashian. The teens are now adults, but ones right out of a soap opera.

Going up to the comic counter, I asked the 20-something workers why this comic on gay marriage was in the children’s section. The response, “It’s not graphic” (no pun intended). They saw no problem with the subject of homosexuality being put before children as long as it wasn’t graphic. For graphic lesbianism, they told me, go to Batwoman.

Comics like these are not just in comic stores but in checkout lanes everywhere, like at Toys R Us. They are purposefully targeting children to become accepting of sinful lifestyles. And, the strategy is working. Many Christians even now are supportive of the gay lifestyle in an attempt to be loving, though denying the very sin that is sending people to Hell. I fear the Church has lost the cultural war on the issue of homosexuality.

Encountering a dark universe version of my childhood Christian characters, I cannot but help but feel an effective Christian witness has died. Certainly a whole generation is lost to the perils of immorality.