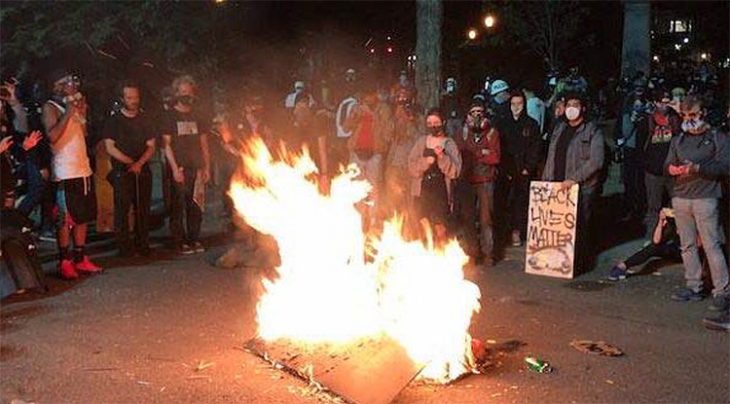 Please notice that I used the word, rioters, and not protesters. There are legitimate, peaceful protesters, but many of their demonstrations have been taken over by anarchists from Antifa and Black Lives Matter. The rioters are not focused on protesting racism or police brutality. No, their focus is the overthrow of the Judeo-Christian values our nation was based upon.

This became very apparent in early August when people in Portland, Oregon, carrying “Black Lives Matter” signs, started burning Bibles and American flags in front of the federal courthouse. As one commentator observed, “It was a scene reminiscent of 1930s Nazi Germany” when Hitler’s storm troopers burned library books.

Christian commentator, Eric Metaxas, spoke out strongly against the Bible-burning during an interview on Tucker Carlson’s TV program. “Too many Americans have forgotten that freedom in the U.S. is utterly impossible without the values that come from the Bible.” He further observed that the Bible and the American flag “have created more human flourishing and have lifted human dignity to a level we’ve never seen in the history of the world.”

Tucker Carlson responded by stating: “Christianity limits the excesses of the state. This is why all authoritarian governments hate it — because when your population worships an actual God, that suggests that you [the government] are not God and there are some things you can’t do.”

Carlson proceeded to point out that this is the reason the Chinese Communist government is currently in the process of cracking down on Christianity. In recent months they have demolished churches, arrested and beat Christians, and forced churches to replace traditional Christian hymns with songs praising the Chinese Communist Party. Further, they have ordered pastors to extol President Xi Jinping and slander the United States in their sermons.

We need to wake up to the seriousness of the internal threat to the democratic institutions of our nation.